The Ordnance Quick-Firing 17 pounder (or just 17 pdr)[1] was a 76.2 mm (3 inch) gun developed by the United Kingdom during World War II. It was used as an anti-tank gun on its own carriage, as well as equipping a number of British tanks. It was the most effective Allied anti-tank gun of the war. Used with the APDS shot it was capable of defeating all but the thickest armour on German tanks. It was used to 'up-gun' some foreign-built vehicles in British service, notably the Sherman Firefly, giving British tank units the ability to hold their own with their German counterparts. In the anti-tank role it was replaced by the 120 mm BAT recoilless rifle after the war. As a tank gun it was succeeded by the 20 pounder.

Before the QF 6-pounder had entered service, the British predicted that it would soon be inadequate given the increasing armour of German tanks. In late 1940 design of a replacement was started, and was largely complete by the end of 1941. A prototype production line was set up that spring, and with the appearance of Tiger I tanks in North Africa, the first 100 prototype 17-pdr anti-tank guns were quickly sent off to help counter this new threat. So great was the rush that they were sent before proper carriages had been developed, and the guns had to be mounted in the carriages of 25-pounder gun-howitzers. These early weapons were known as 17/25-pounders and given the codename Pheasant. They first saw action in February 1943. Fully developed 17-pdrs started production in 1943 and were first used during the Italian Campaign. 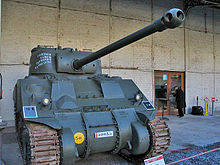 A Sherman Firefly with the 17 pounder

The 17-pdr outperformed all other Allied armour-piercing guns, and was quickly adapted for use on various tank chassis. However, few tanks were capable of carrying such a large gun due to the limitation of the size of their turret ring. It was expected that a 75 mm gun under development by Vickers would be used for tanks, but this did not enter service. The British had plans in hand for a tank - based on the Cromwell then under development - to carry the 17 pounder. However the problems inherent in the modifications meant the result, the Cruiser Mark VIII Challenger, was delayed and relatively few built.

However, the British devised a conversion for their US-supplied M4 Sherman tanks to take the 17 pounder and it was rushed into service in time for D-Day as the Sherman Firefly. The gun (a modified design was produced specifically for the Firefly) had to be rotated through 90 degrees to fit into the turret of the Sherman, i.e. it lay on its side, and an additional box was welded to the back of the turret to take the radio which was moved to allow for the breech and its recoil.[2] More Shermans were converted until about 50% of Shermans in British service were Fireflies.

The British also converted some of their US-produced M10 tank destroyers, replacing the 3-inch (76 mm) cannon with the 17-pdr; the resulting vehicles were called Achilles or just 17 pdr M10.

The 17-pdr was also successfully fitted to the Australian-designed Sentinel tank during trials, though no Sentinels equipped with this gun entered service with the Australian Army.

The 17-pounder anti-tank guns saw action in Korea, against tanks and in general support use against bunker positions. Afterwards, it was largely replaced in the tank role by the Ordnance QF 20 pounder and in the anti-tank role by the 120 mm L6 WOMBAT recoilless gun.

The United States Army did not use the 17-pounder in action, though the gun was offered to US forces with a number of Shermans modified for testing.[3]

The HE shell initially developed for the 17-pdr lacked power: due to the high-powered cartridge; the shell walls had to be thicker to stand the stresses of firing, leaving less room for explosive. Reducing the size of the propelling charge for the HE shell allowed the use of a thinner-walled and more powerful shell.

The 17-pdr produced a very large muzzle flash due to the large amount of propellant in its cartridges. Muzzle blast was also significant, described by crews of the anti-tank gun variant as resembling a hard slap on the chest.

The 17-pdr was a much bulkier and heavier weapon than its predecessor. As a result it had to be towed by a gun tractor such as the Crusader as it could not effectively be moved by its crew alone, especially on poor ground. After the war it was issued to anti-tank units of the Royal Artillery in the British Army of the Rhine (BAOR) towed by the M3 Half Track and when the Royal Artillery Anti-Tank Units were disbanded in 1951, transferred to Infantry battalions in the BAOR (6 per battalion), towed by the Windsor Tracked Carrier.

The complete AP round of a 17 pounder