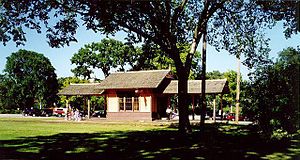 The MTM operates several heritage transportation sites in Minnesota and one in Wisconsin. The museum is actively involved in preserving local railroad, bus and streetcar history.

The MTM was formed in 1962 to save a streetcar that had been built and operated by Twin City Rapid Transit (TCRT) in Minneapolis-St. Paul. Many of the museum's early members were formerly part of the Minnesota Railfans Association, which had organized railfan trips from the 1940s-1960s.

In 2004–2005, the organization's streetcar operations became the Minnesota Streetcar Museum. In addition, a steamboat that was originally built by TCRT in a style similar to its streetcars became the Museum of Lake Minnetonka.

After the first streetcar, TCRT #1300, was successfully restored, other projects were examined in the time before the streetcar could be put on its own set of rails.

The Minnehaha Depot was a former Milwaukee Road depot at Minnehaha Falls. The station, built in 1875, was nicknamed "The Princess" because of its delicate architecture. Trains running on special routes have sometimes stopped at the station, and it was eventually integrated into the area streetcar system. Tracks owned by the Canadian Pacific Railway reach the station, though it is at the disused end of a rail spur.

The Minnesota Transportation Museum pressed this classic General Motors bus back into service as part of the Hiawatha Light Rail opening in June 2004.

Several buses from the 1940s and 1950s are also operated by the museum. Most of the buses in the collection were built by the GMC division of General Motors, and represent the vehicles that replaced the streetcars in the Twin Cities in the 1950s. The conversion from a streetcar to bus system required two years. The last trolley run was on Hennepin Avenue on June 18, 1954.[2]

There is also a Mack-built bus, and a Yellow Coach dating to 1935 that once operated in Rochester, Minnesota, but it has not been restored.

As the museum has acquired much of its bus collection from Metro Transit, the bus company sometimes requests the use of the old buses for special events.

The MTM, along with the historical society of Osceola, Wisconsin, operates a heritage railroad called the Osceola and St. Croix Valley Railway. Excursion trains are operated on trackage formerly owned by Wisconsin Central Ltd., now part of Canadian National Railway.

Excursion trains operate from the Osceola Depot, with service to Dresser, Wisconsin, and southbound to and through the scenic St. Croix River Valley. Trains operate on a regular schedule on weekends and holidays from April-October. Other operations include Special Events trains all season, including brunch, dinner, pizza, pumpkin and Fall leaf viewing trains through the River Valley.

At this time a number of locomotives and pieces of rolling stock are in operation. All equipment has been reconditioned to standard operating condition, including the classic open window coaches, several Great Northern express coaches and a refreshment coach. Locomotives currently in running condition are classic diesel-electric. Steam locomotives such as classic 4-6-0 Northern Pacific #328 have also been used to pull the trains.

As noted, the train route runs from Dresser, Wisconsin to Marine on St. Croix, Minnesota.

The museum also operates the Dresser Depot at the northeast terminus of the line in downtown Dresser. 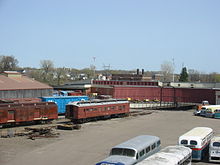 A rear view of the roundhouse, including some of the historic buses

The Jackson Street Roundhouse is the MTM's headquarters in St. Paul, as well as a fully functional railroad roundhouse.

Open Wednesdays and Saturdays, year-round, it is the site where the museum's locomotives and rolling stock come for maintenance and restoration. It is a highly interactive exhibit offering train rides as well as interactive exhibits about surface transportation history of Minnesota and the upper Midwest. The building was erected by the Great Northern Railway in 1907 and is on a site that has been used for rail transportation ever since trains first came to Minnesota.

The roundhouse is also home to the Northern Pacific Railway steam engine 2156, best known to many Twin Cities children from the 1960s / 70s, as Casey Jones' steam engine.

The Rutledge Depot is also housed at the Jackson Street Roundhouse