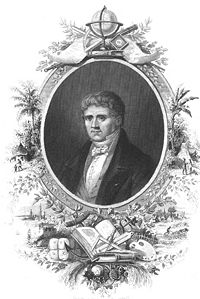 Born in Thisted to an administrator of Danish crown lands, Malte-Brun was destined for a career as a pastor, but chose instead to attend classes at the University of Copenhagen, and became a supporter of the French Revolution and an activist in favor of freedom of the press. Following the harsh censorship laws instituted by the Danish ruler crown prince Frederick in September 1799, he was indicted because of his many pamphlets which contained outright criticism of the government, something which the new censorship laws forbade. The case of Peter Andreas Heiberg, who for similar crimes had been sentenced to exile at Christmas of 1799 did not make Malte-Brun optimistic about his chances. He had already left the country prior to the court sentence (which was first carried late 1800) and had settled first in Sweden, later in the Free City of Hamburg.

Malte-Brun arrived in France in November 1799, and began work on a geography treatise meant as a gift to his adoptive country. This was accomplished with the help of Edme Mentelle, a professor at the École Normale; together, they produced Géographie mathématique, physique et politique de toutes les parties du monde (6 vols., published between 1803 and 1812).

A regular contributor to Journal des Débats, he was also the founder of Les Annales des Voyages (in 1807) and Les Annales des Voyages, de la Géographie et de l'Histoire (in 1819), which encouraged observations and reports as a basis for research. He became well known after contributing Tableau de la Pologne, a treatise on the geography of Poland (in 1807, as the First Empire troops established French tutelage in the region). In 1822-1824, he served as the first general secretary of the newly founded Société de Géographie.

He died in Paris in 1826, as he was drafting the final version of his major work, the Précis de Géographie Universelle ou Description de toutes les parties du monde. His name was given to a street in both Paris (XXe arrondissement) and Thisted.