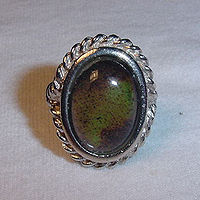 A mood ring is a ring which contains a thermochromic element, such as liquid crystal. The ring changes color in response to the body temperature of its wearer. The color is said, by some proponents, to indicate the emotional state of the wearer.

The mood ring was invented in 1975 by two New York inventors, Josh Reynolds and Maris Ambats, who bonded liquid crystals with quartz stones set into rings.[1] They initially retailed for $45 for a "silvery setting" and $250 for gold, and first sold at Bonwit Teller,[2] rapidly becoming a fad in the 1970s.[3]

A mood ring is a specialized liquid crystal thermometer, wearable on the finger. The ring is typically ornamented with a faux gemstone (usually made of quartz or glass) which is either a clear capsule filled with thermochromic liquid crystal, or has a thin sheet of liquid crystal sealed underneath. Changes in temperature cause the crystal to reflect different wavelengths of light which changes the color of the stone. The liquid crystal used in mood rings is usually set up to display a "neutral" color at the average human skin temperature, which is approximately 98.6 °F (37.0 °C).[4]

The theory behind the idea that the ring indicates the wearer's mood is based on a claim that body heat fluctuates with the emotional state of the wearer. Human body temperatures are known to vary by small amounts (less than 5°C) over the circadian and menstrual cycles and when the body is fighting an infection. Variations in ambient air temperature appear to have a larger effect on the temperature of the ring than changes in the body temperature of the wearer.[citation needed][original research?] It appears that no direct correspondence between a particular mood and a specific color has ever been substantiated.

Mood rings were a short-lived fad of the mid-1970s (like the pet rock) and were especially popular with young girls. In a 1976 Peanuts comic strip, Peppermint Patty gets so angry at Charlie Brown that her mood ring explodes.