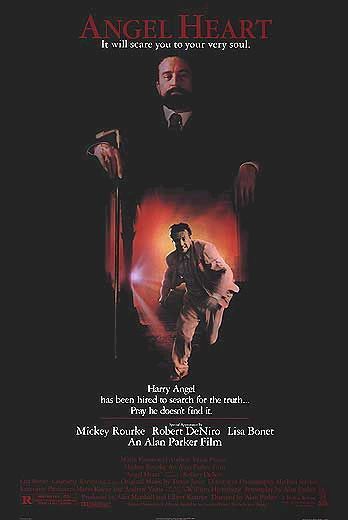 "Angel Heart" is a 1987 written and directed by , and starring , and . The film is adapted from the novel "" by , and is generally faithful to the novel with the exceptions being the introduction of a child of Epiphany Proudfoot conceived at a voodoo ceremony by "a devil", and that the novel never leaves New York City, whereas the film opts for a New Orleans ending, and has a more somber tone.

The movie opens in January 1955. Mickey Rourke plays Harry Angel, a seedy in . Louis Cyphre (De Niro) hires Angel to locate Johnny Favorite, a popular who was severely injured in and hospitalized with profound neurological trauma. Cyphre has discovered that the hospital may have falsified Favorite's records and wants Angel to find out what happened, as Favorite owed a debt to Cyphre.

But there's more to the case than initially appears, as the debt in question is Favorite's soul, and Cyphre is not human – his very name, Louis Cyphre, is a play on the name . His true objective is hinted at by a scene in which Cyphre carefully shells and salts a hard-boiled egg before slowly biting down into it with obvious relish – after remarking that in many cultures it represents the soul.

Angel travels to as he digs deeper into the case, delving into a world of and and growing increasingly worried for his own safety. One informant after another that he speaks to turns up dead. Angel fears becoming a suspect in their murders and he begins experiencing terrifying dreams. One contact, Epiphany Proudfoot (), beautiful 17-year-old daughter of a deceased voodoo priestess and, she eventually admits, Favorite's daughter, becomes his lover. In the film's disturbing Angel is faced with the fact that he is Johnny Favorite himself, having attempted to escape the selling of his soul to the Devil by taking the place and identity of the original Harry Angel, a soldier returning from the war whom Favorite had abducted, ritually killed, and cannibalized. Angel's conviction that he is simply being framed for the bloody murders is shown to be wrong. Acting under the influence of Cyphre he has committed and suppressed the memory of each of the murders, the last being that of Epiphany, murdered with a pistol shot in her vagina. With Johnny finally remembering the truth, and since he will be executed for the murders, Cyphre can at last claim what is his: Favorite's immortal soul. Over the end credits, there is a lengthy sequence of a silhouetted Angel descending in an ancient iron Otis elevator cage, apparently on his way to .

"Angel Heart" gained attention and controversy even before its release. Bonet was previously known for her role on the family-oriented "", and several seconds of her extended, graphic and blood-drenched sex scene with Rourke had to trimmed in order to secure the film an 'R' rating on initial release.

Some blamed the controversy for Bonet's departure from "The Cosby Show," even though she starred in another Cosby-produced program, "A Different World" which premiered in the Fall of .

"Angel Heart" received mixed reviews, and just about broke even. [http://www.imdb.com/title/tt0092563/business] After being released on home video it became something of a , appreciated for its unsettling tone, excellent cinematography (by Michael Seresin), its sad and eerie score (by Trevor Jones), and its unusual but effective blend of genres.

There are repeated motifs in the film:
* The Girl of My Dreams: Harry is haunted by this tune during the entire film, and the film score recycles it numerous times during the film. He later learns from Epiphany, who was singing the lyrics in a bathtub, that it was Johnny Favourite's best-known tune. Cyphre later plays a phonograph of it when forcing Harry to remember his life as Favorite. The actual song was written by in 1927, recorded by and the Casa Loma Orchestra featuring the vocal by Kenny Sargent. The vocal in the film is sped up from the original 78 rpm to 83 rpm to gain a higher, more warbling effect.
* Weapons: Harry can be seen finding the exact murder weapon, every time that he visits a character, before their death, which foreshadows the act that Harry carries out on all of the characters that end up being dead. For example, while searching the Doctor's home for any pharmaceuticals, Harry comes across a handgun hidden in a drawer, with a 'Holy Bible' which later turns out to contain the handgun's rounds.
* Backwards rotating fan: The theme of a backwards rotating fan is present during every episode in which Harry commits a murder offscreen, which Harry forgets about, thinking Favorite committed the murder (which turns out to be true, in a way.) It is a reference to the fan that was present at the demonic sacrifice of the original Harry Angel. The act of fanning in classic middle eastern ritual also represents the act of separating the wheat from the chaffe, the good souls from the bad.
* The mirrors: Every time Harry looks into a mirror, he has flashbacks to the sacrifice on , though presented only as obscure visual cues, accompanied by the sound of a heart beating. Cyphre taunts, "That's it, Johnny. Take a good look. No matter how cleverly you sneak up on a mirror, your reflection always looks you straight in the eye."
* Names: The character's have special meanings in the film:
**Harry Angel: derived from an "", though its meaning is more clear when considering the novel on which the film is based, "Falling Angel", which is synonymous with and losing faith with God.
**Johnny Favorite: Lucifer was known as God's favorite angel.
**Louis Cyphre: While obviously a pun on "Lucifer", the last name also can be taken to mean "", a mystery.
**Evangeline Proudfoot: In the film, it is told that Evangeline is named after the poem "", about a woman who searches for her true love. (The film's characters incorrectly say that the woman fruitlessly waited for her love to return.)
**Epiphany Proudfoot: Implies epiphany, or revelation of mysteries, as she is the key to Harry realizing his true nature.
**Winesap and MacIntosh: The names of Louis Cyphre's lawyers are varieties of apple. Apples symbolize temptation (Adam and Eve).
* Dogs: Any time that Harry encounters dogs throughout the film, their reaction to him is of a violent nature. It is popular superstition that dogs possess a sixth sense, and their reactions indicate that Harry's soul is damaged.

* as Harry Angel
* as Louis Cyphre
* as Epiphany Proudfoot
* as Margaret Krusemark
* as Ethan Krusemark
* as Toots Sweet
* as Dr. Albert Fowler
* as Connie
* as Det. Sterne
* as Spider Simpson, Bandleader
* as Herman Winesap
* as Nurse
* as Izzy