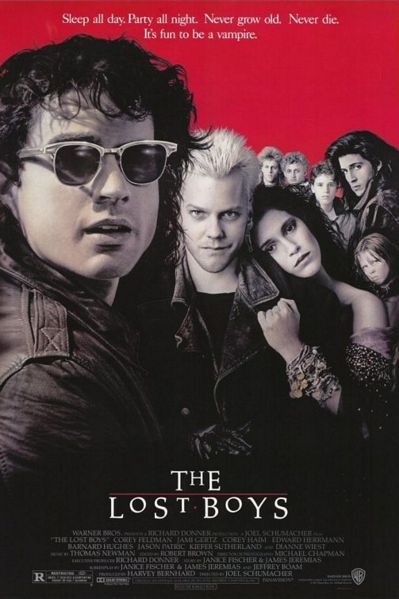 "The Lost Boys" is a 1987 American comedy- about two young ns who move to and end up fighting a gang of teenage s.

The title is a reference to the Lost Boys in 's stories about and .

At a boardwalk concert, Michael is fascinated by a beautiful young woman. After following her along the boardwalk, he sees her getting on a motorcycle with David, the leader of the local gang. The following night he finds the young woman again and learns her name is Star. As they are about to leave together on Michael's motorcycle, David reappears and provokes Michael into following him and his cadre. They drive to some sea-cliffs where Michael is almost baited into going over the edge. Michael punches David, who merely sees potential in Michael and invites him to the gang's lair, an old dilapidated hotel that sank beneath the ground.

At the hotel, the gang leads Michael through an unsettling initiation involving Chinese takeout. At the end, an annoyed Michael takes a swig from a bottle which contains a dark unknown liquid (which turns out to be vampire blood). The gang then takes Michael out to where some railroad tracks cross a foggy gorge; one by one the group jumps off the tracks and out of sight. Michael realizes they are hanging from exposed reinforcement bars. They talk him into joining them under the tracks. As the train roars overhead, the reinforcement bar shakes and one by one the members of the gang fall into the foggy gorge, but they do not die; Michael can hear them goading him to fall. Unable to lift himself up, or hold on any longer, Michael falls in as well.

Michael wakes up in his bed still in the clothes he wore the night before. He is groggy and disorientated. It's mid-day and he has no clue how he got there. He soon starts showing the symptoms of vampirism: he sleeps all day, he becomes sensitive to sunlight, and his reflection is transparent. Michael returns to the gang, and they reveal that they are indeed vampires and murder a group of teenagers at a bonfire party. David explains that Michael must feed in order to survive, but Michael refuses to kill and leaves.

With the help of Star, Sam, and two relatively inept teenage vampire hunters named Edgar and Alan Frog, Michael sets out to break his curse by killing the "head vampire". This proves difficult, as it is not immediately evident who this is. Sam and the Frog Brothers suspect Lucy's new boyfriend Max, but their tests during his visit to their house all indicate he is human.

The teens determine that David must be the head vampire. After unsuccessfully trying to kill him in their lair, although Marko is staked by Edgar, they prepare for a retaliatory attack. That night, the vampires invade the Emerson home. With the help of Sam's dog, Nanook, the defenders pick off the gang-members one by one, with Sam shooting Dwayne through the heart with an arrow, Nanook knocking Paul into a bathtub full of holy water and garlic and Michael impaling David on some deer in his grandfather's workshop. However, Michael is still a vampire, and Max then reappears and reveals himself to be the head vampire after all; the tests hadn't worked because he had been freely invited into the house. As Max is about to bite Lucy's neck, her father crashes his through the wall of the house; the vehicle's hood is piled up with large fence posts, and one of them impales Max, killing him. These fence posts had earlier, inexplicably, been put into the ground by Grandpa with the spiky end up. As the others stare in amazement, Grandpa casually gets a from the refrigerator and remarks, "One thing about living in Santa Carla I never could stomach... all the damn vampires."

and (a veteran of vampire films) were both original choices for Grandpa. Wynn died right before filming and Carradine was too ill.Fact|date=April 2008

Though almost all of 's scenes are deleted from the film, and the only true appearance she makes is over Lucy's shoulder in the video store, she still received billing in the film's opening credits. Her scenes can be viewed in the 2004 "Lost Boys" DVD special features.

*The entire movie was filmed in the city of Santa Cruz, California, and the surrounding Santa Cruz mountains. The amusement park scenes were filmed at the . This is the same park that appeared in "" (1986) (TV) (also starring Kiefer Sutherland). The Boardwalk also was seen in the sequel "" (1983) and "" (1971).

* The original screenplay written by 'Janice Fischer', and James Jeremias was about a bunch of "Goonie-type 5th-6th grade kid vampires", with the Frog Brothers being "chubby 8-year-old Cub Scouts", and Star being a boy instead of a love interest. Joel Schumacher hated that idea and told the producers he would only sign on if he could change them to teenagers, as he thought it would be sexier and more interesting.

* Executive producer Richard Donner originally intended to direct the movie himself, but as production languished, he moved on to "" (1987) - and eventually hired for the job.

* The movie didn't originally end on a joke. After the scene with Grandpa at the refrigerator, it was supposed to cut to the surviving Lost Boys regrouping in the sunken hotel. The last shot was of a mural on the wall, made in the early 1900s, with Max in it - looking exactly the same as he did today. All of this appeared in an early draft of the script, but ultimately was never filmed.

* Kiefer Sutherland was only meant to wear black gloves when riding the motorbike. However, while messing around on the bike behind-the-scenes he fell off, breaking his wrist, which forced him to wear the gloves through the whole movie to cover his cast.

"The Lost Boys" performed well at the U.S. box office, grossing over $32 million - a strong performance for an R-rated , especially at that time.

As was the case for many of WB's films at the time, was given a copy of the script and asked to write a short novel to accompany the film's release. It was released in paperback by Berkley Publishing and is 220 pages long. It includes several scenes later dropped from the film such as Michael working as a trash man for money to buy his leather jacket. It expands the roles of the opposing gang, the Surf Nazis, who were seen as nameless victims of the vampires in the film. It includes several tidbits of vampire lore, such as not being able to cross running water and salt sticking to their forms. It has become something of a collector's item among fans with prices ranging from $20 for a well-read and somewhat battered copy to well over a $150 for copies in good condition (see external links).

'David' (Kiefer Sutherland) is impaled on a pair of antlers but doesn't disintegrate like the other vampires. Despite what Max later says, he is not really supposed to be dead. This was intended to be picked up in a sequel, "The Lost Girls", which was scripted but never made. In "Lost Boys: The Tribe" this is explained away as a vampire being able to be killed by anything through the heart, not just a wooden stake. David does not appear in "Lost Boys: The Tribe", but he does make a reappearance in the comic book series, "", which serves as a prequel to "Lost Boys: The Tribe".

Scripts for this and other sequels have been circulating since the late 1980s, and the original film's director, Joel Schumacher, made several attempts at one during the 1990s.

Finally, over 20 years after the release of the original film, "", was greenlighted. Corey Feldman reprises his role as Edgar Frog, with cameos by Jamison Newlander and Corey Haim as Alan Frog and Sam Emerson, respectively.

The sequel started shooting in Vancouver in June, 2007. Earlier that year Warner Bros. revealed it would produce a number of straight-to-video sequels for its existing library of franchise-friendly films, including the "Lost Boys" sequel. [ [http://www.moviehole.net/news/20070509_dusk_till_dawn_helmer_does_los.html Moviehole.net - Dusk Till Dawn helmer does Lost Boys 2] ]

Soundtrack of The Lost Boys (1987)
wrote the film score to be an eerie blend of orchestra and organ arrangement while the music soundtrack contains a number of notable songs and several covers, including "Good Times", a duet between and former lead singer which reached number 1 on the Australian charts in early 1987. This cover version of a 1960s Australian hit by was originally recorded to promote the tour of Australia in early 1987, headlined by INXS and Barnes.

's cover of The Call's "I Still Believe" was featured in the film as well as on the soundtrack. Tim Capello makes a small cameo appearance in the movie playing the song at the Santa Carla boardwalk, with his saxophone and trademark bodybuilder muscles on display.

The soundtrack also features a cover version of ' song "" by . The song as it featured in the movie is an alternate, shortened version with a slightly different music arrangement. This version has not been released as of yet.

The theme song, "", was originally recorded by (under his pseudonym of Gerard McMann) for the soundtrack, and later re-released on his self-titled album "" in 2000.In the sequel of the film the theme song "" was covered by a Seattle based rock band "".

ongs Not On Soundtrack

In a number of sitcoms, Haim and Feldman reference "The Lost Boys". In "National Lampoon's Last Resort" when Haim tries crossing himself to ward off an attacker. Feldman interrupts, "Hey, cut that out. You already did that in "The Lost Boys"."

Plus, the show "" had Haim and Feldman appear in different episodes as themselves, but vampires, the story being that during the making of "The Lost Boys", they actually became vampires.

In the movie "" Mr. Orange talks about how he was interupted in his efforts to watch the movie.

The song "Santa Carla Twilight" by psychobilly band is named after the town in "The Lost Boys" and makes references to vampirism.

The movie inspired the eponymous song "Lost Boys" by Finnish rock band . The movie-adaptating video for the song was directed by .

The 2004 video game makes reference to the film during a quest in the Hollywood hub. The quest involves the player convincing a food critic to give a certain cafe a bad review. If the player's character is a , they may use their power of Dementation to make him think he's eating maggots. The line is identical to 's character's spoken dialogue in the film with the phrase "Not like this is from a movie or anything..." added at the end.