Obersturmbannführer
The title of this article contains the character ü. Where it is unavailable or not desired, the name may be represented as Obersturmbannfuehrer. 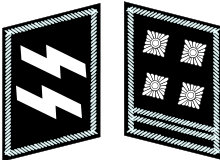 Obersturmbannführer was a paramilitary Nazi Party rank used by both the SA and the SS. It was created in May 1933 to fill the need for an additional field grade officer rank above Sturmbannführer as the SA expanded. It became an SS rank at the same time. Translated as “Senior Assault (or Storm) Unit Leader”, Obersturmbannführer was junior to Standartenführer and was the equivalent to Oberstleutnant (Lieutenant Colonel) in the German Army.

Amongst the more notorious holders of the rank of Obersturmbannführer were Rudolf Höss, Adolf Eichmann, Herbert Kappler and Joachim Peiper. Höss was commandant of the infamous Auschwitz concentration camp, whilst Eichmann is generally regarded as a key architect of the Nazi's Endlösung (Final Solution) policy in which Auschwitz came to play so major a role. Herbert Kapplar was the Gestapo Chief of Rome who conducted the infamous Ardeatine massacre, with Joachim Peiper being the commander of the eponymous Kampfgruppe responsible for the Malmedy massacre during the December 1944 Battle of the Bulge.

Eichmann was promoted to Obersturmbannführer in 1940 and was listed as such in the minutes of the Wannsee Conference that began the Endlösung. During Eichmann's trial for war crimes in 1962, chief prosecutor Gideon Hausner drew attention to the significance and responsibility of Eichmann's Obersturmbannführer rank when, in response to Eichmann's claim that he was merely a clerk obeying orders, Hausner asked him, “Were you an Obersturmbannführer or an office girl?”

In Eichmann in Jerusalem, however, Hannah Arendt disputes the notion that Obersturmbannführer was a rank of significance, pointing out that Eichmann spent the war "dreaming" about promotion to Standartenführer. Arendt also points out that "...people like Eichmann, who had risen from the ranks, were never permitted to advance beyond a lieutenant colonel [i.e., the rank of Obersturmbannführer] except at the front." She also noted that Eichmann was the lowest-ranking officer present at the Wannsee Conference, and his primary responsibilities were to prepare the minutes and send the invitations.[1]

The insignia for Obersturmbannführer was four silver pips and a stripe, centered on the left collar of an SS/SA uniform. The rank also displayed the shoulder boards of a Wehrmacht Oberstleutnant and was the highest SS/SA rank to display unit insignia on the opposite collar.

The Wiktionary definition of Obersturmbannführer