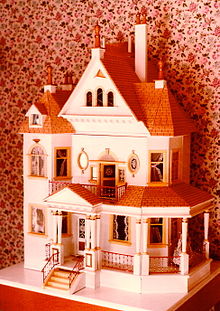 Exterior of a hand-built American dollhouse

A dollhouse is a toy home, made in miniature. For the last century, dollhouses have primarily been the domain of children but their collection and crafting is also a hobby for many adults. The term dollhouse is common in the United States and Canada. In UK usage, dolls' house or dollshouse is common.

Today's dollhouses trace their history back about four hundred years to the baby house display cases of Europe, which showed idealized interiors. Smaller doll houses with more realistic exteriors appeared in Europe in the 18th century. Early dollhouses were all handmade, but following the Industrial Revolution and World War II, they were increasingly mass produced and became more standardized and affordable.

Contemporary children's play dollhouses are commonly in 1:18 (or 2/3") scale, while 1:12 (or 1") scale is common for dollhouses made for adult collectors.

Miniature homes, furnished with domestic articles and resident inhabitants, both people and animals, have been made for thousands of years. The earliest known examples were found in the Egyptian tombs of the Old Kingdom, created nearly five thousand years ago. These wooden models of servants, furnishings, boats, livestock and pets placed in the Pyramids almost certainly were made for religious purposes.

The earliest known European dollhouses were the baby houses from the 16th century, which were cabinet display cases made up of rooms. They showed idealized interiors complete with extremely detailed furnishings and accessories. The cabinets were built with architectural details and filled with miniature household items and were solely the playthings of adults. They were off-limits to children, not because of safety concerns for the child but for the dollhouse. Such cabinet houses [1] were trophy collections owned by the few matrons living in the cities of Holland, England and Germany who were wealthy enough to afford them, and, fully furnished, were worth the price of a modest full-size house's construction. 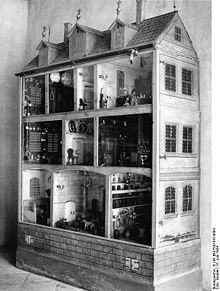 Smaller doll houses such as the Tate house, with more realistic exteriors, appeared in Europe in the 18th century.[2]

The early European dollhouses were each unique, constructed on a custom basis by individual craftsmen. With the advent of the Industrial Revolution, factories began mass producing toys, including dollhouses and miniatures suitable for furnishing them. German companies noted for their dollhouses included Christian Hacker, Moritz Gottschalk, Elastolin, and Moritz Reichel. The list of important English companies includes Siber & Fleming, Evans & Cartwright, and Lines Brothers (which became Tri-ang). By the end of the 19th century American dollhouses were being made in the United States by The Bliss Manufacturing Company.

Germany was the producer of the most prized dollhouses and doll house miniatures up until World War I. Notable German miniature companies included Märklin, Rock and Garner and others. Their products were not only avidly collected in Central Europe, but regularly exported to Britain and North America. Germany's involvement in WWI seriously impeded both production and export. New manufacturers in other countries arose. 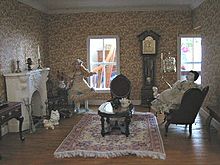 Living room of a Dollhouse in Maine, United States.

The TynieToy Company of Providence, Rhode Island, made authentic replicas of American antique houses and furniture in a uniform scale beginning in about 1917.[3] Other American companies of the early 20th century were Roger Williams Toys, Tootsietoy, Schoenhut, and the Wisconsin Toy Co. Dollhouse dolls and miniatures were also produced in Japan, mostly by copying original German designs.

After World War II, dollshouses became mass produced in factories on a much larger scale with less detailed craftsmanship than ever before. By the 1950s, the typical dollhouse sold commercially was made of painted sheet metal filled with plastic furniture. Such houses cost little enough that the great majority of girls from the developed western countries that were not struggling with rebuilding after World War II could own one. 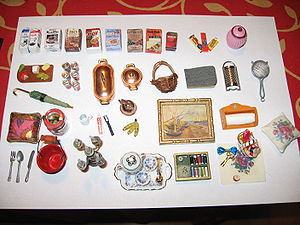 Dollhouse items in the scale 1:12.

Dollhouses are available in different forms. From ready-made and decorated houses to kits to custom built houses made to the customer's design. Some design and build their own dollhouse. Simpler designs might consist of boxes stacked together and used as rooms.

Miniature objects used for decoration inside dollhouses include furniture, interior decorations, dolls and items like books and clocks. Some of these are available ready-made, but may also be homemade.

There are dozens of miniature trade shows held throughout the year by various miniature organizations, where artisans and dealers display and sell miniatures. Often, how-to seminars and workshops are part of the show features. Miniature stores also hold classes. There are Internet forums, blogs and using other online social media concentrated in dollhouses and miniatures. Enthusiasts also share images online.

In the United States, most houses have an open back and a fancy front facade, while British houses are more likely to have a hinged front that opens to reveal the rooms.

Contemporary kit and fully built houses are typically made of plywood or medium-density fiberboard. Tab-and-slot kits use a thinner plywood and are held together by a system of tabs and slots (plus glue). These houses are usually light-weight and lower cost but often require siding, shingles, or other exterior treatments to look realistic. Kits made from heavier plywood or MDF are held together with nails and glue. 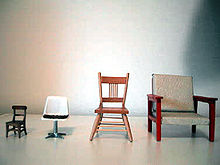 The baby houses of the seventeenth and 18th centuries, and the toy dollhouses of the nineteenth and early 20th century rarely had uniform scales, even for the features or contents of any one individual house. Although a number of manufacturers made lines of miniature toy furniture in the 19th century, these products were not to a strict scale.

Children's play dollhouses from most of the 20th and 21st centuries are 1:18 or two third inch scale (where 1 foot is represented by 2/3 of an inch). Common brands include Lundby (Sweden), Renwal, Plasco, Marx, Petite Princess, and T. Cohn (all American) and Caroline's Home, Barton, Dol-Toi and Triang (English). A few brands use 1:16 or 3/4"-scale.

The most common standard for adult collectors is 1:12 scale, also called 1" or one inch scale (where 1 foot is represented by 1 inch.) Among adult collectors there are also smaller scales which are much more common in the United States than in Britain. 1:24 or half inch scale (1 foot is 1/2") was popular in Marx dollhouses in the 1950s but only became widely available in collectible houses after 2002, about the same time that even smaller scales became more popular, like 1:48 or quarter inch scale (1 foot is 1/4") and 1:144 or "dollhouse for a dollhouse" scale.

In Germany during the middle part of the 20th century 1:10 scale became popular based on the metric system. Dollhouses coming out of Germany today remain closer in scale to 1:10 than 1:12.

The largest common size for dollhouses is Playscale or 1:6 which is proportionate for Barbie, Ken, Blythe and other dolls 11-12 inches tall.