Export-Import Bank of the United States

Export-Import Bank of the United States 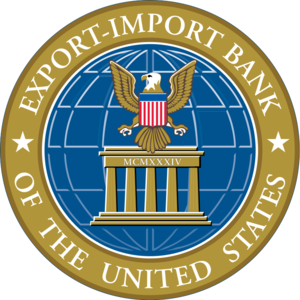 The Export-Import Bank of the United States (Ex-Im Bank) is the official of the . It was established in 1934 by an executive order, and made an independent agency in the Executive branch by Congress in 1945, for the purposes of financing and insuring foreign purchases of United States goods for customers unable or unwilling to accept . The mission of the Bank is to create and sustain U.S. jobs by financing sales of U.S. exports to international buyers. The Bank is chartered as a government corporation by the Congress of the United States; it was last chartered for a five year term in 2006. [ [http://www.congress.gov/cgi-bin/bdquery/z?d109:S.3938: Senate Bill 3938] , which became Public Law 109-438 on , .] Its Charter spells out the Bank's authorities and limitations. Among them is the principle that Ex-Im Bank does not compete with private sector lenders, but rather provides financing for transactions that would otherwise not take place because commercial lenders are either unable or unwilling to accept the political or commercial risks inherent in the deal. Its current chairman is Fact|date=November 2007.

The U.S. Export-Import Bank (Ex-Im Bank) is the principal government agency responsible for aiding the export of American goods and services, and thereby creating and sustaining U.S. jobs, through a variety of loan, guarantee, and insurance programs. Generally, its programs are available to any American export firm regardless of size. Similar banks, or export credit agencies (ECAs), are operated by a number of foreign countriesFact|date=November 2007. Many ECAs agree to conduct their activities by following a set of common rules and principles through their membership in the (OECD); these ECAs are generally in the so-called "developed" countries. The goal is to permit exporters in various countries to compete on the basis of the quality of their goods and services, not on preferential financing terms. Other ECAs, such as the [http://english.eximbank.gov.cn/ China Exim Bank] (in the ) do not abide by the OECD rulesFact|date=November 2007.

The bank was originally organized as a banking corporation by [http://www.presidency.ucsb.edu/ws/?pid=14772 Executive Order 6581] from on , , under the name Export-Import Bank of Washington. The stated goal was "to aid in financing and to facilitate exports and imports and the exchange of commodities between the United States and other Nations or the agencies or nationals thereof", with the immediate goal of making loans to the . The Bank's first transaction was a $3.8 million loan to in 1935 for the purchase of U.S. silver ingots. [cite web|url=http://www.exim.gov/news/reporter.cfm|title=A Reporter's Guide To Ex-Im Bank|accessdate=2007-11-15] Congress continued the bank as a government agency, using a series of laws between 1935 and 1943 to place it under various government departments, before making it an independent agency on , with the Export-Import Bank Act of 1945. On , , further legislation changed the name to "Export-Import Bank of the United States".

Roosevelt created a Second Export-Import Bank of Washington with Executive Order 6638 on , , with the specific aim to aid trade with Cuba, and it was dissolved in 1936 with its obligations transferred to the first bank.

The Export-Import Bank of the United States focuses much of its energy and resources to providing support to U.S. small businesses for export of U.S. made products. There are no transactions, in terms of dollars, that are too small for the Ex-Im Bank to consider. Programs aimed at this sector include Export Credit Insurance, and Working Capital Guarantee programs. From October 2005 through September 2006 the Ex-Im Bank authorized $3.2 billion in financing directly to U.S. small businessesFact|date=November 2007.

Export Credit Insurance from Export-Import Bank of the United States provides insurance policies to companies and banks to mitigate risks of non-collection from foreign buyers and borrowers. Risks covered include default due to commercial reasons, such as buyer insolvency and cash-flow problems, as well as political risks such as war, civil unrest and currency flow restrictionsFact|date=November 2007.

Export Credit Insurance policies can be issued to companies directly exporting, or to banks lending to foreign buyers. Export-Import Bank of the United States has a special insurance program for small businesses, with no premium minimum, and a pay-as-you-go premium structure. This is often the most affordable trade credit insurance available for new and small exportersFact|date=November 2007.

The Working Capital Guarantee program provides loan guarantees to banks willing to lend to exporting companies. The loan guarantee is secured against foreign accounts receivable, and against work in process and finished goods inventory destined for exportFact|date=November 2007.

The Ex-Im Bank provides two types of loans: direct loans to foreign buyers of American exports and intermediary loans to responsible parties, such as foreign government lending agencies which relend to foreign buyers of capital goods and related services (for example, a maintenance contract for a jet passenger plane). Both programs cover up to 85 percent of the value of the exported goods and services, with repayment terms of one year or moreFact|date=November 2007.

The Bank has come under criticism for allegedly favoring special interests ahead of that of the U.S. taxpayer. These interests include that of heavily subsidized corporations such as or as well as those of well-connected foreign governments and nationals (such as a 1996 $120 million low-interest loan to the China National Nuclear Power Corporation (CNNP). [cite web|url=http://www.nationalreview.com/comment/comment-carney053102.asp|last=Carney|first=Timothy|title=Bank Scam|date=, |publisher=National Review|accessdate=2007-12-19]

However, the current congressional mandate for the Export-Import Bank of the United States is to focus on small business supportFact|date=November 2007.

In 2007, WFAA-TV in Dallas revealed that the Ex-Im Bank had given at least $243 million in fraudulent loans to companies doing business with Mexico, including giving loans to companies with no verifiable address and individuals who were known associates of the Sinaloa and Juarez drug trafficking cartels. [cite web|title=Drugs tied to $243 million in bogus loans|url=http://www.wfaa.com/sharedcontent/dws/wfaa/localnews/news8/stories/wfaa071227_mo_bankdrugs.5adabe14.html|publisher=WFAA-TV|date=, 2007|first=Byron|last=Harris|accessdate=2007-12-28]