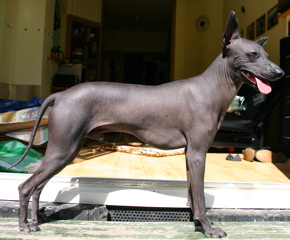 The Peruvian Hairless Dog is a breed of with its origins in Peruvian . It is one of several breeds of . This dog is not to be confused with an almost precise replica called the Xoloitzcuintli.

According to the FCI breed standard, the most important aspect of its appearance is its hairlessness. The dog may have short hair on top of its head, on its feet, and on the tip of its tail. In Peru, breeders tend to prefer completely hairless dogs. The full-coated variety is disqualified from conformation showing.The color of skin can be chocolate-brown, elephant grey, copper, or mottled. They can be totally one color or one color with tongue pink spots. is not allowed. The eye color is linked to the skin color. It's always brown, but dogs with light colors can have clearer eyes than darker-skinned dogs.There are 3 breeds of Peruvian Hairless Dogs :
*Small (or pequeño), 25 to 40 cm (10 to 16 inches)
*Medium (or "medio"), 40 to 50 cm (16 to 20 inches)
*Large (or "grande"), 50 to 65 cm (20 to 26 inches)The smallest weighs from 4 kg (9 lb) and the largest up to 25 kg (55 lb).

The dogs should be slim and elegant, with the impression of force and harmony, without being coarse.

The ears should be candle-flame shaped and erect with the possibility to lay flat.

Proportions of height (at ) to length (withers to base of tail) are 1:1.

Noble and affectionate at home with those close to him. At the same time lively and very alert. He is wary, almost suspicious of strangers.They are friendly with other dogs but can be protective as well. These dogs do not like to be alone, but when trained, can do well. It is a dog that can be indoors or outdoors. Attention and care must be used when outdoors due to intolerances to temperatures. They are agile and fast.Despite its assets, the primitive nature of the dog doesn't make it a good dog for beginners. It needs an owner that understands .

The lack of hair leads to a reputation for being clean, for being easy to wash with a sponge, and for a natural lack of s or other s. Despite this, the dog needs as much care as other dogs, but in another way. The skin should be taken care of frequently. Almost all of this breed tend to have acne or at least s. The skin often becomes too dry and can be treated with some kind of moisturing cream.

Protection against sunlight may be necessary, depending on the season and the color of the dog's skin. The dark-colored dogs get used to direct sunlight and need to be looked after only in spring when sunlight gets stronger. The light-colored dogs (copper) and spotted ones have to be protected always, in summer. They tend to quickly .

Protection against cold may be necessary when it gets colder. Sensitivity to cold may vary from dog to dog. Smaller dogs seem to be more sensitive to the cold than their larger counterparts.

The ears need special attention. The rims of the ears can dry out and chap easily. One good remedy is on the tips.

The genes that cause hairlessness also result in the breed often having fewer teeth than other breeds, mostly lacking molars and premolars.

One theory is that hairlessness is dominant-lethal, which means that homozygotic hairlessness doesn't exist. This results in a birthrate of 2:1, hairless : coated.However, some breeders don't show this result, having a birthrate between 2:1 and 8:1.According to Hans Räber "Enzyklopädie der Rassehunde" T.I [Hans Räber "Enzyklopädie der Rassehunde" T.I] 25% of the population is born coated.

AKC-type breed standards are not compatible with the genetics of hairlessness in dogs, but FCI rules are. Some breeders think that interbreeding with coated (Peruvian) dogs is required to maintain functional teeth and nervous system health in subsequent generations. They say that breeding of hairless with hairless (and common but unacknowledged ing of hairy pups from litters to maintain a "pure" image) leads to short-lived dogs with serious health problems.However, other breeders think the opposite and are doing well, too. Breeding hairless to hairless increases the chance of congenital defects in litters.Fact|date=July 2008

Like all breeds there are some health problems. There include IBD, seizures, stroke, and skin lesions. They are very sensitive to toxins and care should be taken in use of insecticides. Insecticides are absorbed through the skin and body fat keeps these toxins from entering the liver too quickly. Since these dogs have very low body fat toxins are absorbed too quickly and cause severe damage to the nervous system and GI tract.Fact|date=July 2008

This is an ancient breed. Although it is often perceived to be an n dog because it is known to have been kept during the Inca Empire, they were also kept as pets in pre-Inca cultures from the Peruvian coastal zone. Ceramic hairless dogs from the , , and culture are well known.Depictions of Peruvian hairless dogs appear around 750 A.D. on ceramic vessels and continue in later Andean ceramic traditions. [Berrin, Katherine & . The Spirit of Ancient Peru:Treasures from the Museo Arqueológico Rafael Larco Herrera. New York:Thames and Hudson, 1997. ] The main area of the Inca Empire(the mountains) is too cold for the natural existence of the dogs.The Spanish conquest of Peru nearly caused the extinction of the breed. The dogs survived in rural areas, where the people believed that they held a mystical value.In recent years, the (FCI) accepted the breed and adopted an official . Before that time, in the United States, some enthusiasts created another type of Peruvian hairless dog, the . The Peruvian Inca Orchid is recognized by the AKC. The club UKC also recognized the breed in recent years.

It is a persistent myth that the body temperature of hairless dogs is higher than other dogs; they may feel warmer due to the lack of hair. Letting the dog "hug" you is supposed to help with stomach pain and other disorders, according to Peruvian folklore.Other myths are the dog is a vegetarian or that it cannot bark. It is very likely that some of these myths have helped the breed to survive in Peru.