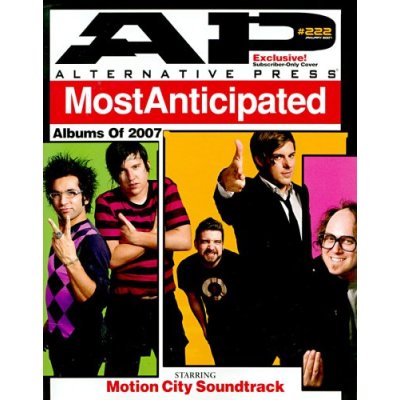 "Alternative Press" (or commonly referred to on the website and in the magazine as AP) is an American music magazine based in which primarily focuses on , , , , hardcore and and their attendant subgenres, providing readers with band interviews and photos, information on upcoming releases, and music charts. It was founded in 1985 by Mike Shea, who is the current president.

The first issue of AP was just a photocopied , distributed at concerts in Cleveland beginning in June 1985 by AP's founder, Mike Shea, who disliked the music then broadcast on radio stations and believed that bands playing should be given more media coverage "all in the same spot", he said.

Financial problems plagued AP in its early years. Of the fledgling magazine's struggles in 1986, Shea said: "After the last few punk concerts we promoted that year failed to make any money to help finance the magazine, I had to start begging my mom for money to keep AP going: $1,500 here, $2,500 there. My mom was super-supportive of the whole endeavor, and she seemed to enjoy having a bunch of punkers over at all hours of the night putting together issues on her dining-room table and getting spray mount all over her nice tablecloths and on the carpeting, which resulted in our socks getting pulled off as we walked over it." However, by the end of 1986, publication had ceased due to its financial problems, not resuming until the spring of 1988.

With the growth of in the early 1990s, circulation began to increase. AP's covers included bands such as and , prior to each band's mainstream success. The magazine's first cover story on in 1990 was said by Shea to be AP's "biggest-selling issue ever." Shea recalled getting a subscription order from "Spin" magazine publisher , who wrote a note saying, “I enjoy your magazine tremendously, and at the risk of offending your alternative sensibilities, here’s a copy of the next issue, in which I wrote the cover story about ."

In 1991, Shea dissolved his partnership with Bobby Crist, in a dispute over Alternative Press' advertising and subscription sales agency at the time, Spectrum Media Group.

By 1994, the magazine was doing cover stories on , and Love And Rockets. Norman Wonderly, now the publisher, was credited by Shea as having "made most of these happen and the more Norman got what he wanted, the more artists wanted their cover shoots to look the way Norman wanted, and so on. It wasn’t always easy; there were some nasty phone calls exchanged between everyone, and there was always some publicist who wanted to give us one half-hour of shoot time so the artist could go shopping or some stupid thing. Did we sometimes protest too much? Maybe, but we were up against a lot; we were underfinanced and still underappreciated in some corners of the music business, so we had to fight scrappily and mean when it was called for. Nobody takes you seriously unless you take yourself seriously, and that’s what Norman brings to his position to this day."

Over the years, Alternative Press has supported a number of unknown new groups who have gone on to mainstream success, such as , , , , , , , , , , and others. The magazine was the first national music publication to put Nirvana, , and other alternative-rock icons on its covers.

Critics such as David Thorpe, a music reviewer at the website, have accused AP of pandering to the " crowd", while some have said that it has become more like its main competitors, "" and "Spin" magazines. However, others retort that those magazines are actually adapting more to AP's style, citing as evidence recent cover stories by those publications on Fall Out Boy, Panic! At The Disco and My Chemical Romance &ndash; all three bands which AP discovered and first broke on a national level.

Its annual feature issues include "Most Anticipated Albums of the Year", which provides information about bands and their upcoming albums, and "100 Bands You Need To Know", informing readers of new bands and artists expected to become popular.

The magazine has also put its name on a radio show aired on , a podcast featuring in-depth discussions on various topics with people such as 's and , and a compilation CD. AP is a major sponsor of , the tour, and has started its own, aptly named "The AP Tour."