RHS Britain in Bloom, supported by Anglian Home Improvements, is the largest horticultural campaign in the United Kingdom. It was first held in 1963, initiated by the British Tourist Board based on the example set by Fleurissement de France.[1] It has been organised by the Royal Horticultural Society (RHS) since 2002. In January 2011 Anglian Home Improvements announced their three year sponsorship of the campaign.

The competition is entered by the communities of towns, villages and cities. Different categories exist for various sizes of settlements. Groups are assessed for their achievements in three core pillars: Horticultural Excellence; Environmental Responsibility; and Community Participation.

Over 1,000 communities around the UK enter each year, participating in their local region's "in Bloom" campaign. From these regional competitions, roughly 70 communities are selected to enter the national Finals of RHS Britain in Bloom.

It is a popular campaign, estimated to involve more than 200,000 volunteers in cleaning up and greening up their local area.[2]

Since 2002, the awards have been based on the Royal Horticultural Society's medal standards of Gold, Silver Gilt, Silver and Bronze;[3] the winner is the settlement judged to have most successfully met the rigorous judging criteria. Judging at the regional stage takes place around June/ July; judging for the national stage takes place in August. The results for the UK Finals are announced in September/ October. The competition covers the UK, the Channel Islands and the Isle of Man.

Floral displays play an important part in the contest, but the "Bloom" title is now, perhaps, misleading: in recent years the competition has increasingly assessed how all sectors of the local community are managing their local environment.

In 2006, the RHS introduced the Neighbourhood Awards (now the It's Your Neighbourhood campaign), a grassroots sister campaign to Bloom, supporting smaller, volunteer-led community groups focused on improving their immediate environment.

The history of the 'Bloom', as it is colloquially referred to,[4] began in 1963 when Roy Hay MBE, a horticultural journalist, went on holiday to France during the Fleurissement de France and was enthralled by seeing the country "filled to overflowing with flowers, shrubs and trees all in full bloom". His enquiries revealed that President de Gaulle had given orders to brighten up the country and the French Tourist Authority had set up the Fleurissement de France in 1959 (now called Concours des villes et villages fleuris). Hay was so impressed that he approached the British Tourist Authority ("BTA"), and he and Len Lickorish, then Director General of the BTA, set up a committee to run a British version, "Britain in Bloom". It was piloted by the British Tourist Authority in 1963 (Lewisham being part of that pilot[5]), and went national in 1964.

Nevertheless, regional committees were quickly formed, and in 1964 Bath became the first national winner. From 1964 to 1969 inclusive there was an overall national winner. From 1970, however, the competition was divided up into a range of categories, because of the difficulty of comparing settlements of different sizes fairly.[4]

The British Tourist Authority managed the competition until 1983 when the Government Department sponsoring the BTA felt that it should relinquish the responsibility. The Tidy Britain Group (the group responsible for the Keep Britain Tidy campaign, now known as EnCams) took over; it already had a long association with the competition. To mark the changeover, 1983 was celebrated as "Beautiful Britain in Bloom Year".[4] Sir Lawrie Barratt of Barratt Developments expressed his support to the Tidy Britain Group for the competition and provided sponsorship until 1989.

More categories and awards were added, in part reflecting a greater range of settlements, but also to recognise other elements of horticulture, including landscaping, and also to recognise the strenuous efforts to beautify the urban areas of the larger cities. McDonalds began sponsoring the competition from 1990, which led to focus on littering behaviour and the implementation of a Children's Painting Competition Calendar.[4] In 2001, the event was organised jointly by EnCams and the Royal Horticultural Society, and from November 2001 the RHS took full control as the organising body of Britain in Bloom.[6] 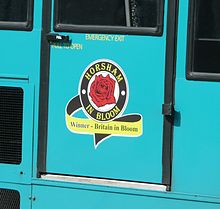 An emblem on the side of an Arriva bus, celebrating Horsham's 2007 victory in the Small City/Large Town category

The competition currently has twelve entry categories, most of which are determined by population size. Within each category, similarly sized communities compete across a spectrum of horticultural endeavour, community participation and environmental responsibility, which includes dealing with issues of litter, graffiti and vandalism.[6]

From the winners and finalists of RHS Britain in Bloom, entries are picked to represent Britain in international competitions such as the Entente Florale.[14]

There are 18 Regions/ Nations "in Bloom", each of which coordinate regional campaigns in their area. The regions of the UK and Crown dependencies used in the competition are (with reference to ceremonial counties and government office regions)

RHS It's Your Neighbourhood

RHS It's Your Neighbourhood is part of the wider RHS Britain in Bloom initiative, supporting smaller, volunteer-led groups in improving their immediate environment. This could be their local community park or garden, the estate where they live, or the residential alley they share.

The campaign was launched by the RHS in 2006. There are currently more than 1,100 registered It's Your Neighbourhood groups (2011).

The initiative works around the same three pillars of assessment as RHS Britain in Bloom: Community Participation, Horticultural Achievement and Environmental Responsibility; however, it is not a competitive campaign. Participating groups receive an annual visit from an It's Your Neighbourhood assessor, who can provide valuable feedback, and each group receives a certificate of achievement from the RHS.

The It's Your Neighbourhood campaign is free to enter and open to groups of all sizes, as long as they are focused on improving their local environment and are:

For example, they could be: 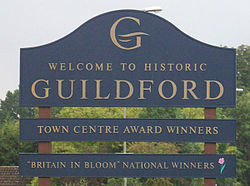 Winning a category within Britain in Bloom at a national or even regional level has proved to be a source of considerable civic pride for the towns, cities and villages involved. Many of the authorities of the winning locations do advertise their achievements on signs within, or more predominantly on the outskirts of their settlement. One journalist stated that "Since Britain In Bloom began in 1963 … nothing has pleased town councillors more than to hammer up a sign at the outskirts of their kingdom trumpeting superiority to incoming visitors… Few events provide a sterner test of civic pride."[8] Examples include Garstang where the sign that leads to the high street at the heart of the town says, above the name "Garstang", Britain In Bloom Small Town – Gold Award Winners 2002, 2005, and "Invitation Finalists to Champion of Champions 2006",[8] or Guildford, which advertises its past triumph in the Town category on its welcome signs.