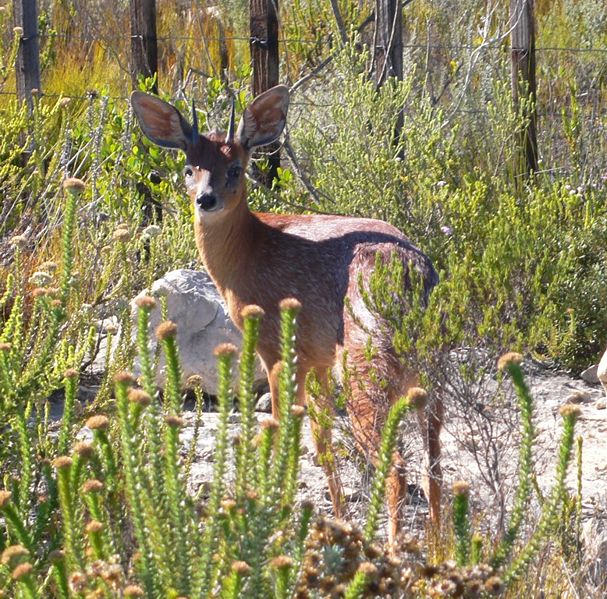 Cape or Southern Grysbok ("Raphicerus melanotis") is a small that is endemic to the region of between Albany and the .

It has a rough, reddish sandy coat flecked in white. The head, neck and legs are less flecked and somewhat yellowish, while the inside of the ears, eye-rings, mouth area, throat and underside are white. There is a black "bridge" to the nose and a dark scent gland in front of the eye. It stands only 21" (45–55 cm) at the shoulder and weighs slightly more than 20 pounds (8–12 kg). The tail of the Cape Grysbok is almost invisible (4–8 cm). Males have short, sharp, straight horns about 8 cm long, which are smooth. The Cape Grysbok can fluff out the fur at its rear end to make itself look bigger. It has a short and almost invisible tail.

The Cape Grysbok's native habitat is the " biome" (Cape Floristic Region), and it inhabits thick shrubland. It can sometimes be found browsing orchards and vineyards. It may also be found in reed beds and along the riverbed of the southern .

The species is probably territorial—sightings are mostly of individual animals.

Lambs are born in the southern after a of about 6 months. They stay hidden and grow fast.

Cape Grysbok is a browser. It can apparently go without drinking water for long periods, gaining most of its requirements from its food. It is primarily nocturnal, though it may be seen during early morning and late evening during the southern .

The similar ("Raphicerus sharpei") can be found in south-eastern Africa. The primary physical difference between the two grysboks is that Sharpe's has a pair of "false hooves" above the fetlocks.

* [http://www.wild-about-you.com/GameCapeGrysbok.htm Photo of a Cape Grysbok]