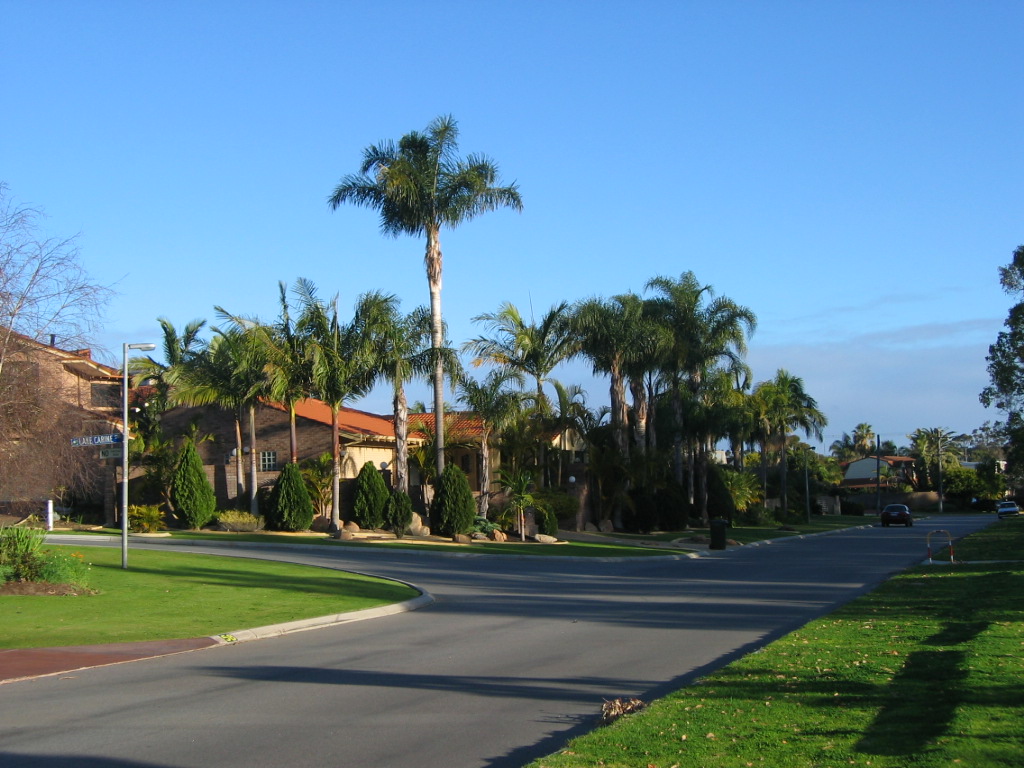 Carine is a suburb of Perth, the capital city of , and is located convert|14|km|mi|0 north of Perth's (CBD) between and . Its Local Government Area is the .

The name "Carine" was derived from the two swamps in the area, which were recorded by R. Quinn in a survey in 1865 as "Big Carine Swamp" and "Small Carine Swamp". Carine originally formed part of the Hamersley Estate, which also included the suburbs now known as North Beach, Waterman and Hamersley. [LandInfo WA|m|C|2007-05-15]

These areas were owned by the Hamersley family, who arrived from Europe to settle in the Swan River Colony in 1837 and built a summer home in what is now North Beach. The majority of land at Carine remained largely undeveloped until the 1960s, with a few market gardens and farms established in the low-lying portions around the swamps, the remainder being timber reserves and a small piggery and horse stable near Little Carine Swamp, and the Beetles Dairy in Okely Road which operated until 1915. [cite web|url=http://trails.heritage.wa.gov.au/ht_pdf/StarSwamp.pdf|title=Heritage Trail - Star Swamp|accessdate=2006-09-15|author=Heritage Council of WA|year=1999|month=June]

In the early 1970s, the part of the suburb south of what is now Reid Highway was built, and in 1973, Carine High School opened. For several years, the high school and the Carine Gardens Caravan Park and surrounding market gardens on Balcatta Road were the only facilities in the suburb. From 1975 onwards, the residential suburb was built progressively, with the last two stages being completed in 1987, west of Osmaston Road and the Lake Carine Gardens estate (built on a site originally reserved for a school to serve eastern Carine).

The majority of buildings were single detached houses but, with the growth in popularity of infill development, duplexes have become more common. [cite web|url=http://www.stirling.wa.gov.au/home/council/Suburbs/Carine.htm|title=Suburbs - Carine|accessdate=2006-09-15|author=City of Stirling]

In 2000, the final stage of was completed despite considerable local opposition. ["Stirling Times" (Community Newspapers), various editions, 2000-01, accessed at Karrinyup Library, July 2006.] This effectively separated the southern 300m of the suburb (the oldest section) and the caravan park from the rest of Carine.

Carine is bounded by Beach Road to the north, to the east, North Beach Road to the south and to the west. Carine Regional Open Space sits between Duffy/Monyash Roads and Okely Road, and represents about one-third of the suburb. Reid Highway runs through the southern part of the suburb, and is the suburb's outlet to the Mitchell Freeway and the city.

At the ABS 2006 census, Carine had a mostly middle-income white population of 6,596 people living in 2,314 dwellings, nearly all of which were detached houses on single lots. The ABS reported that nearly half of Carine's workforce were managers or professionals, while the most common occupations were in retail, property and business services, education, and health and community services.

Carine is a residential suburb, relying on the Carine Glades shopping centre on its northern boundary for basic commercial services, and nearby Karrinyup Shopping Centre and Centro Warwick for other services. The suburb is served by a primary school, high school (8-12) and a TAFE college.

Carine Regional Open Space is a wetland reserve centred on the two large swamps, and is home to many rare waterbirds, frogs, turtles and other wildlife. They are served by walking and bicycle tracks. The northern end of the open space contains sports facilities, ovals and a skateboard ramp.

Carine is served by the Warwick railway station at its northeastern corner, linking the area to the Perth CBD. The suburb is also served by bus routes 425 and 435 along Beach Road, Okely and Osmaston Roads and Everingham Street, the 424 along North Beach Road in Carine's south, and other routes along and Beach Road. [ [http://www.transperth.wa.gov.au Transperth website] , accessed 18 November 2006.]

Carine is a reasonably affluent suburb with many "" families and socially liberal voters. It consistently supports the Liberal Party at both federal and state elections.