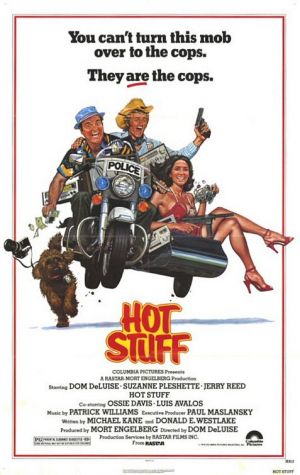 "Hot Stuff", written by and , was recorded in March of during the "Black and Blue" sessions, and is heavily influenced by the / sounds of the day, with laying down a heavy drum pattern accompanied by on , adding a funky bassline, and extensive use of the Phase 100 pedal by both Keith Richards and the by guest guitarist , formerly of . Mandel plays the lead guitar parts on the song and was one of the guitarists in consideration for replacing the departed 's slot as the Stones' lead guitarist, a position eventually filled by . plays piano on the recording.

The video , however, features Wood on guitar playing Mandel's part (similar to the videos for and , which were actually played by and respectively). The second and final single from "Black and Blue" (following the worldwide top 10 hit "") "Hot Stuff" was not as successful as its predecessor, reaching #49 in the . Despite the relative failure of the single, however, the band would continue to explore the disco/funk sounds heard on the recording with later albums and singles - their next single, the disco-infused "", would reach the top position in the US two years later.