What It Takes (song)

What It Takes (song)

Infobox Single
Name = What It Takes 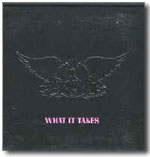 "What It Takes" is a song by American band . It was written by , Joe Perry, and . It was released in 1990 as the third single from Aerosmith's critically and commercially successful 1989 album "Pump". It is one of Aerosmith's classic ballads, and is regarded by both fans and critics alike as among their best. Fact|date=February 2007 In the video "", A&R man described the song as "a fuckin' masterpiece". It has also been described as "the best song ever with an accordion".Fact|date=October 2008

The album version of the song is followed by an untitled hidden track.

In concert, Steven Tyler often sings the first verse before the band goes into the chorus and remainder of the song.

There are two videos for the song. One features the band performing in a bar. The other is culled from scenes from "", a film which documented the recording process of the "Pump" album. The latter receives much greater airplay, and was also the version the band chose to include on their video collection "".