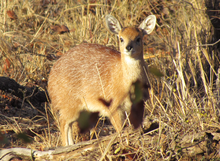 A Sharpe's Grysbok in the Kruger National Park

It is similar in size to the Gray Duiker, but has a stockier body and elongated fur over the hindquarters. It stands about 20" (45–60 cm) at the shoulders and weighs only 7–11.5 kg. Its coat is reddish-brown which is streaked with white; eye-rings, around mouth, throat and underside are off-white. The males have stubby horns, which are widely spaced. Sharpe's Grysbok has a short deep muzzle with large mouth and heavy molar (grinding) teeth. The short neck and face on a long-legged body result in a high-rump posture when browsing.

Although its territorial range is large, Sharpe's Grysbok is infrequently seen. Males and females seem to form brief associations, but the species is usually encountered singly. Territory is marked with dung middens. Their habitat is rocky hill country, but preferring fertile zones on the lower slopes. They are nocturnal browsers and spend the day in the protective cover of tall grass or shrubs. They are extremely timid and will run away at the first sign of anything unusual, although this flight is accompanied "short stamping hops"[2]; they move well away from where the disturbance occurred before stopping (unlike Steenbok, which stop and look back)[3]. Sharpe's Grysbok are reported to take refuge in Aardvark burrows, like Steenbok.

Sharpe's Grysbok browse on leaves, buds, herb and fruits—in the dry season, their food is typically tough (for which their teeth and jaws are adapted). Grazed grass makes up about 30% of their diet[2].

The closely related Cape (or Southern) Grysbok (R. melanotis) occurs in the western Cape region. Haltenorth and Diller[4] consider sharpei as a subspecies of melanotis.