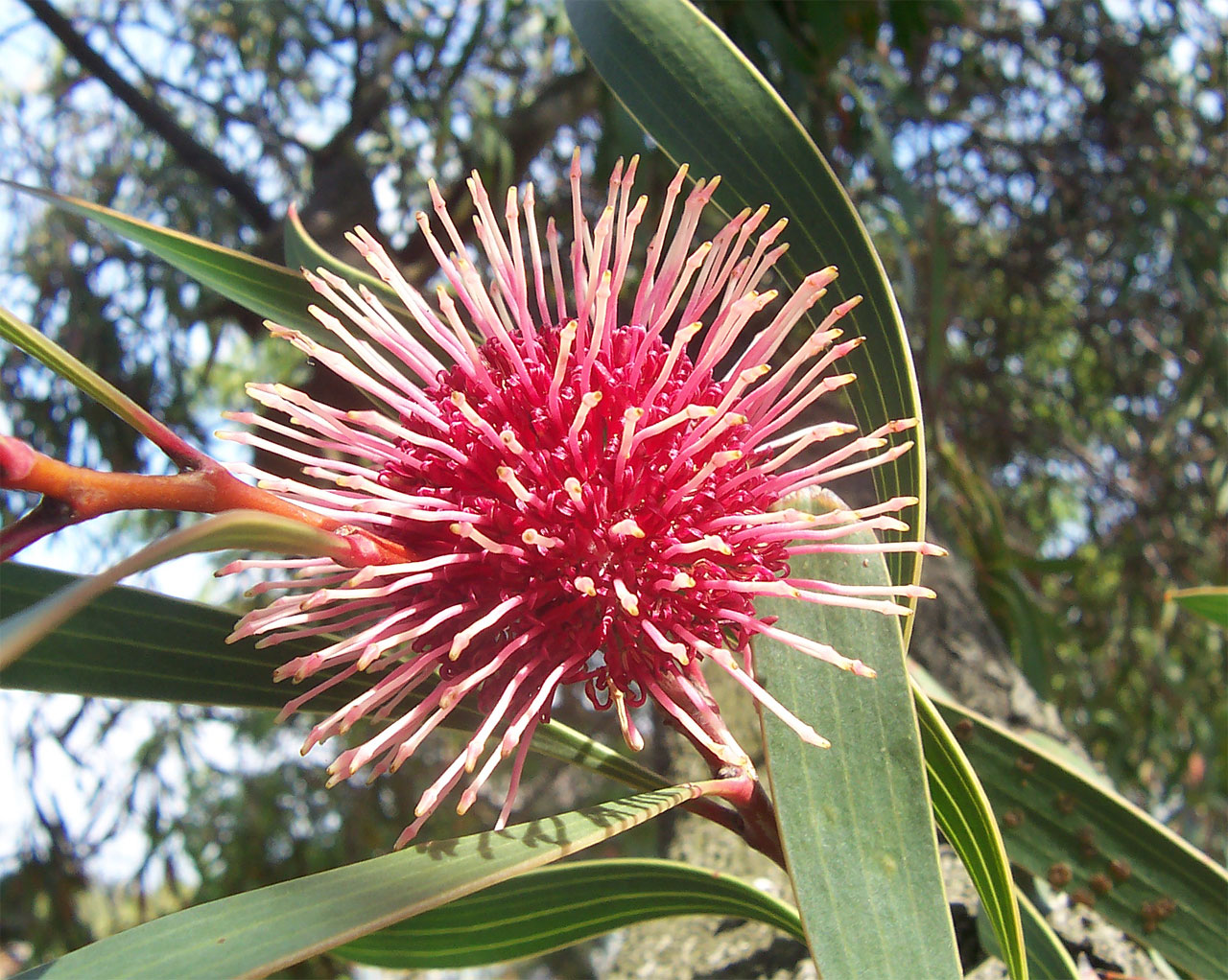 "Hakea laurina" is a plant of that is widely cultivated and admired.

The species is often referred to as Kodjet, Pincushion Hakea, and Emu Bush. [ FloraBase "and" Young] The specific epithet, derived from the Latin "laurus", is given for the resemblance to the leaves of laurel.

The habit of this plant is an upright shrub or tree, reaching a height between 2.5 and 6 metres. It does not possess a . The habitat is often sandplains, sometimes occurring on sandy-clay, most recorded specimens are in the southern districts of its botanical province.

s are initially pale or cream, perhaps hidden by the leaves in the early stages, and are contained by scale-like bracts before opening. These are deep pink to red on the globular centre, a clustered flowerhead at the leaf axils, pale emerge from these. This resembles a . Nectar and a slight fragrance is produced from the flowerheads. The flowering period occurs between April and August.
are simple and slightly blue green, they are flat, glabrous, have entire margins, and are obovate or lanceolate in outline, coming to a sharp point at the tip. The leaves vary in size on the plant, they may be 6-29mm wide and reach 180 mm in length.Foliage is dense and in alternate arrangement on the upright branchlets, in some forms this may be pendulous and reach the ground. Bark is grey and smooth. Fruit is retained on the plant, is ovoid, slightly beaked at the end, and a smooth surface on the .The species occurs in the sandplains of the coastal Southwest of Australia, the northern most range being and extending east to . [Young p.59]

The plant is used in cultivation in the , and as a hedging or street plant in America and . The plant is propagated from seeds. Adaptable to a number of soil types, the plant is also tolerant of frost. The uses of this species include ornament and shading in public streets, wildlife habitat, windbreaks, and control of soil erosion.

In the , "Hakea laurina" symbolises nobility and longevity.