"November Rain" is a song by American rock band Guns N' Roses, written by lead singer Axl Rose and released as a single in June 1992. It appears on the album Use Your Illusion I. The music video for this song was also released in 1992, and won an MTV Video Music Award for Best Cinematography. It features a sweeping orchestral backing and is one of Guns N' Roses' longest songs.

The song is composed in the key of C major aside from the coda, which is in C minor, but due to guitars, basses and piano being tuned a half step down, the song sounds like being in the keys of B major and B minor.

Its distinct symphonic overtone owes to a sweeping string arrangement, orchestrated by Rose.[1][2]:318 Most live performances during the Use Your Illusion tour lacked the orchestral backing of the song (the 1992 MTV Video Music Awards being the best-known exception).

It is the longest song to reach the top 10 of the Billboard Hot 100.[3] The song peaked at #3 on the chart, becoming the band's sixth and last Top 10 hit, and eighth Top 40 hit. On the radio, "November Rain" is sometimes played in a shortened version of approximately six minutes, but many classic rock stations continue to play the full version. At around seven minutes in, the song fades and then builds into a two-minute coda featuring lead guitar by lead guitarist Slash, accompanied by vocal chants. This song is listed at number six in the The 100 Greatest Guitar Solos list by Guitar World.[4]

According to Tracii Guns, former LA Guns guitarist and founding member, Rose had been working on the song since at least 1983. In an interview, he said the following about "November Rain":

In 1985, Waggle Records (Pty.) Ltd. released in Australia a two-LP set titled "November Rain"/ "In Concert and Beyond" of an unidentified concert featuring a rough, acoustic version of the song.[citation needed] This early version of the song features finger-picked acoustic guitar, Rose on lead vocals, and a chorus of vocals in the background, as in the Use Your Illusion album version, but does not feature the extended guitar solos or the breakdown outro. As such, this live version clocks in at a running time of approximately 4:43.

Slash states in his autobiography that an 18-minute version of "November Rain" was recorded at a session with guitarist Manny Charlton (of rock band Nazareth) in 1986, before the recording sessions for Appetite for Destruction began.[2]:151

According to a story told to the audience during the 2006 leg of the Chinese Democracy Tour, none of the other band members had wanted to partake in the production of this song (or the other notable ballad "Estranged"). Slash and McKagan were particularly opposed to the drift to symphonic ballads, and felt their choice of more direct rock songs were being overlooked by Rose. However, Axl talked them into it over discussions at Can-Am studios (where some of the album was recorded and mixed). It should be noted that claims of such harsh musical differences were specifically disputed by Slash in his autobiography.[2]:454 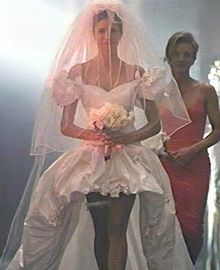 The narrative quality of the music video accentuated the epic nature of the song. The video (directed by Andrew "Andy" Morahan)[8] portrays Rose marrying his then-girlfriend Stephanie Seymour, intercut with a live performance in a theatre. Particularly, it can be noted for its large budget (about $1.5 million, including Seymour's dress, worth $8,000) and sweeping cinematography. It is one of the most expensive music videos ever.[9] Slash is prominently featured in some of the video's most memorable scenes, including a sequence of helicopter shots swooping around him as he plays the first guitar solo and a later scene where he plays the third solo while standing on Rose's piano onstage. Casting coordinator Mark Roberton observed; "the camera-man had a lot of responsibility, as the crane-cam was so close to Slash, precariously stood atop a piano that was near the stage edge. One wrong twitch and the guitarist would've had a long drop!" The video for "November Rain" uses the full version of the song as opposed to an abridged version. Orpheum Theater, a theater in downtown Los Angeles was acquired for an evening shoot that went several hours into the night, and, unlike usual common practice, they didn't mime for any of the takes. Between several differing versions of "November Rain", while the cameras on cranes that swooped close to Slash's frets were reviewed and set up for the next shot - the band entertained the 1,500 extras by playing more of their songs.

This was the first time they had played augmented by an orchestra, something the band were especially pleased by (other earlier examples of strings used in rock music were by Deep Purple, Pink Floyd and The Moody Blues).

For the outside shots of Slash while he is playing the first solo, Rose had originally envisioned it taking place in a "cool field" of sorts. However, since the video was shot in winter, there were no good-looking fields around, and eventually the band decided to use a church in New Mexico. Coincidentally, this was the same church used in the movie Silverado.[10]

Brad Hartmaier art directed the New Mexico sequences at the Silverado Movie Ranch. Working from sketches he made while sitting in the hotel bar, Hartmaier managed to build and dress two church sets. The Exterior church set was a dilapidated old church that he trucked out to the middle of a large prairie. Multiple crews worked for 24 hours straight building a duplicate church complete with fly away walls, hand made cathedral windows and decorations befitting the southwestern region where it was shot. Hartmeier was in the church with a walkie-talkie with Slash as a helicopter circled above for the big shot. Slash asked him what he did and he replied; "I'm the art director slash prop man, slash painter, slash mad scientist". Slash quickly replied with a chuckle..."Ha ha, I'm just Slash".

Hartmeier later said of working on the video, "It was the best experience of my life."

Nigel Phelps was the original Art Director; Hartmaier took his place when Phelps moved onto a feature film during the later part of the making of the video.

The priest in the video, an Italian man named Gianantonio, was a friend of Rose. Unbeknownst to the band, the church used for the interior shots was where the priest had performed some of his last services, eight years prior to the shooting of the video. The priest now advocates human rights at the borders of Mexico and, as such, in May 2011 received death threats from criminal organizations, so that Amnesty International raised an appeal to action[11] for his safety, which was signed on June 14, 2011.

The music videos for "November Rain," "Don't Cry" and "Estranged" form an unofficial trilogy of sorts. While never specifically confirmed by the band, Rose and Del James have made statements supporting this idea.[12][13] The similarity in production, style and plots can be considered evidence of this intent.

As stated at the end of the video, "November Rain" is based on the short story "Without You" by James, available in his 1995 book The Language of Fear. The story concerns a rock star grieving over the death of his on-and-off-again girlfriend, who had committed suicide (inspired by Rose's troubled relationship with Erin Everly).

While much speculation exists about how Seymour's character in the video died, the relationship between the video clip and James' short story strongly suggests that she kills herself. During the funeral sequence, a mirror is visible, covering over half her face, a technique used by funeral homes to allow victims of head trauma to have the appearance of a full face in the event of an open casket funeral.

The video remained popular throughout the rest of the decade. At the end of 1992, MTV placed "November Rain" at #1 on their top 100 videos of that year. Subsequently, it often appeared at #1 or in the top 10 of several future all-time MTV countdowns throughout the '90s.

"November Rain" has been a staple at Guns N' Roses concerts ever since it was released in 1991. The song is usually preceded by Rose, sometimes playing "It's Alright" by Black Sabbath or "Someone Saved My Life Tonight" by Elton John on piano. On the Chinese Democracy Tour, each of the guitar solos is played by a different guitarist. Robin Finck (2001) or Richard Fortus (2002–present) play the first one, Finck (2001–2007) or DJ Ashba (2009–present) play the second one, and Buckethead (2001–2002) or Bumblefoot (2006–present) play the final solo.

Although the song peaked only at #9 in Germany, it remained on the chart for 51 weeks, thus becoming the 24th best-selling single of all time in the country.[14] November Rain is also the only single in US chart history which broke into the US top 10 with a guitar solo over 1 minute long.