In computer science, cycle detection is the algorithmic problem of finding a cycle in a sequence of iterated function values.

For any function ƒ that maps a finite set S to itself, and any initial value x0 in S, the sequence of iterated function values

must eventually use the same value twice: there must be some i ≠ j such that xi = xj. Once this happens, the sequence must continue by repeating the cycle of values from xi to xj−1. Cycle detection is the problem of finding i and j, given ƒ and x0. 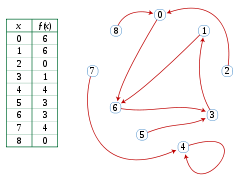 The cycle to be detected is the repeating subsequence of values 6, 3, 1 in this sequence.

Let S be any finite set, ƒ be any function from S to itself, and x0 be any element of S. For any i > 0, let xi = ƒ(xi−1). Let μ be the smallest index such that the value xμ reappears infinitely often within the sequence of values xi, and let λ (the loop length) be the smallest positive integer such that xμ = xλ+μ. The cycle detection problem is the task of finding λ and μ.

One can view the same problem graph-theoretically, by constructing a functional graph (that is, a directed graph in which each vertex has a single outgoing edge) the vertices of which are the elements of S and the edges of which map an element to the corresponding function value, as shown in the figure. The set of vertices reachable from any starting vertex x0 form a subgraph with a shape resembling the Greek letter rho (ρ): a path of length μ from x0 to a cycle of λ vertices.

Generally, ƒ will not be specified as a table of values, as we have given it in the figure above. Rather, we may be given access either to the sequence of values xi, or to a subroutine for calculating ƒ. The task is to find λ and μ while examining as few values from the sequence or performing as few subroutine calls as possible. Typically, also, the space complexity of an algorithm for the cycle detection problem is of importance: we wish to solve the problem while using an amount of memory significantly smaller than it would take to store the entire sequence.

In some applications, and in particular in Pollard's rho algorithm for integer factorization, the algorithm has much more limited access to S and to ƒ. In Pollard's rho algorithm, for instance, S is the set of integers modulo an unknown prime factor of the number to be factorized, so even the size of S is unknown to the algorithm. We may view a cycle detection algorithm for this application as having the following capabilities: it initially has in its memory an object representing a pointer to the starting value x0. At any step, it may perform one of three actions: it may copy any pointer it has to another object in memory, it may apply ƒ and replace any of its pointers by a pointer to the next object in the sequence, or it may apply a subroutine for determining whether two of its pointers represent equal values in the sequence. The equality test action may involve some nontrivial computation: in Pollard's rho algorithm, it is implemented by testing whether the difference between two stored values has a nontrivial gcd with the number to be factored. In this context, we will call an algorithm that only uses pointer copying, advancement within the sequence, and equality tests a pointer algorithm.

If the input is given as a subroutine for calculating ƒ, the cycle detection problem may be trivially solved using only λ+μ function applications, simply by computing the sequence of values xi and using a data structure such as a hash table to store these values and test whether each subsequent value has already been stored. However, the space complexity of this algorithm is λ+μ, unnecessarily large. Additionally, to implement this method as a pointer algorithm would require applying the equality test to each pair of values, resulting in quadratic time overall. Thus, research in this area has concentrated on two goals: using less space than this naive algorithm, and finding pointer algorithms that use fewer equality tests. 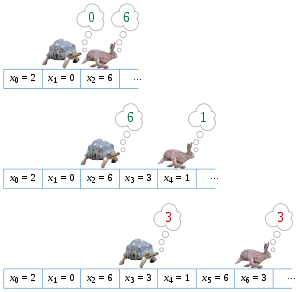 Floyd's cycle-finding algorithm, also called the "tortoise and the hare" algorithm, is a pointer algorithm that uses only two pointers, which move through the sequence at different speeds. The algorithm is named for Robert W. Floyd, who invented it in the late 1960s.[1]

The key insight in the algorithm is that, for any integers i ≥ μ and k ≥ 0, xi = xi + kλ, where λ is the length of the loop to be found. In particular, whenever i = kλ ≥ μ, it follows that xi = x2i. Thus, the algorithm only needs to check for repeated values of this special form, one twice as far from the start of the sequence than the other, to find a period ν of a repetition that is a multiple of λ. Once ν is found, the algorithm retraces the sequence from its start to find the first repeated value xμ in the sequence, using the fact that λ divides ν and therefore that xμ = xν + μ. Finally, once the value of μ is known it is trivial to find the length λ of the shortest repeating cycle, by searching for the first position μ + λ for which xμ + λ = xμ.

The algorithm thus maintains two pointers into the given sequence, one (the tortoise) at xi, and the other (the hare) at x2i. At each step of the algorithm, it increases i by one, moving the tortoise one step forward and the hare two steps forward in the sequence, and then compares the sequence values at these two pointers. The smallest value of i > 0 for which the tortoise and hare point to equal values is the desired value ν.

The following Python code shows how this idea may be implemented as an algorithm.

This code only accesses the sequence by storing and copying pointers, function evaluations, and equality tests; therefore, it qualifies as a pointer algorithm. The algorithm uses O(λ + μ) operations of these types, and O(1) storage space.

Richard P. Brent described an alternative cycle detection algorithm that, like the tortoise and hare algorithm, requires only two pointers into the sequence.[2] However, it is based on a different principle: searching for the smallest power of two 2i that is larger than both λ and μ. For i = 0, 1, 2, etc., the algorithm compares x2i−1 with each subsequent sequence value up to the next power of two, stopping when it finds a match. It has two advantages compared to the tortoise and hare algorithm: it finds the correct length λ of the cycle directly, rather than needing to search for it in a subsequent stage, and its steps involve only one evaluation of ƒ rather than three.

The following Python code shows how this technique works in more detail.

Like the tortoise and hare algorithm, this is a pointer algorithm that uses O(λ + μ) tests and function evaluations and O(1) storage space. It is not difficult to show that the number of function evaluations can never be higher than for Floyd's algorithm. Brent claims that, on average, his cycle finding algorithm runs around 36% more quickly than Floyd's and that it speeds up the Pollard rho algorithm by around 24%. He also performs an average case analysis for a randomized version of the algorithm in which the sequence of indices traced by the slower of the two pointers is not the powers of two themselves, but rather a randomized multiple of the powers of two. Although his main intended application was in integer factorization algorithms, Brent also discusses applications in testing pseudorandom number generators.

A number of authors have studied techniques for cycle detection that use more memory than Floyd's and Brent's methods, but detect cycles more quickly. In general these methods store several previously-computed sequence values, and test whether each new value equals one of the previously-computed values. In order to do so quickly, they typically use a hash table or similar data structure for storing the previously-computed values, and therefore are not pointer algorithms: in particular, they usually cannot be applied to Pollard's rho algorithm. Where these methods differ is in how they determine which values to store. Following Nivasch,[3] we survey these techniques briefly.

Cycle detection has been used in many applications.