The music of Austin, Texas, USA has gone beyond 6th Street and now includes other areas such as Red River, the University of Texas, the Warehouse District and Downtown, South Lamar, South Austin, East Austin and the Market District where bars and clubs of every kind can be found. Every night over one hundred venues stage live music. Austin's official motto is the "Live Music Capital of the World".

Austin's musical heritage began in 1933 when Threadgill's, a venue that later hosted renowned artists such as Janis Joplin, first opened its doors. Soon after in the 1940s, other music venues such as Liberty Lunch and the Victory Grill started popping up around the city. The Victory Grill, which was part of the "chitlin circuit" featuring big bands, jazz and blues, became famous for later hosting musical legends including B.B. King, Ike Turner and Tina Turner.

In 1964, Texas' last true dance hall, the Broken Spoke, opened. The late-1960s and 1970s saw the country music popularized by Willie Nelson and others being joined by a host of other music brought by the more liberal inhabitants, who migrated to Austin during these two decades. Specifically, Roky Erickson and his 13th Floor Elevators helped bring in this psychedelic era.

Austin was home to the Vulcan Gas Company that featured headliners such as the 13th Floor Elevators, (Johnny and Edgar) Winter brothers, and Shiva's Headband. The Vulcan morphed into the Armadillo World Headquarters in 1970 and for more than ten years featured music of all genres, from Bruce Springsteen to Bette Midler, as well as local ballet, blues and jazz. The artwork from this establishment was a part of the Austin scene and the Armadillo became the Austin city animal. Songs such as Gary P. Nunn's "London Homesick Blues" (which includes in the chorus "I want to go home with the armadillo") made this a staple of Austin. The artist who began the Armadillo logo was Jim Franklin, who is still working today. 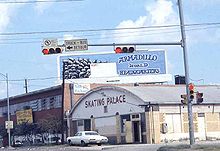 The Armadillo World Headquarters in 1976.

In the following years, Austin gained a reputation as a place where struggling musicians could launch their careers in front of receptive audiences, at informal live venues. A major influence during this time was Clifford Antone and the namesake blues club he founded in 1975, at the age of 25. Antone's became one of the very first music venues on Austin's 6th Street and fostered the careers of a number of musicians, including Stevie Ray Vaughan. Liberty Lunch was a live-music venue in Austin, Texas that first began as an eatery. During its heyday in the late 1970s and 1980s, it featured all kinds of music, including reggae and ska, punk, indie, country and rock. The venue was forced to close to make way for Austin's downtown redevelopment rampage in the late 1990s. Since then, Liberty Lunch has attained a (partly deserved) legendary status in the history of Austin music. Now-defunct Armadillo World Headquarters has attained a similar status.

The punk/new wave era in Austin began in earnest in 1978. The Club Foot played an important role in hosting many of the local punk/new wave acts. The city's first two rock/new wave bands, the Skunks and the Violators, made their debut at a University-area club called Raul's in February. The explosive show by the Sex Pistols in San Antonio the previous month helped build toward an excited reception for local purveyors of the style.[1] The Skunks' lineup consisted of Jesse Sublett on bass and vocals, Eddie Munoz on guitar and Bill Blackmon on drums. The Violators featured Kathy Valentine (later of the Go-Go's), Carla Olson (later of the Textones), Marilyn Dean and Sublett on bass. The Violators were short-lived, as all the members except for Sublett moved to LA the following year. Margaret Moser, of the Austin Chronicle, later wrote that "The Skunks put Austin on the rock n' roll map." [2] Another influential band that led the punk scene in Austin was the Big Boys.

Austin became one of the important stops on every tour of important punk/new wave acts. Many of these bands, such as the Police, Joe Jackson, Blondie and Talking Heads, played at the Armadillo. A number of them, including the Clash, Elvis Costello and Blondie, would make appearances at gigs by the Skunks and take the opportunity to jam with the band.[2][3]

The 1980s and 1990s also helped shape Austin's music scene. Waterloo Records, which has been voted the best independent record store in the country and hosts live in-store shows, first opened in 1982. Austinite Stevie Ray Vaughan won a Grammy in 1990 for best contemporary blues album. After tragically dying in a helicopter crash, he was memorialized with a statue on the shores of Austin's Lady Bird Lake. Additionally in the early 1990s, Austin earned the title of Live Music Capital of the World, because of the number of live music venues. It still holds that title today.[4]

Visitors and Austinites alike may notice the 10-foot guitars standing on the sides of the city's streets. In 2006, Gibson Guitar brought Guitar Town to Austin, placing 35 of these giant guitars around the city.

The Austin Music Foundation is one of several Austin groups that help independent artists further their music careers. Assisting musicians with medical needs are the Simms Foundation and Health Alliance for Austin Musicians (HAAM). Helping to promote the $1 billion music industry in the city is the Austin Music Office. A department of the Austin Convention & Visitors Bureau, the Austin Music Office offers creative, personalized assistance in booking live music, discounted Austin Compilation CDs and mini-guides to the city's live music scene, assistance with utilization of live music venues for off-site events, and guidance with local music attractions and creation of music tours.[5]

The PBS live music television show Austin City Limits began in 1976 and has featured, as of 2005, over 500 artists of various genres, including rock, folk, country, bluegrass and zydeco. Part responsible for Austin's reputation as a live music hub, the show is broadcast worldwide and stands as the longest running music television program ever. Public tours of Studio 6A are given on Fridays at 10:30 a.m.

Austin was also home to the Austin Music Network (AMN), which broadcast from 1994 to 2005. AMN, featured on cable channel 15, proclaimed itself to be the only non-profit independent music television channel, and its programming was mostly music videos or recorded live sessions, interspersed with presenters. Although all musical tastes were broadcast, AMN emphasized non-mainstream music such as indie, punk, blues, country and jazz.

Today channel 15 is still a 24-hour music channel now run by Music and Entertainment Television (M*E). M*E launched October 1, 2005 and is currently broadcast to Austin and the 44 surrounding cities. M*E is a regional network dedicated to showcasing and providing television exposure for regional artists as well as the hundreds of touring groups that make up the vibrant Texas live music scene. Supporting established artists and promoting and discovering new talent is a priority. M*E is the entertainment resource, with venue schedules, artist information, interviews and local live music shows every night at 7 p.m. on M*E Live! from Austin. M*E represents different musical genres and areas of the arts community with numerous original programs highlighting everything from filmmakers to art galleries, and musicians to the ballet. In addition, M*E's mostly music line-up, spotlights live performance footage, concept music videos as well as biographies, reviews, restaurant tours and more.[6]

Austin City Limits Music Festival with view of stages and the Austin skyline.

Austin is the home of South by Southwest (SXSW), an annual film, music and interactive conference and festival, and the expanding number of fringe events that take place during the festival, at venues all over town. In the fall, Austin hosts the Austin City Limits Music Festival (ACL) and the Fun Fun Fun Fest. Every summer, local businesses put on a series of free blues shows in Zilker Park entitled "Blues on the Green." Numerous other music festivals occur year-round. Other annual festivals include the "Keep Austin Weird Festival" and the Heart of Texas Quadruple Bypass Music Festival a.k.a. The Texas Rockfest.

Austin is home to other large annual festivals including:

The Austin Chronicle, Austin Convention & Visitors Bureau and Do512 offer information on the most common venues that host local bands.

In addition to the usual restaurant/bar venues listed above, Austin offers live music in unexpected places as well. These unique venues include:

Some Austin musicians who are currently active in the city include: 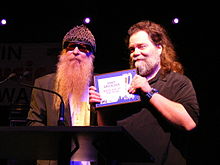 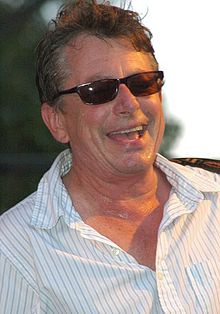 Joe Ely in concert at the Blues On the Green music series, 2006.

Musicians who previously contributed to the Austin music scene (including those who have broken up or moved from the city):

The Austin Music Memorial, at the Joe and Teresa Long Center, honors those who have contributed to the development of the Austin music community.