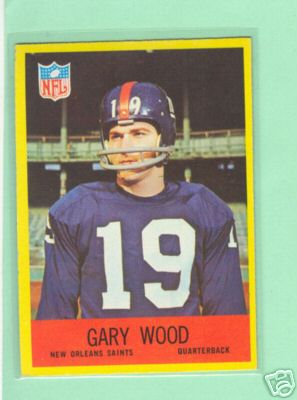 The 5'11 quarterback was drafted out of in the by the in the eighth round. Wood posted unremarkable stats in his time in the with a career completion percentage of 46.5% and a mediocre of 54.5 [http://www.jt-sw.com/football/pro/players.nsf/ID/04510100] .

Wood was inducted into the on , [http://www.jewishsports.org/jewishsports/detail.asp?id=72] .

After graduating from Cortland High School in Gary Wood had an outstanding career as the three-year starting at beginning in 1961, his sophomore season. Wood was the leading rusher and passer for the Big Red every year in which he was the starter.

Wood had a decent season for the Giants backing up starter .

In 1967, Wood was picked up in the for the . Wood played in only two games for the Saints in the 1967 season and was traded back to New York later for a draft pick.

Wood spent the remainder of his NFL career in New York backing up .

Following his stint in the CFL, Wood opened an insurance firm in and helped build Temple Beth Torah in . He was inducted into the Cornell Athletic Hall of Fame in 1979 and the Jewish Sports Hall of Fame in 1996.