Cevio is the capital of the district of Vallemaggia in the canton of Ticino in Switzerland. On 22 October 2006 Cevio grew by incorporating the villages of Bignasco and Cavergno, previously municipalities in their own right.

In the fall of 2006, Cavergno and Bignasco were incorporated into the municipality, despite an attempt by Bignasco to resist the incorporation in the courts. 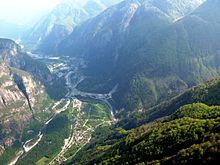 The municipality is located in the Vallemaggia district. It is the center of the Rovana sub-district and is located at the confluence of the Maggia and Rovana rivers. It consists of a number of scattered settlements. Until 1858, the village of Linescio was part of Cevio, and in 2006, the former municipality of Cavergno joined Cevio.[4]

The blazon of the municipal coat of arms is Aure St. maurice riding a horse argent holding a flag gules a cross argent and in base three fleurs de li or.[5] 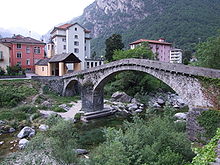 Most of the population (as of 2000[update]) speaks Italian language (387 or 77.9%), with German being second most common (54 or 10.9%) and Spanish being third (21 or 4.2%). There are 12 people who speak French and 1 person who speaks Romansh.[8] The inhabitants of Cevio speak a dialect that is very different from standard Italian. Cevio is one of the municipalities of Ticino in which Italian has most notably lost ground.

Of the 476 residents, 364 (76.47 percent) are Swiss citizens. The largest non-Swiss groups are from Italy, Spain, Portugal, Bosnia and Herzegovina and Sri Lanka. The unusually high number of non-Swiss in the municipality is due to the abundance of jobs in the quarries and hospital.

As of 2000[update], there were 186 people who were single and never married in the municipality. There were 235 married individuals, 52 widows or widowers and 24 individuals who are divorced.[8]

As of 2000[update] the average number of residents per living room was 0.54 which is less people per room than the cantonal average of 0.6 per room. In this case, a room is defined as space of a housing unit of at least 4 m2 (43 sq ft) as normal bedrooms, dining rooms, living rooms, kitchens and habitable cellars and attics.[10] About 53.9% of the total households were owner occupied, or in other words did not pay rent (though they may have a mortgage or a rent-to-own agreement).[11] 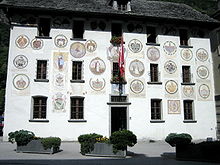 The Respini-Moretti House, the Case Franzoni and the Museo di Valmaggia, the Church of S. Maria del Ponte alla Rovana, the Parish Church of S. Maria Assunta e S. Giovanni with Ossuary and Portico, and the Pretorio are all listed as Swiss heritage site of national significance. The villages of Bignasco, Boschetto, Cevio/Rovana and the Val Bavona are all part of the Inventory of Swiss Heritage Sites.[14] 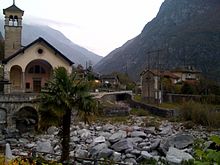 In Cevio there were a total of 197 students (as of 2009[update]). The Ticino education system provides up to three years of non-mandatory kindergarten and in Cevio there were 23 children in kindergarten. The primary school program lasts for five years and includes both a standard school and a special school. In the municipality, 62 students attended the standard primary schools and 2 students attended the special school. In the lower secondary school system, students either attend a two year middle school followed by a two year pre-apprenticeship or they attend a four year program to prepare for higher education. There were 49 students in the two year middle school, while 17 students were in the four year advanced program.

The upper secondary school includes several options, but at the end of the upper secondary program, a student will be prepared to enter a trade or to continue on to a university or college. In Ticino, vocational students may either attend school while working on their internship or apprenticeship (which takes three or four years) or may attend school followed by an internship or apprenticeship (which takes one year as a full-time student or one and a half to two years as a part-time student).[21] There were 7 vocational students who were attending school full-time and 33 who attend part-time.

As of 2000[update], there were 236 students in Cevio who came from another municipality, while 16 residents attended schools outside the municipality.[18]