The passenger stock consists of high-floor, bi-directional, single-articulated electrical multiple units. The trains are formed from sets of 2 or 3 semi-permanently connected cars, the increase to 3-car trains being introduced progressively on the busiest routes in 2010, following substantial platform extension works. The trains are fully automated and have no driver, but a Passenger Service Agent (PSA), and titled the "Train Captain" in the system's earlier years, is in attendance in each train and can take control at a driver's console if required.

There have been three different main types of DLR rolling stock, but only two of them (the B90/B92/B2K fleet and the B07 fleet) are in operation; the original P86/P89 stock having been withdrawn in 1991/1995 and sold to a German operator in Essen.

The passenger stock consists of high-floor, bi-directional, single-articulated electrical multiple units. The trains have four doors on each side and each train is normally composed of two 28-metre (92 ft)-long cars. A third car was added on the busiest routes in 2010.[1][2][7] Each car has 70 seats and has a total capacity of 284 passengers.[8]

The cars have no driver's cab, although there is a small driver's console concealed behind a locked panel at each outer car end from which the Passenger Service Agent (PSA) can drive the train when necessary. Other consoles at each door opening allow the PSA to control door closure and make announcements whilst patrolling the train. Because of the absence of a driver's position, the fully glazed car ends provide a panoramic forward (or rear) view for passengers.[6] At least one PSA is required on each train to close the doors upon departing and for emergency situations, such as taking the controls or evacuating the train, especially in tunnelled sections.[9] 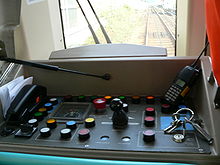 Despite having high floors and being highly automated, the cars are derived from a German light rail design, which was intended for use in systems with elements of street running. All the cars that have operated on the system look similar, but there have been five separate types, three of which are still in operation on the Docklands Light Railway. A further car type, with quite different styling, was first displayed in March 2008 and entered service in September 2008.

The DLR stock units have a maximum speed of 100 km/h (62 mph), but the fastest speed reached is 80 km/h (50 mph) in the tunnel under the River Thames to Woolwich Arsenal station. 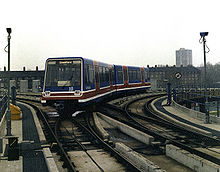 The fleet for the 1987 opening consisted of 11 light-rail vehicles (LRVs) built in 1986 by Linke-Hofmann-Busch (LHB, now Alstom) in Germany and numbered 01 to 11. These were referred to as P86 stock,[10] the 'P' referring to Poplar depot, where they were maintained. Vehicle 11 made history several times. It was part of a light rail demonstration at Debdale Park, Manchester for which it had a pantograph fitted by Balfour Beatty. The demonstration took place on 9 February 1987 as evaluation trials for a potential tram system in Manchester. P11 was the last unit to be delivered to the DLR at Poplar on 30 March 1987, without the pantograph. It was also the vehicle used by the Queen and the Duke of Edinburgh during the royal opening of the railway on 30 July 1987: the train ran from Island Gardens (when originally above ground) to Poplar and then to Tower Gateway. P11 also formed the first revenue-earning DLR vehicle and was the first vehicle to be moved to Essen in 1991.[10]

There were 84 seats in each car with most arranged in transverse bays of four to take advantage of the large windows. There were two wheelchair bays, and twelve longitudinal seats increased the circulation area. An emergency console for the Train Captain was provided but locked when out of use. These cars were built for the initial above-ground system and, because of failing to meet safety requirements, were not allowed to operate on the tunnelled extension to Bank.[10] Because of this, and because adaptation to a new signalling system was too costly, these cars were sold in 1991 to Essener Verkehrs-AG of Essen, Germany, where they were extensively rebuilt and put into service on its Stadtbahn between 1994 and 1998.[5] Originally, they retained DLR colours and were limited to route U11, but after a further modification programme started in 2005, trains are appearing in a yellow livery and are used on all routes. 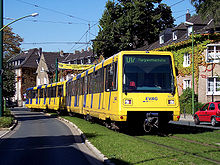 In 1989-1990, BREL in Derby, UK, supplied another ten LRVs, numbered 12 to 21. These share the characteristics of the original P86 stock. They were, though, equipped with sufficient fire-proofing to operate through the tunnels of the Bank extension. These were designated P89 stock and remained in operation on the DLR until 1995. The two initial car types were effectively identical in appearance; apart from the car numbers one difference was the red livery underneath the end window was notably more orange and reflective on the P89 cars than on the original P86 ones. The P89s were rebuilt with sliding doors. They were also sold to Essen, where they entered service between 1999 and 2004 after major modifications had been carried out. They are now painted yellow and blue and are used on all routes of the Essen Stadtbahn network.

As the Essen Stadtbahn does not use fully automated driving, and uses overhead line rather than third rail power collection, the modifications to both sets of cars involved fitting driver's cabs and pantographs. Today , the P89 operates on U17 and U18 lines. 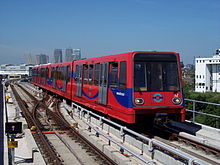 Further vehicles were required as the network grew and as the original P86 and P89 cars had to be replaced due to their unsuitability for the changed system conditions. Bombardier built 23 vehicles of B90 stock in 1991, 47 vehicles of B92 stock between 1993 and 1995, and 24 vehicles of B2K stock in 2001 and 2002. When new the B2K stock differed from the earlier vehicles in appearance as the doors and handrails were painted in colours contrasting to their surroundings. They are also fitted with internal LCD display screens. These differences were all mandated by the Rail Vehicle Accessibility Regulations (RVAR) of the Disability Discrimination Act (DDA), which were not in force when the older cars were built.

The 'B' in the type codes refers to Beckton DLR depot, where they are primarily maintained. They are of a common design and can be operated interchangeably in trains of up to three sets. 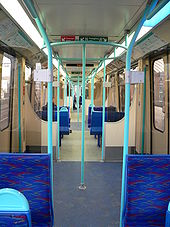 The numbering of the last B2K cars restarted at 01, reusing the numbers of the replaced, original cars. The main reason for this was that the DLR computer system had only been designed originally to handle 2-digit car numbers, and an upgrade to allow 3-digit car numbers did not take place until some time after these cars were received.

DLR cars had a common livery of blue, red, and white upon delivery. Over the years, several vehicles have received all-over advertising livery. A new livery of turquoise and blue was tested on B92 car 40 in the mid-1990s, but it was not adopted, and the car was repainted in standard livery a few years later. The B90, B92 and B2K stocks were refurbished starting in 2004 with the completed trains re-entering service with a redesigned interior and in a new livery of red and blue with grey doors to comply with the Disability Discrimination Act. The refurbished units feature an Audio and Visual Information System (AVIS) which gives audio announcements when approaching a station: "This train is for destination, the next stop is next stop", for example: "This train is for Bank, the next stop is Canary Wharf". It also announces the name of the station when the doors have opened, for example: "This is Canary Wharf".[11] 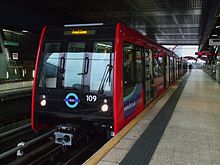 In June 2006, another 31 vehicles were added to this order. This batch was partly funded by the Olympic Delivery Authority and was planned to be delivered by 2009.[14] If previous naming conventions are applied, then it is expected these additional vehicles will be known as the second batch of B07 stock, or the Olympic batch, and will be numbered 125 to 155. All units of this batch have been delivered, with the first six units having been delivered by June 2009. All units entered service by the end of June 2010.

The B07 stock units feature a totally redesigned exterior and interior. It features larger windows and doors and more leg room. In addition, several technical improvements were made for better acceleration, altered door functions to enable faster boarding and alighting, and improved braking for a smoother ride.[15]

The B07 units were the first to operate as 3-car trains in early 2010; the B92 trains followed operating in this way later in 2010. The initial 3-car route was the mainstream Bank to Lewisham route, but the lengthened trains were subsequently operated on other routes as well.

All DLR stock has wheels which have a more angled profile than that on mainline trains, which is effective in dealing with the tight curves encountered on DLR routes. However, a downside to this innovation is that they are partly responsible for violent shaking as the train travels at higher speeds on the straight parts of the route.