Highway 5 is a north-south route in southern British Columbia, Canada. It connects the southern Trans-Canada route (Highway 1) with the northern Yellowhead route (Highway 16), providing the shortest land connection between Vancouver and Edmonton. It is 524 km (326 mi) in total length. The portion of Highway 5 south of Kamloops is also known as the Coquihalla Highway, while its northern portion is known as the Southern Yellowhead Highway. The Coquihalla section was a toll road until 2008. 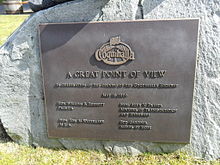 A plaque commemorating the opening of the Coquihalla Highway in Hope, British Columbia.

The current Highway 5 is not the first highway in B.C. to have this designation. Between 1941 and 1953, the section of present-day Highway 97 and Highway 97A between Kaleden, just north of Osoyoos, and Salmon Arm was Highway 5. In 1953, the '5' designation was moved to the route designated today as Highway 5A to the south of Kamloops, and its current route north of Kamloops. In 1986, Highway 5 was re-routed to its present alignment between Hope and Merritt. The direct route between Merritt and Kamloops was completed in 1987. The total cost for the highway between Hope and Merritt was approximately $848 million.[1]

South of Kamloops, Highway 5 is known as the Coquihalla Highway (colloquially "the Coke"), and is a 186 km (116 mi)-long freeway, varying between four and six lanes and having a posted speed limit of 110 km/h (68 mph). The route that the Coquihalla follows through the Cascade Mountains is approximately the same route traced out by the former Kettle Valley Railway, which existed on this route between 1912 and 1958. It is so-named because it generally follows the Coquihalla River for about 60 km (37 mi) near Hope and also uses the Coquihalla Pass.

In 2003, Premier Gordon Campbell announced that his Liberal government was going to turn over the operation and maintenance of the Coquihalla, as well as the toll revenue, to a private operator. The public and numerous businesses in the Interior of British Columbia were strongly opposed to this plan, so the provincial government shelved it three months after its announcement.

On September 26, 2008, the provincial government lifted the Coquihalla tolls permanently, effective 1:00 pm that day.[1][2] The toll station and signs have since been dismantled.[3]

Although the Yellowhead Highway system is considered part of the Trans-Canada Highway network, the Highway 5 segment is not marked as such. 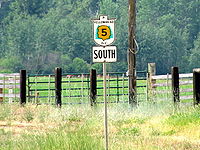 Highway 5 begins in the south at its junction with Highway 3 at an uninhabited location known as "Othello," 7 km (4 mi) east of Hope (named after a nearby siding on the Kettle Valley Railway, which used many Shakespearean names). The exit numbers on the Coquihalla are a continuation of those on Highway 1 west of Hope. 35 km (22 mi) north of Othello, after passing through five interchanges, Highway 5 reaches the Great Bear snow shed, which is a landmark on the route. 13 km (8 mi) north of the snow shed, after passing through another interchange and the 1244 m (4,147 ft) Coquihalla Pass, Highway 5 reaches the former toll booth; it was the only highway in British Columbia to have tolls. The toll for a typical passenger vehicle on the highway was C$10. 61 km (38 mi) and five interchanges later, the Coquihalla enters the city of Merritt at its south junction with Highway 5A and Highway 97C.

This diagram illustrates the wrong-way concurrency between Highways 5 and 97 through Kamloops.

Highway 5 then goes 4 km (2½ mi) through the eastern area of Merritt before reaching its northern junction with Highway 5A. The Coquihalla has three more interchanges and one mountain pass, the Clapperton Creek Summit, in its remaining 72 km (45 mi) between Merritt and its end at a junction with Highways 1 and 97 within the Afton area of Kamloops. Highway 5 continues east for 7 km (4 mi) concurrent with Highways 1 and 97 through Kamloops. This stretch of road, which carries 97 South and 5 North on the same lanes (and vice versa), is the only wrong-way concurrency in British Columbia.

After separating from Highways 1 and 97, Highway 5 proceeds north for approximately 19 km (12 mi), temporarily leaving Kamloops city limits as a four-lane highway, before re-entering the city at the Rayleigh community and continuing north. It becomes a two-lane highway at Heffley Creek and the exit to Sun Peaks resorts, both of which indicate the final northern boundary of Kamloops.

Highway 5 follows the North Thompson River north from Heffley Creek for approximately 54 km (34 mi), along a parallel course with a branch of the Canadian National Railway, passing through Barriere, to a junction with Highway 24 at Little Fort. 30 km (19 mi) north of Little Fort, while continuing to follow the North Thompson and the CN Railway, Highway 5 reaches the community of Clearwater. It proceeds northeast for another 107 km (67 mi), passing Vavenby en route, to the community of Blue River, and then 109 km (68 mi) further north through the Columbia Mountains, passing by the community of Valemount to its northern terminus at Tête Jaune Cache, where it meets Highway 16.

From south to north, the following intersections are observed along Highway 5[4]:

Kw'ikw'iya:la (Coquihalla) in the Halq'emeylem language of the Stó:lō, is a place name meaning "stingy container". It refers specifically to a fishing rock near the mouth of what is now known as the Coquihalla River. This rock is a good platform for spearing salmon. According to Stó:lō oral history, the skw'exweq (water babies, underwater people) who inhabit a pool close by the rock, would swim out and pull the salmon off the spears, allowing only certain fisherman to catch the salmon.[5]

The route is also often referred to simply as "The Coke." A popular song by country singer Corb Lund, entitled "Hurtin' Albertan", makes reference to this, with the lyric "...there's good weather up on the Coke."

Also, the Calgary punk Band Chixdiggit sing about this highway in their song "I Drove the Coquihalla".