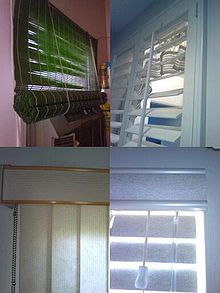 Many window blinds are made with slats of fabric, wood, plastic or metal that adjust by rotating from an open position to a closed position by allowing slats to overlap. A roller blind does not have slats but comprises a single piece of material. Metal window blinds are often used outside of the house or business to protect against theft, temperature, vision, bad weather and fire (in fire-prone areas). Often these blinds are machine-operated, rather than hand operated.

The horizontal version uses a thin woven "ladder" system to suspend the slats and enable slats to be closed via a rotating drum to which each upper end of the woven ladder is wrapped and attached. A lift cord allows the blind to be pulled up and stack tightly to top of window when desired.

The vertical version uses a generally wider slat and has the added feature of being able to pull a cord to stack the slats together either to one side or to separate in the centre and stack on each end. This vertical blind allows rotation of slats by a rotating shaft in the upper head rail housing which runs through independent geared carriers that will convert twisting of tilt rail to a rotation of each individual slat in synchrony. The original vertical blinds were invented in Kansas City[citation needed], Missouri, by Edward Bopp and Fredrick Bopp who held the original patent. The company name at the time was Sun Vertical. In the 1960s the patent and company was sold.

In Britain awnings are also considered blinds. A blind limits observation and thus “blinds” the observer to the view. The main types are slat blinds which can be opened in two ways and solid blinds.

Solid blinds can only be raised or lowered and are sometimes called shades. There are types of blinds, such as Holland blinds and woven-wood blinds, where there are small spaces between the slats. In others such as pleated shades there are no spaces because the slats are sewn inside fabric.

Window blinds reduce the heat from sunlight. Ancient Egyptian pharaohs had blinds made of reeds. The most inexpensive blinds in the 19th century were home-made roller blinds, made of cloth.

Window blinds can be manually drawn using a cord, or automated through motorization. Controls for motorized blinds can be from a wall switch or keypad, remote control, or a personal computer, eliminating the need for cords and allowing control of otherwise inaccessible windows. A number of homes are integrating blind control with central CBUS solutions. This control provides ease of use, but is also effective to control blind operation to reduce heat loss during winter or heat effects during summer. 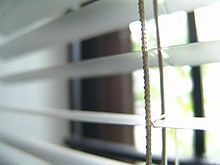 The most common window blinds are slat blinds, which consist of many horizontal slats, usually of metal or vinyl, connected with string in a way that they can be rotated to allow light to pass between the slats, rotated up to about 170 degrees to hide the light, or pulled up so that the entire window is clear. Vertical blinds consist of slats of stiffened fabric, plastic, or metal hanging by one end from a track; like the horizontal versions, the slats can be rotated 90 degrees to allow light to pass through or to fold up on one side of a door or window. Vertical blinds are very good at controlling how much natural or exterior light comes into a room, due to the ability of the slats to close tightly.

A Venetian blind has horizontal slats, one above another. Venetian blinds are basic slatted blinds made of metal or plastic; wooden slats are sometimes used but in the US these are now usually referred to as wood blinds or bamboo blinds. They are suspended by strips of cloth called tapes, or by cords, by which all slats in unison can be rotated through nearly 180 degrees. The slats can be rotated such that they overlap with one side facing inward and then in the opposite direction such that they overlap with the other side facing inward. Between those extremes, various degrees of separation may be effected between the slats by varying the rotation. There are also lift cords passing through slots in each slat. When these cords are pulled, the bottom of the blind moves upward causing the lowest slats to press the underside of the next highest slat as the blind is raised. A modern variation of the lift cords combines them with the rotational cords in slots on the two edges of each slat. This avoids the slots otherwise required to allow a slat to rotate despite a lift cord passing through it, thus decreasing the amount of light passing through a closed blind. Slat width can be between 16–120 mm, with 25 mm being a common width.

Related patents were taken out in England by Gowin Knight in 1760[1] and Edward Beran on 11 December 1769,[2] but Venetian blinds were known to the French long before then, the French name for Venetian blinds being persiennes. In 1761 St. Peter's Church, Philadelphia had such blinds.[3]

In the late 19th and early 20th centuries, Venetian blinds were widely adopted in office buildings to regulate light and air. A large modern complex in the US that adopted Venetian blinds was Rockefeller Center’s RCA Building (better known as the Radio City building) in New York City, completed in the 1930s. One of the largest orders for Venetian blinds ever placed was to the Burlington Venetian Blind Co., of Burlington, Vt., which supplied blinds for the windows of the Empire State Building in New York City.[4] 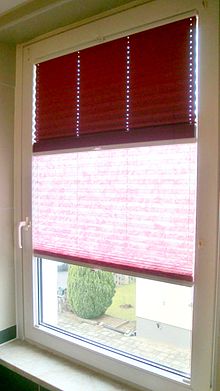 Unlike horizontal blinds, vertical blinds are less likely to be damaged in strong winds and to hold dirt, but are more likely to break down. Generally they require less muscle strength, and are faster to operate.

A window blind is a means of screening a window, achieving similar results to those obtained by fitting curtains. Blinds are typically the same width and height as the window itself or slightly wider and taller - depending on whether they are fixed inside or outside the window's reveal (i.e. the wall recess within which the window itself is fixed).

Window blinds have varying thermal effects: they can block unwanted heat of the summer sun and they can keep in heat in cold weather. But in both of these applications, they also reduce light to varying degrees, depending on the design. Many kinds of blinds attempt varying balances of privacy and shade. Blinds can be made of a number of different materials and manufactured in a number of different ways. This usually determines the name by which the blind is commonly known.

Blinds made of fabric can either rolled up thanks to a thin cord and small horizontal slats (Roman blind), folding blinds with no horizontal slats create a less structured look (Austrian blinds). To create the blinds are used mainly silk and organza. A silk cloth can be present or embroidery stitch, which will give tissue varied terrain. If you combine silk and cotton, it is possible to achieve a two-layered fabric, similar to the skin of the animal. [5]

Wood blinds on an outside window.

Wooden blinds are generally known as Venetian blinds. A number of horizontal wooden slats are joined together by corded pulleys which can either gather all the slats at the top of the window to reveal the view or simply angle the slats while allowing some light to travel through the blind yet retaining some level of privacy. Wooden blinds come in a number of finishes (determined by the type of wood used, which ranges from painted to most types of solid oak varieties) and sizes (determined by the width of each slat which is usually available in one of three widths - 25 mm, 35 mm or 50 mm). Wooden Venetian blinds are also available as vertical blinds. These are usually made up of wider slats and operate in virtually the same way as their horizontal counterparts (i.e. instead of being drawn upwards to reveal the window, the draw to one side gathering in a vertical bunch).

Pinoleum blinds are made up of small wooden twigs laid horizontally which are joined together by vertical threading. The resulting weave is, as a result, only flexible vertically and can be drawn upwards once manufactured as a roller blind or in a similar fashion to a Venetian blind. Conservatory blinds are often made with Pinoleum.[6] Drawings in ancient Egyptian tombs of reed blinds have been reported[who?] and a common window blind during the 19th century is said to have been the home-made roller shade, a shade that has been underestimated.

Faux wood blinds are an alternative to real wood blinds. Made of a composite of man-made materials and natural wood particles, faux wood is also a less expensive choice than natural wood. These blinds have become more popular as the products have matured, becoming cheaper and more versatile at the same time offering more of a natural wood look. Current faux wood blinds are more warp resistant than ever before, have UV ratings as high as 500 and come in many colors that would be hard to find in natural wood blinds. Because of their resistance to warping, faux wood window blinds are a great choice for areas of extreme temperature swings. They are also the ideal choice for places with high moisture, such as bathrooms and kitchens, since they do not warp as easily as natural wood[7]

Venetian blinds, both horizontal and vertical, are available in a number of man-made materials (either resembling wood or metal or simply plastic). These are better suited to areas where moisture or direct contact with water is likely to cause a problem, such as bathrooms and kitchens. These blinds are often available with micro slats (as small as 16 mm or less). The result of smaller slats is that more have to be used to obscure the window completely. Conservatory blinds (i.e. ceiling fixed via a number of horizontal pulleys) are often made of man-made materials.

Some vehicles include or are retrofitted with sun blinds for rear and rear side windows. See also car glass. These blinds are used to protect the vehicle and the passengers from direct sunlight.

Car shades are another common way to protect the vehicle. The shades for the rear and front windows are designed to be unfolded and sit against the window. They can be made of plastic or cardboard. The shades that go on the side windows of a vehicle are usually attached using suction cups or using static cling.

Solid fabric and slat car blinds have given way to cheaper and more flexible, folding wire-framed "dark-stocking" synthetic blinds. These are used where the car owner has not dark-tinted the glass of the car windows enough. or during the day, wishing to have more privacy.