The Michigan Senate is the upper house of the Michigan Legislature. The Senate consists of 38 members, who are elected from constituencies having approximately 212,400 to 263,500 residents.

Senators are elected at the same time as the governor and serve four-year terms concurrent with the governor of Michigan's term of office. Senate and gubernatorial elections are always held two years after the election for president of the United States, with the next election scheduled for November 4, 2014. Terms for senators begin on January 1 following the November general election. In general, Senators are eligible to serve two full four-year terms, except that Senators who have served more than half of a four-year term may only serve one full four-year term.

As elected officials, members of the Senate also receive the courtesy title of the Honorable (abbreviated to Hon. or Hon'ble) for life. 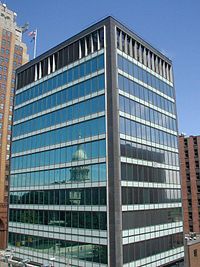 Composition of the Senate

As of November 2010, Republicans hold a two-thirds supermajority following the midterm elections.

The Republican Caucus, with 26 members, currently holds the majority. The Michigan Senate has been controlled by the Republicans since 1983.

The Democratic Caucus, with 12 members, is currently in the minority.

Members of the Michigan Senate