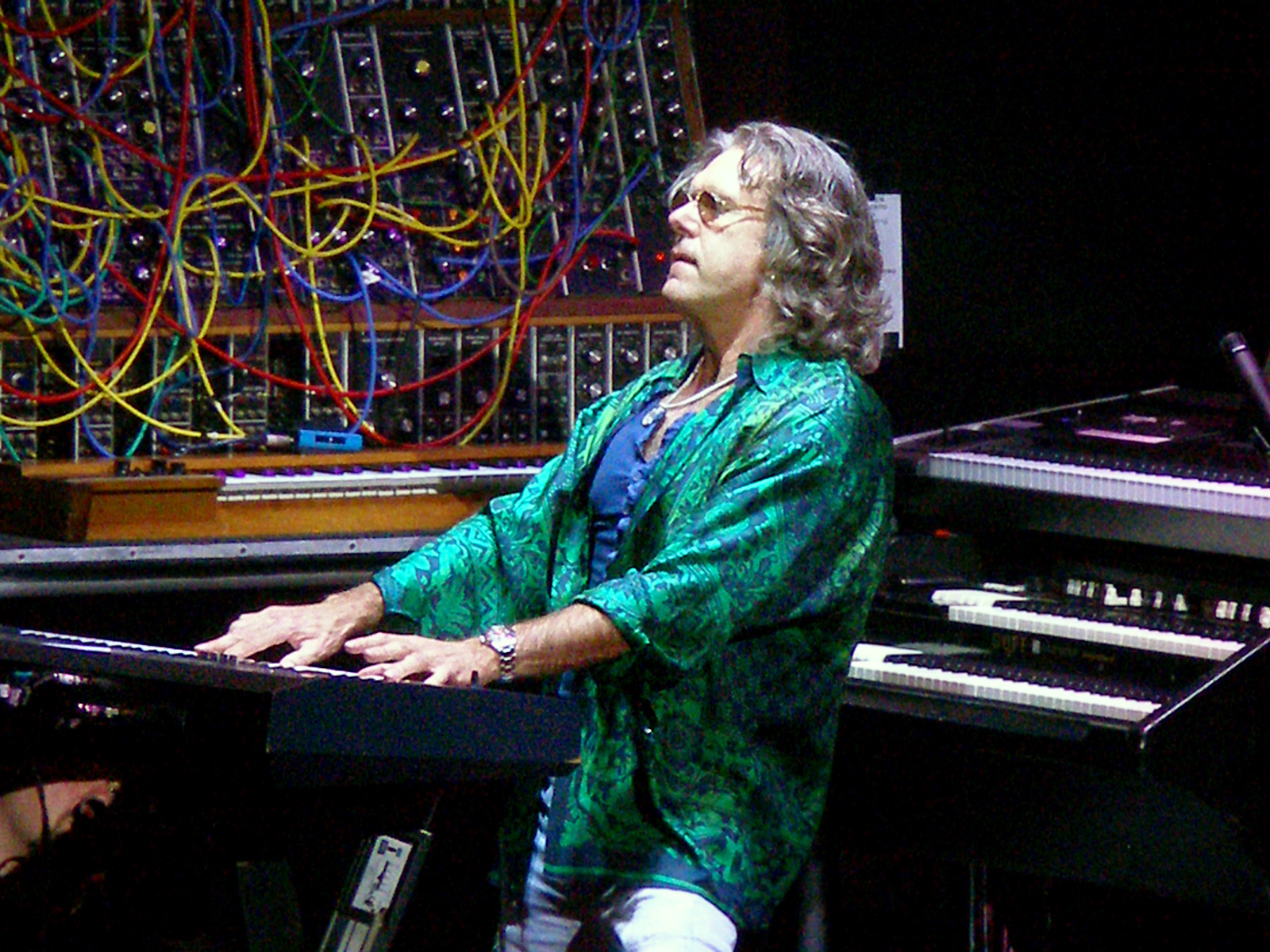 Keith Noel Emerson (born in , ) is a British and composer. Formerly a member of the Keith Emerson Trio, John Brown's Bodies, The T-Bones, V.I.P.s, 's backing band, and (which evolved from P.P.Arnold's band), he started (ELP), one of the early supergroups, in 1970. Following the breakup of ELP, "circa" 1979, Emerson had modest success with in the 1980s. ELP reunited during the early 90s. Emerson also reunited in 2002 for a tour. He is currently on tour (as of Aug/Sept 2008) with The Keith Emerson Band and the new album titled "Keith Emerson Band Featuring Marc Bonilla" is released in Aug/Sept 2008.

Emerson grew up in the seaside resort of , , . As a child, he learned , from which he derived a lot of inspiration to create his own style, combining classical music, , and rock themes. Emerson became intrigued with the after hearing jazz organist perform "Rock Candy" and it subsequently became his instrument of choice for performing in the late 60s. In 1969, Emerson incorporated the into his battery of keyboards. While other artists such as and had used the Moog in studio recordings, Emerson was the first artist to tour with one.

He is known for his technical skill and for his live antics, including using knives to wedge down specific keys of his during solos, playing the organ upside down while having it lie over him and backwards while standing behind it. He also employed a special rig to rotate his piano end-over-end while he's "playing" it (purely theatrical, since acoustic pianos cannot function when turned upside down in this manner). Along with contemporaries Richard Wright of , Tony Banks of Genesis, Billy Ritchie of Clouds and of Yes, Emerson is widely regarded as one of the top keyboard players of the era.

On ELP's ous first album, Emerson's classical quotes went largely uncredited. "The Barbarian" is heavily influenced by by Bartók, and "Knife Edge" is virtually a note-for-note restatement of "Sifonietta" by Janáček. Note-for-note extracts were taken from pieces by Bartók, Janáček and Bach, mixed in with some original material, and credited completely to Emerson, Lake, Palmer and roadie . By 1971, with the releases "Pictures At An Exhibition" and "Trilogy", Emerson began to fully credit classical composers, for the piano piece which inspired the first album, and for "Hoedown" on the second. Emerson was adamant that he did not use 's orchestration of in developing his own version.

In 2004 Emerson published his autobiography entitled "Pictures of an Exhibitionist", which deals with his entire career, particularly focusing on his early days with , and his nearly career-ending nerve-graft surgery in 1993.

Emerson has provided music for a number of films since 1980, including 's "Inferno" and "", the 1981 thriller "Nighthawks" and, more recently, "". He was also the composer for the short-lived 1994 animated television series "Iron Man".

Emerson has released a number of solo albums and is currently working on another with regular collaborator and producer . The new album titled, "Keith Emerson Band Featuring Marc Bonilla" was released in August/September 2008. He currently on tours with his own band in Russia and Baltic (Aug/Sept 2008) and in Japan (Oct 2008). The current tour band members are Marc Bonilla (G/Vo), Travis Davis (B), Tony Pia (Dr).

On stage Emerson started out on Hammond organ, with a grand piano toward the back of the stage. By the end of his time with The Nice, the standard arrangement was two Hammond organs, a C-3 and an L-100, placed facing each other with the C-3 to the left from the audience point of view. The L-100 took plenty of abuse during the stage act and was usually reinforced, to the point where it weighed so much that, on at least one occasion, Emerson became trapped beneath it and had to be rescued by a roadie. At any given time Emerson is said to have owned several L-100 models, in various stages of repair, to support his act. The C-3, in contrast, seems to have lasted for years.

Although the Hammond L-100 with its shorter manuals is considered a “poor man’s” Hammond, Emerson not only played much of the early Nice music on his L-100, but also made good use of some of its unique features which his bigger Hammond C-3 does not provide. The L-100 has a self-starting motor, which - if turned off and on in short intervals - renders the whole organ into a wailing howl while the note generator tries to recover to pitch. The L-100 also features a spring-loaded reverb tank, which produces bomb-like noises if shaken. Both effects can be heard in abundance on “Rondo 69”. On “Ars Longa Vita Brevis” Emerson even uses the reverb tank as a musical instrument, tapping the internal spring against the tank bottom in an effort to create a chromatic scale of "boings".

With ELP, Emerson added the Moog synthesizer behind the C-3 with the keyboard and stacked on the top of the organ. The ribbon controller allowed Emerson to vary pitch, volume or timbre of the output from the Moog by moving his finger up and down the length of a touch-sensitive strip. It also could be used as a phallic symbol, which quickly became a feature of the act. When the Minimoog entered the act it was placed where needed, such as on top of the grand piano. The same location was also used for an electric keyboard, used almost exclusively for the encore piece .

Occasionally Emerson used a , when available. In particular, at the he used the pipe organ for the introductory section of "Pictures at an Exhibition". The organ is located at the rear above the stage, at the top of a series of steps where choirs can stand. The end of the introductory passage is followed by a drum roll, covering the time while Emerson descended the steps. While all went well for the recording used to produce the album, the debut tour performance at the same venue ground to a halt as the power failed, just as Emerson arrived at the Hammond organ to open the next part of the piece. After a lengthy delay the performance continued with only the Hammond L-100 functioning.

Emerson also used the organ at the for "The Three Fates" from the eponymous debut album by the group. He also used another pipe organ for "The Only Way (Hymn)" from the sophomore "" album. It is not known if he also used it in a live context.

Amplifiers and speakers behind Emerson became more elaborate, including a Leslie unit. There was also a board attached to the front of the stack, intended as a target for his knife throwing. During the Brain Salad Surgery tour, at the end of the show, a sequencer in the Moog Modular synthesizer was set running at an increasing rate, with the Moog Synthesizer pivoting to face the audience while a large pair of silver bat wings was deployed at the back of the synthesizer.

As the technology of electronic keyboard instruments became more sophisticated, Emerson was quick to adopt new instruments, such as the polyphonic synthesizer, one of which can be seen on the video promoting . Emerson was reported to have spent $50,000 to buy the Yamaha GX-1 synthesizer at the time of the album. Emerson later bought a 2nd GX-1 from John Paul Jones of , to use to repair his GX-1, which was damaged by a tractor crash into Emerson's home studio. At the time that Emerson left England in the early 1990s to move to Santa Monica, California, he sold the majority of his keyboard equipment, though not the modular Moog. The original Yamaha GX-1 was bought by of movie soundtrack fame, while the John Paul Jones GX-1 was bought by a collector in Italy. Other more elaborate innovations have been previously described in this article.

In 1978 Emerson became the official endorser of the world's first fully polyphonic synthesizers, namely the and PS-3100. He started recording with them around this time too and the Korg PS-3300 was heavily used on the ELP album "Love Beach". Only 50 units were produced of this mega-monster of a synthesizer and it has achieved cult status today partly thanks to Emerson's endorsement. He carried on using it into the 80s, for example the Korg PS-3300 also dominates the 1981 film soundtrack for "Nighthawks" which starred Sylvester Stallone.

Even on the grand piano, Emerson refused to limit his technique to hitting the keys. He would sometimes reach into the interior and hit, pluck or strum the strings with his hand. The introduction to "Take a Pebble" includes chords and arpeggios played by pressing down on keys, to raise the dampers from the strings, and playing the strings inside the piano as one might play the . In the live performance of "Hang on to a Dream" with the Nice, recorded for the post-breakup album "Elegy", he performed a "" of sorts hitting the piano strings with a small hammer, followed by a lengthy wind-down returning to the song in which he alternated keyboard arpeggios with blows directly on the bass strings. The standard finale to the song has him reaching into the piano with fingers spread on both hands to pluck the final chord, presumably depressing the sustain pedal at the same time to lift all the string dampers. This can be clearly seen on a performance filmed for the television show .

* During the late 1970s and the 1980s, Emerson owned and lived in a house previously owned by , the author who created .

* Emerson has a private pilot's license, and enjoys riding motorcycles.

* He currently plays with his own group, the Keith Emerson Band featuring Marc Bonilla. Their newest self-titled album was released in Japan in August 2008, and Europe in September 2008.

* Emerson has two sons, Aaron (who is also a musician) and Damon (who is involved with graphics).

* Emerson currently lives in Southern California with his girlfriend.

Partial list of pieces based on other composers' works

Note that lack of credit does not imply plagiarism. It is certain that, where required, royalties were paid to composers or their estates. Permission to use pieces was sometimes denied by the composer's family or estate, as for instance with 's "Mars, the Bringer of War". was said to be somewhat puzzled by Emerson's take on Fanfare For the Common Man, but approved its use. , on the other hand, was thrilled by Emerson's electronic realization and declared that he wished he could have done it in that fashion himself.

* "The Barbarian", based on Allegro barbaro, Sz. 49, BB 63 by , uncredited (credited on Manticore re-pressing of the original LP - though not on cover).
* "Knife Edge", based on "Sinfonietta" by , uncredited (credited on the Manticore re-pressing of the LP - though not on cover); middle section based on "" by , uncredited.
* , by , credited.
* "Hoedown", from "Rodeo" by , credited, quoting "", Traditional.
* "Jerusalem", by C. Hubert H. Parry, credited.
* "Toccata", from a piano concerto by , endorsed by the composer, credited.
* "", by , credited.
* , by , quoted in an extended solo in live recordings from Poland.
* With Emerson, Lake & Powell, the main theme to "Touch & Go" is identical to the English Folk Song "Lovely Joan", better known as the counterpoint tune in Ralph Vaughan Williams "Fantasia on Greensleeves" Not credited. [Vaughan Williams:Greensleeves/Tallis Fantasia. The New Queen's Hall Orchestra/Wordsworth. Argo 440 116-2 (1994)]

*The surreal comedy series featured Keith Emerson, played by , as a Roman slave, fighting his enemies with .
*He was given his trademark knife by who was a roadie for The Nice in his earlier days.
*His favourite current-generation band is .
*He opened the Led Zeppelin reunion/Ahmet Ertegun Tribute concert at the O2 Arena in London on 10 Dec 2007 along with and Alan White (Yes) and (/Free). The supergroup played the new arrangement of "The Fanfare for the Common Man".