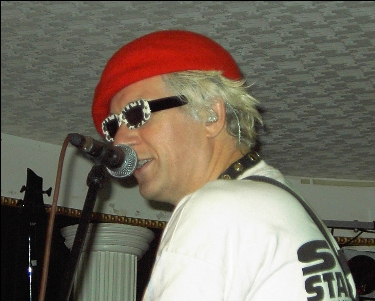 Captain Sensible (born Raymond Burns, , ) is a , songwriter, (and sometimes bassist) who grew up in , England, and co-founded the band in 1976. After leaving the band, he reinvented himself as an singer with a rebellious, self-conscious image. His signature headwear is a red .

He was born Raymond Ian Burns in , .Before joining The Damned he was in a covers band called Oasis.

Originally a member of the band, Sensible joined The Damned in 1976 on the suggestion of his work colleague , the band's drummer, filling a number of positions during his tenure (including bassist, lead guitarist and keyboardist), and eventually becoming the band's main songwriter following the departure of Brian James. He left in the 1980s to concentrate on solo projects, but rejoined in 1996 after Scabies left, and co-wrote "", the band's first new studio album for 12 years, in 2001. He continues to tour with the band today.

Sensible had a UK number one hit in 1982 with a cover of "Happy Talk", the Rodgers and Hammerstein song from "South Pacific", featuring backing by Dolly Mixture; this was later sampled for rap artist 's 2004 version of the same song. Other songs which became hits in the UK and various European countries were Rap parody "?", the anti-Christmas "One Christmas Catalogue" and anti- "Glad It's All Over". After quitting A&M Records he continued recording for various independent labels, including Deltic Records and Humbug Records. He has also toured with his solo band Punk Floyd.

Previously a member of the Green Party, in 2006 Sensible formed , for which he continues to serve as leader. An avowed "protest party" aiming to "give all politicians a kick up the jacksie", it entered into a sponsorship deal with in September 2006. [cite news
last = Loweth
first = Jenny
coauthors =
title = Crisp firm backs the new force in politics!
work =
pages =
language =
publisher = Bradford Telegraph and Argus
date = 2006-09-27
url =http://www.thetelegraphandargus.co.uk/news/newsindex/display.var.941438.0.crisp_firm_backs_the_new_force_in_politics.php
accessdate = 2007-10-02]