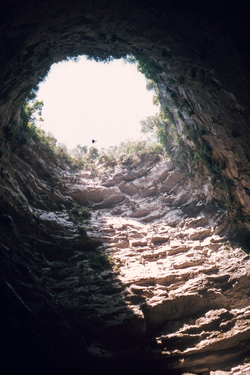 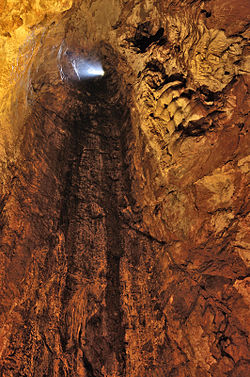 A pit cave, or vertical cave — or often simply called a pit (in the US) or pot (in the UK) — is a type of natural cave which contains one or more significant vertical shafts rather than being predominantly a conventional horizontal cave passage. Pit caves typically form in limestone as a result of long-term erosion by water. They can be open to the surface or found deep within horizontal caves. Among cavers, a pit is generally defined as a vertical drop of any depth that cannot be negotiated safely without the use of ropes or ladders.

Exploration into pit caves ("vertical caving", also called "pit caving") requires the use of equipment such as nylon kermantle rope or cable ladders. More specialized caving techniques such as the single rope technique (SRT) are common practice and the preferred method of pit exploration for cavers worldwide. The SRT involves the use of 9–11 mm nylon static rope and mechanical descenders/ascenders.

Vertical caving is a specialized sport that should be undertaken only after acquiring knowledge of, and expertise in, proper vertical caving equipment and its use. For obvious reasons, vertical caving is more dangerous than "horizontal caving". Vertical caving requires the intimate understanding of ropes, knots, anchors, rappelling devices and ascending systems. Veteran cavers typically are knowledgeable in self rescue techniques including change-overs (the act of switching from rappel to climb while on rope) and pick-offs (the act of rescuing a stranded caver from his rope and returning him to the ground).

Pit caving was pioneered by British geologist John Beaumont (c. 1650–1731) who gave an account of his descent into Lamb Leer Cavern to the Royal Society in 1681.[1] French caver Édouard-Alfred Martel (1859–1938) first achieved the descent and exploration of the Gouffre de Padirac, France, as early as 1889 and the first complete descent of a 110 m (360 ft) wet vertical shaft at Gaping Gill, in Yorkshire, England, in 1895. He developed his own techniques using ropes and metallic ladders. In the 1930s, as caving became increasingly popular in France, several clubs in the Alps made vertical cave exploration into a recognized outdoor sport.

During World War II, a team composed by Pierre Chevalier, Fernand Petzl, Charles Petit-Didier and others explored the Dent de Crolles cave system near Grenoble, France, which became the deepest known cave in the world (658 m (2,159 ft)) at that time. The lack of available technical equipment during the war forced Chevalier and his team to innovate and develop their own. The scaling-pole (1940), nylon ropes (1942), use of explosives in caves (1947) and mechanical rope-ascenders (Henri Brenot's "monkeys", first used by Chevalier and Brenot in a cave in 1934) can be traced historically to the exploration of the Dent de Crolles cave system.

In the late 1950s, American caver Bill Cuddington, known as "Vertical Bill", developed the single rope technique (SRT) in the US. In 1958, two Swiss alpinists, Juesi and Marti teamed up, creating the first rope ascender known as the Jumar. In 1968, Bruno Dressler asked Petzl, who worked as a metals machinist, to build a rope-ascending tool, today known as the Petzl Croll, that he had developed by adapting the Jumar to the specificity of pit caving. Pursuing these developments, in the 1970s Fernand Petzl started a small caving equipment manufacturing company Petzl, which is today a world leader in equipment for both caving, mountaineering and at-height safety in civil engineering. The development of the rappel rack and the evolution of mechanical ascension systems, notably helped extend the practice and safety of pit exploration to a larger venue of established cavers.