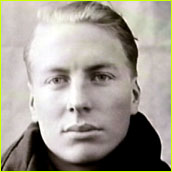 Andrew "Sandy" Comyn Irvine (born ; died 8 or ) was an English mountaineer who took part in the third British Expedition to the world's highest mountain, , in 1924. While attempting the of Mount Everest, he and his climbing partner disappeared somewhere high on the mountain's northeast ridge. The pair's last known sighting was only a few hundred metres from the summit.

Irvine was born in , , to a family with Scottish and Welsh roots. He was educated at and before enrolling at to study . He was a keen sportsman and excelled at rowing, becoming a member of the Oxford crew for the in 1922 and 1923.

Irvine is describedFact|date=March 2008 as a compassionate, expressive, shy and creative man of a tall, broad-shouldered, strong and immensely fit physique. His ability to improvise fixes or improvements to almost anything mechanical demonstrated a natural engineering .Fact|date=March 2008 During the , while still a schoolboy, he sent the a design for an to allow a machine gun to fire from a propeller-driven aeroplane without damaging the propeller's blades.Fact|date=March 2008 In 1919, he rode his motorcycle to the top of , a 3000-foot Welsh mountain, where he surprised a couple ( and his wife Mona) who had climbed it on foot.Fact|date=March 2008

In 1923 Irvine was chosen for a university expedition to , where he excelled on every front. It was only during the expedition that he and the expedition's leader, , discovered that they had met before on . Subsequently, on Odell's recommendation, Irvine was selected for the forthcoming third British Everest expedition on the grounds that he might be the "superman" that the expedition felt it needed. He was at the time still a 21-year-old student.

His companion and friend later wrote home to his wife, having set sail for the s, that Irvine "could be relied on for anything except perhaps conversation." He was later to make major and crucial innovations to the expedition's professionally designed sets, radically improving their functionality, lightness, and strength. He also maintained the expedition’s s, , s and many other devices. He was universally popular, and respected by his older colleagues for his ingenuity, companionability and unstinting hard work.

The ascent itself took place in early June, and the last day that the climbers were seen was . Keen-sighted expedition colleague Noel Odell reported seeing them at 12:50 pm ascending one of the major "steps" on the ridge and "going strongly for the top", but no evidence thus far has proved conclusively that they reached the summit. They never returned to high camp and died somewhere high on the mountain. It is still uncertain if they ever reached the summit, and Irvine's body has never been recovered.

In 1933, some nine years after the disappearance of Mallory and Irvine, was a member of 's expedition and equalled Norton’s verifiable record height of 28,126 feet (8573 m). At around 27,500 feet (8380 m), just below the first step, Wyn-Harris discovered Irvine's ice-axe, left over from Mallory and Irvine's attempt in 1924. Irvine's ice-axe was found lying on a rock in an area of relatively gentle gradient and some have since postulated, without definitive evidence, that this position might indicate a possible fall site.Fact|date=March 2008

The Mallory and Irvine Research Expedition

In 1999, Mallory's body was found at 26,760 ft (8,155 m) on the North Face of Everest by the . Two details noted when Mallory's body was discovered further fueled the speculation as to whether the pair did in fact reach the summit that day in 1924:

* Firstly, Mallory's daughter has always said that Mallory carried a photograph of his wife on his person with the intention of leaving it on the summit when he reached it. This photo was not found on the body when it was discovered. Given the excellent preservation of the body and its garments, this lack suggests that he may have reached the summit and deposited the photo there.

* Secondly, Mallory's snow goggles were in his pocket when the body was found, indicating that he died at night. This implies that he and Irvine had made a push for the summit and were descending very late in the day. Given their known departure time and movements, had they not made the summit, it is unlikely that they would have still been out by nightfall.

While tantalising, neither of these details is conclusive. What might provide concrete evidence would be the recovery of images contained in the cameras that the men were carrying. Unfortunately, neither of the two cameras that the expedition carried have been found. Many have speculated that Irvine may have been carrying one of the cameras when they died. Experts from Kodak have stated that if one of the cameras is found with film, there is a good chance that the film could be developed to produce "printable images", due to the nature of the black and white film that was used and the fact that it has, in effect, been in "deep freeze" for over three-quarters of a century.Fact|date=March 2008

In 1975, a Chinese climber named reported seeing the body of an "English dead" near the summit. He reported the discovery to , a Japanese mountaineer, in 1979. However, before more information could be obtained, Wang was killed in an the following day. Some believe that the body he saw would have been Mallory's, as Wang's bivouac was on a level line with the body he sighted. Others point out his description of the position of the body is not consistent with Mallory, who was face down and whose face was completely buried in . Inspired by the importance of the discovery of Irvine's body and the invaluable camera, high-altitude research expeditions spent time on Everest in 2001, 2004, and 2005 but were able to shed little further light on what had previously been known about his fate; speculation and debate continues, as does what is known in mountaineering circles as "The Mystery of Mallory and Irvine."

* Upon hearing of the disappearance of Andrew Irvine along with his partner George Mallory, a family friend wrote; "One cannot imagine Sandy content to float placidly in some quiet back-water, he was the sort that must struggle against the current and, if need be, go down foaming in full body over the precipice"

* , one of Irvine's friends wrote; "Irvine did not live long, but he lived well. Into his short life he crowded an overflowing measure of activity which found its climax in his last wonderful year, a year during which he rowed in the winning Oxford boat, explored Spitsbergen, fell in love with ski-ing, and – perhaps – conquered Everest. The English love rather to live well than to live long.’