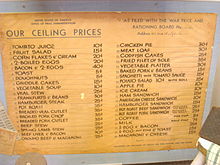 The Office of Price Administration (OPA) was established within the Office for Emergency Management of the United States government by Executive Order 8875 on August 28, 1941. The functions of the OPA was originally to control money (price controls) and rents after the outbreak of World War II.

President Franklin D. Roosevelt revived the Advisory Commission to World War I Council on National Defense on May 29, 1940, to include Price Stabilization and Consumer Protection Divisions. Both divisions merged to become the Office of Price Administration and Civilian Supply (OPACS) within the Office for Emergency Management by Executive Order 8734, April 11, 1941. Civil supply functions were transferred to the Office of Production Management.

It became an independent agency under the Emergency Price Control Act, January 30, 1942. The OPA had the power to place ceilings on all prices except agricultural commodities, and to ration scarce supplies of other items, including tires, automobiles, shoes, nylon, sugar, gasoline, fuel oil, coffee, meats and processed foods. At the peak, almost 90% of retail food prices were frozen. It could also authorize subsidies for production of some of those commodities.

Most functions of the OPA were transferred to the to newly established Office of Temporary Controls (OTC) by Executive Order 9809, December 12, 1946. The Financial Reporting Division was transferred to the Federal Trade Commission.

The OPA was abolished effective May 29, 1947, by the General Liquidation Order issued March 14, 1947, by the OPA Administrator. Some of its functions were taken up by successor agencies:

During the Korean War, similar functions were performed by the Office of Price Stabilization (OPS).

The OPA is featured, in fictionalized form as the Bureau of Price Regulation, in Rex Stout's Nero Wolfe mystery novel The Silent Speaker.

Administrators of the office