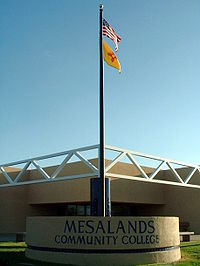 In 1993, the school received authorization from the New Mexico Commission on Higher Education to begin offering Associate of Applied Science degrees for two of its programs. Additional programs began offering degrees the following year and Tucumcari Area Vocational School was renamed Mesa Technical College. Owing to additional growth and expansion during the succeeding years, on September 11, 2001, the school's name was changed to Mesalands Community College. The institution currently offers both Associate of Applied Science and Associate of Arts degrees.[2]

On April 14, 2009, Mesalands Community College and Sandia National Laboratories signed a memorandum of understanding allowing the college's North American Wind Research and Training Center and the lab to collaborate on such projects as turbine operations and maintenance, reliability of turbine components, and repair methods. It is the first memo of its kind between a national laboratory and a two-year college.[3]