The Compensation Act 2006 (c 29) is an Act of the Parliament of the United Kingdom, introduced in response to concerns about a growing compensation culture but conversely to ensure that the public received dependable service from claims management companies. In introducing the Bill, Baroness Ashton said that it was intended "to tackle perceptions that can lead to a disproportionate fear of litigation and risk averse behaviour; to find ways to discourage and resist bad claims; and to improve the system for those with a valid claim for compensation."[3]

The Act brought in specific changes to the law of liability and damages in negligence and breach of statutory duty. It further introduced a scheme of regulation for claims management companies.

Section 1 of the Act makes statutory provision that, in determining whether the omission of certain steps amounts to a breach of duty, the court may consider whether such steps, had they been performed, would prevent some desirable activity. For example, the court must consider whether precautionary and defensive measures might prevent something socially useful. Though this principle had often been observed by the common law (see Miller v Jackson 1977, Denning's judgment), the Act places it on a statutory footing.[4][5][6][7]

Section 2 stipulates that, in the event of an accident, an apology or offer or redress, such as paying for medical treatment, is not, of itself an admission of liability. 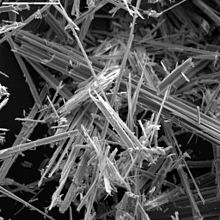 Asbestos fibres - a single fibre is believed to cause mesothelioma

Section 3 reverses the common law on allocation of damages in various mesothelioma claims arising from unlawful exposure to asbestos. In 2002, the House of Lords had controversially ruled that, where several parties had unlawfully exposed the claimant to asbestos and risk of pleural and peritoneal mesothelioma, all were liable for his injury, even though the claimant could not prove which individual party had provided the asbestos fibers that cause the disease.[8] However, in Barker v. Corus UK Ltd[9] the House of Lords held that the parties who contributed to the risk were severally but not jointly liable. This meant that a single defendant could only be held liable for a fraction of any damages proportional to the exposure for which they were responsible and that a claimant could only recover all their damages if they succeeded in actions against all such contributors. Section 3 reverses the House of Lords decision by making all such parties jointly and severally liable for the damage so that a claimant could recover the totality of their damages, even from a subgroup of potential defendants.[10]

Section 3 is "treated as having always had effect" (s.16(3)) and also extends to Scotland and Northern Ireland (s.17).

Section 12 creates a Claims Management Services Tribunal to which a person may appeal a decision of the Regulator about authorisation (s.13(1)). There is a further route of appeal to the Court of Appeal (s.13(4)). The Regulator may also refer complaints or questions about the professional conduct of a claims management company to the Tribunal (s.13(2)).

Part 2 came progressively into force from 1 December 2006. As of March 2008[update], only section 13(2) (referrals to the Tribunal by the Regulator) remains to be brought into force.[11]

The following orders have been made under this section: