A deathbed conversion is the adoption of a particular religious faith shortly before dying. Making a conversion on one's deathbed may reflect an immediate change of belief, a desire to formalize longer-term beliefs, a desire to complete a process of conversion already underway, or a subconscious mechanism to cope with fear of death. Claims of the deathbed conversion of famous or influential figures are commonly used as rhetorical devices, but such claims are rarely verifiable.

The Baptism of Constantine, as imagined by students of Raphael

Conversions at the point of death have a long history. The first recorded deathbed conversion appears in the Gospel of Luke where the good thief, crucified beside Jesus, expresses belief in Christ. Jesus accepts his conversion, saying “Today you shall be with Me in Paradise".[1]

Perhaps the most momentous conversion in Western history was that of Constantine I, Roman Emperor and later proclaimed a Christian Saint. While his belief in Christianity occurred long before his death, it was only on his deathbed that he was baptised, in 337. While traditional sources disagree as to why this happened so late, modern historiography concludes[citation needed] that Constantine chose religious tolerance as an instrument to bolster his reign. His edict of toleration, subsequent patronage of the Christian church, even his convening of and presiding over the First Ecumenical Council of Nicaea, were all carried out while he was still officially a pagan, and while he bore the pagan office of pontifex maximus.

The deathbed conversion has also been a target of humor. Voltaire, on his own deathbed, was asked by a priest to renounce Satan and turn to God, he is alleged to have replied, "Now is no time to be making new enemies". However, his last words are said to have been, "For God's sake, let me die in peace."[2][3]

Sir Allan Napier MacNab, Canadian political leader, died August 8, 1862 at in Hamilton, Ontario. His deathbed conversion to Catholicism caused a furor in the press in the following days. The Toronto Globe and the Hamilton Spectator expressed strong doubts about the conversion, and the Anglican rector of Christ Church in Hamilton declared that MacNab died a Protestant.[4] MacNab's Catholic baptism is recorded at St. Mary's Cathedral in Hamilton, performed by John, Bishop of Hamilton, on 7 August 1862. Lending credibility to this conversion, MacNab's second wife, who predeceased him, was Catholic, and their two daughters were raised as Catholics.[5] 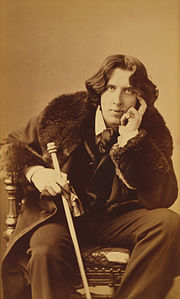 Author and wit Oscar Wilde converted to Catholicism during his final illness. His friend Robert Ross wrote that "He was conscious that people were in the room, and raised his hand when I asked him whether he understood. He pressed our hands. I then sent in search of a priest, and after great difficulty found Father Cuthbert Dunne ... who came with me at once and administered Baptism and Extreme Unction. – Oscar could not take the Eucharist".[6] While Wilde's conversion may have come as a surprise, he had long maintained an interest in the Catholic Church, having met with Pope Pius IX in 1877 and describing the Roman Catholic Church as "for saints and sinners alone – for respectable people, the Anglican Church will do". However, how much of a believer in all the tenets of Catholicism Wilde ever was is arguable: in particular, against Robert Ross's insistence on the truth of Catholicism, Wilde's insistence "No, Robbie, it isn't true." [7][8][9]

In an interview with archbishop Luigi de Magistris, former head of the Apostolic Penitentiary of the Holy See, which deals with confessions and forgiveness of sins, he stated that during Antonio Gramsci's final illness, he "returned to the faith of his infancy" and "died taking the sacraments."[10] However Italian State documents on his death do not show that any religious official was sent for or received by Gramsci. Other witness accounts of his death do not mention any conversion to Catholicism.[11]

The poet Wallace Stevens was baptized a Catholic during his last days suffering from stomach cancer.[12] This account is disputed, particularly by Stevens's daughter, Holly,[13] and critic, Helen Vendler, who, in a letter to James Wm. Chichetto, thought Fr. Arthur Hanley was "forgetful" since "he was interviewed twenty years after Stevens' death."[14] In his response, Chichetto noted that Vendler ignored "the testimony of Dr. Edward Sennett (in charge of the Radiology Dept. at St. Francis Hospital when Stevens was admitted both times) and the Sisters with whom he [Chichetto] talked in 1977 (and later) who believed Fr. Hanley's account."[15]

Charles II of England reigned in a Protestant nation at a time of strong religious conflict. Though his sympathies were at least somewhat with the Catholic faith, he ruled as an Anglican, though he repeatedly attempted to lessen the persecution and legal penalties affecting non-Anglicans in England. As he lay dying following a stroke, released of the political need, he was received into the Catholic Church.[16]

One famous example is Charles Darwin's deathbed conversion in which it was claimed by Lady Hope that Darwin said: "How I wish I had not expressed my theory of evolution as I have done." He went on to say that he would like her to gather a congregation since he "would like to speak to them of Christ Jesus and His salvation, being in a state where he was eagerly savoring the heavenly anticipation of bliss."[17] Lady Hope's story was printed in the Boston Watchman Examiner. The story spread, and the claims were republished as late as October 1955 in the Reformation Review and in the Monthly Record of the Free Church of Scotland in February 1957.

From Darwin's son: "Lady Hope's account of my father's views on religion is quite untrue. I have publicly accused her of falsehood, but have not seen any reply." [17]

From Darwin's daughter: "I was present at his deathbed. Lady Hope was not present during his last illness, or any illness. I believe he never even saw her, but in any case she had no influence over him in any department of thought or belief. He never recanted any of his scientific views, either then or earlier. We think the story of his conversion was fabricated in the U.S.A. The whole story has no foundation whatever." [18]

Jean-Paul Sartre's atheism was foundational for his style of existentialist philosophy. In March 1980, about a month before his death, he was interviewed by his assistant, Benny Lévy, and within these interviews he expressed his interest in Judaism which was inspired by Levy's renewed interest in the faith. Through Sartre's study of Jewish history he became particularly interested in the messianic idea of the faith. Some people apparently took this to indicate a deathbed conversion; however, the text of the interviews makes it clear that he did not consider himself a Jew, and was interested in the ethical and "metaphysical character" of the Jewish religion, while continuing to reject the idea of an existing God.[citation needed]