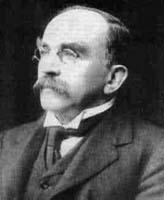 Sir Joseph Larmor ( , , – , , [MacTutor Biography|id=Larmor] ), a and who made innovations in the understanding of , dynamics, , and the electron theory of matter. His most influential work was "Aether and Matter", a theoretical physics book published in 1900.

He grew up in , the son of a shopkeeper. He was a student at , then , then . After teaching natural philosophy (physics) for a few years at Queen's College, Galway, Ireland, in 1885 he accepted a lectureship in mathematics at . In 1903 he was appointed at Cambridge, a post he retained until his retirement in 1932. He never married.

Larmor proposed that the aether could be represented as a medium which was perfectly inible and elastic. Larmor believed the aether was separate from matter. He united Lord Kelvin's model of spinning gyrostats (e.g., es) with this .

Parallel to the development of , Larmor published the complete s in the "" in 1897 some two years before (1899, 1904) and eight years before (1905). Larmor predicted the of , at least for orbiting electrons, and verified that the () should occur for bodies whose atoms were held together by electromagnetic forces. In his book "Aether and Matter" (1900), he again presented the Lorentz transformations, time dilation and length contraction (treating these as dynamic rather than effects). Larmor opposed 's (though he supported it for a short time). Larmor rejected both the curvature of space and the special theory of relativity, to the extent that he claimed that an absolute time was essential to astronomy (Larmor 1924, 1927).

Larmor held that consisted of particles moving in the aether. Larmor believed the source of was a "particle" (which as early as 1894 he was referring to as the ). Thus, in what was apparently the first specific prediction of , he wrote "... individual electrons describe corresponding parts of their orbits in times shorter for the [rest] system in the ratio (1 - v2/c2)1/2" (Larmor 1897).

Larmor held that the flow of charged particles constitutes the current of conduction (but was not part of the ). Larmor calculated the rate of from an accelerating electron. Larmor explained the splitting of the s in a by the of electrons.

In 1919, Larmor proposed s are self-regenerative action on the 's surface.

Motivated by his strong opposition to Home Rule for Ireland, in February 1911 Larmor ran for and was elected as Member of Parliament for with the party. He remained in parliament until the 1922 general election, at which point the Irish question had been settled. Upon his retirement from Cambridge in 1932 Larmor moved back to in .