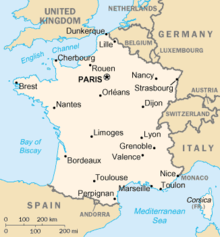 In overseas France, a person from metropolitan France is often called a métro, short for métropolitain.

The term "metropolitan France" dates from the country's colonial period (from the 16th through the 20th centuries), when France was referred to as la Métropole (literally "the Metropolis") as distinguished from its colonies and protectorates, known as les colonies or l'Empire. Similar terms existed to describe other European colonial powers (e.g. "metropolitan Britain", "España metropolitana"). This usage of the words "metropolis" and "metropolitan" itself came from ancient Greek "metropolis" (from μήτηρ mētēr "mother" and πόλις pólis "city, town") which was the name for a city-state from which originated colonies across the Mediterranean (e.g. Marseille was a colony of the city-state of Phocaea, therefore Phocaea was the "metropolis" of Marseille). By extension "metropolis" and "metropolitan" came to mean "motherland", a nation or country as opposed to its colonies overseas.

Note that since INSEE is now calculating statistics for France entière, this practice has spread to international institutions so that for instance the French GDP published by the World Bank includes metropolitan France and the five overseas departments. The World Bank refers to this as "France" only, and not "entire France" as INSEE does.