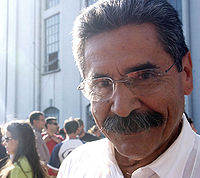 Olívio Dutra at the World Social Forum on January 25, 2005 in Porto Alegre.

Olívio de Oliveira Dutra (born 10 June 1941 in Bossoroca, Rio Grande do Sul) is a Brazilian politician. He is a founding member of the Workers' Party.[1]

Dutra graduated in Grammar school and became an employee of Banrisul, Rio Grande do Sul's then state owned bank, on 1961. In that position, he became familiarized with the Porto Alegre Bank Workers Union. He was elected President of the organization in 1975. On 1979 he organized a major strike of the government employees. For that reason, he was arrested by the political police of the military dictatorship and lost his term as the Union's President.

During the redemocratization of Brazilian politics, Dutra participated of the foundation of the Workers' Party section in his state, of which he was the President from 1980 to 1986. On the 1982 gubernatorial elections, the first in over twenty years, he was released as the Workers' Party candidate. He received unexpressive voting, coming in last place with more than 50,000 votes. In 1986, Dutra was elected Constitutional Congressman with over 55,000 votes. During the time in which he lived in Brasília, Dutra shared an apartment with Luiz Inácio Lula da Silva, also a Congressman and the former President of Brazil. Since then, they are close friends.

In 1988, contradicting all opinion polls, Dutra is elected Mayor of Porto Alegre with 34% of the votes. Differently from nowadays, at that time Brazilian electoral law did not allowed the dispute of a second round if any of the candidates failed to achieved more than a half of the valid votes. According to the polls, Congressman Antônio Britto from the Brazilian Democratic Movement Party was the favorite candidate among the population by a large margin. Britto ended up the dispute in third place, underneath fellow Congressman Carlos Araújo (then husband of Dilma Rousseff) of the Democratic Labour Party. It is interesting to note that Araújo belonged to the same party of the city's Mayor at the time, Alceu Collares, but failed to gather his electorate.

Dutra's term as Mayor of Porto Alegre, starting in 1989 and ending in 1992, was the first of four consecutive terms of the Workers' Party in the city, totalizing 16 years of administration. Because of that, Porto Alegre became a sort of display cabinet for the party in the rest of Brazil. A place where it experimented successful and innovative initiatives. Nevertheless, Dutra's administration was criticized for its intervention on the public transportation system, what generated bad relations between the City Hall and the bus concessionaire companies, forcing the government to pay them an indemnification.

After his term as Mayor had ended, in 1994, Dutra tried the governorship for a second time. He managed to obtain 35% of the votes on the first round and 47.79% on the second. He lost the office to Britto by a small margin of less than 5% of the valid votes.

In 1998, Britto tried the re-election and faced Dutra for a third time. Dutra's campaign focused on criticizing Britto's actions perceived as neoliberal politics, such as the privatization of the state owned telephony and energy companies. This time, Dutra won the election on second round by a small margin of only 97 thousand votes.

Dutra's term as Governor, from 1999 to 2003, was marked by the suspension of a deal established by Britto's administration concerning the opening of two car manufacturing companies in the state (General Motors and Ford). The deal included high tax exemption and flotation with interest rate below the market for the companies. The renegotiation proposed by Dutra was only accepted by GM. Other accomplishments of his administration include the creation of a State University and the introduction of the participatory budgeting at state level, following the previous experience of its implementation in Porto Alegre by his party.

Suffering from a large defamation campaign, promoted mainly by RBS media conglomerate (Rede Globo's local affiliate), as soon as a corruption scandal involving the Workers' Party and the Jogo do Bicho erupted, and without the majority in the State Assembly, where he faced major defeats, Dutra was politically worn out near his term's end. As a result, Dutra's reelection campaign was rejected in the Workers' Party primaries, where then Mayor of Porto Alegre Tarso Genro was selected to represent the party. Genro would be defeated by a margin of 5% in the second round by Germano Rigotto from the Brazilian Democratic Movement Party.

In 2002, Luís Inácio Lula da Silva was elected President, and appointed Dutra as Minister of Cities, a then recently created office. He would remain on this job until 2005, when Lula needed to reorganize the Brazilian cabinet to suit the Progressive Party in it. Dutra was then replaced by Márcio Fortes in a negotiation of the government with then President of the Congress Severino Cavalcanti.

In 2006, Dutra was the Workers' Party gubernatorial candidate for Rio Grande do Sul for a fourth time. He was defeated by then Congresswoman Yeda Crusius of the Brazilian Social Democratic Party on a second round by a margin of 7.88% of the votes.