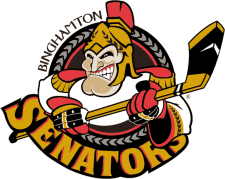 The Binghamton Senators are an team in the . They play in , at the .

AHL hockey returned to Binghamton after a five-year absence in 2002 (the city had a team in the United Hockey League in the interim). The Binghamton Senators took to the ice and enjoyed a successful freshman season, going 43–26–9 with 97 pts. They breezed by their first two playoff rounds, but were easily defeated by the in 5 games. The 2003–04 season was not as successful as the loss of both and weakened the team. They went 34–34–9 and quietly exited the playoffs thanks to a 2–0 sweep at the hands of the .

The NHL lockout of 2004–05 meant Binghamton got a return visit from their recent graduates and several other NHL players, including Jason Spezza, Antoine Vermette, Anton Volchenkov, Chris Neil, Josh Langfeld and Brian Pothier, making the Senators a legitimate Calder Cup contender. Jason Spezza lead the way with a league high 117 points (earning the AHL MVP) and brought the team back to contender form. The Senators ended the regular season with only 21 regulation losses, tied for 2nd fewest in the league, taking the division title with a league high 276 goals scored. The Senators entered the playoffs on a roll, winners of 11 of their last 13 games, and continued their dominance by cruising through the first 2 games of their first round best of 7 series against the , scoring 9 goals. But the offense inexplicably stalled and the Sens scored only 5 goals in the remaining 4 games as the Penguins answered back with the next 4 wins, crushing the hopes of bringing the Calder Cup to Binghamton for the first time.