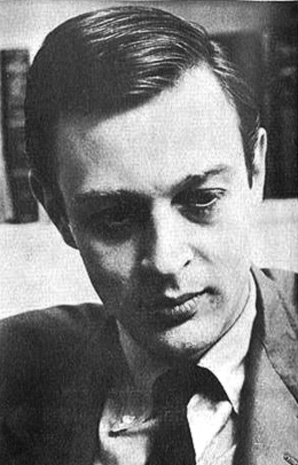 Richard Yates ( &ndash; ) was an American and writer. He was a chronicler of mid-20th century mainstream American life, often cited as artistically residing somewhere between and . He is regarded as the foremost novelist of the post-WWII Age of Anxiety.

Born in , Yates came from an unstable home. His parents divorced when he was three. and much of his childhood was spent in many different towns and residences. Yates first became interested in journalism and writing while attending in . After leaving Avon, Yates joined the Army, serving in and during the late 1940s and early 1950s.

In 1962, he wrote the screenplay for a film adaptation of 's "Lie Down In Darkness". Twice divorced, Yates was the father of three daughters: Sharon, Monica and Gina. In 1992, he died of and complications from minor surgery in .

Yates' first novel, "Revolutionary Road", was a finalist for the that year (alongside 's "" and 's ""). Yates was championed by writers as diverse as , , , and . Yates' brand of realism was a direct influence on writers such as , and .

Yates was also an acclaimed author of short stories. Despite this, only one of his short stories appeared in the "" (after repeated rejections). This story, "The Canal," was published in the magazine nine years after the author's death to celebrate the 2001 release of "The Collected Stories of Richard Yates."

For much of his life, Yates' work met almost universal critical acclaim, yet not one of his books sold over 12,000 copies in hardcover first edition. [cite journal
authorlink = Elizabeth Venant
title = A Fresh Twist in the Road For Novelist Richard Yates, a Specialist in Grim Irony, Late Fame's a Wicked Return
journal = Los Angeles Times
volume =
pages =
date = July 9, 1989
publisher =] All of his novels were out of print in the years after his death, though his reputation has substantially increased posthumously and many of his novels have since been reissued in new editions. This current success can be largely traced to the influence of Stewart O'Nan's 1999 essay in the [http://bostonreview.net/ Boston Review] [http://bostonreview.net/BR24.5/onan.html "The Lost World of Richard Yates: How the great writer of the Age of Anxiety disappeared from print"] .

With the revival of interest in Yates' life and work after his death, Blake Bailey published the first in-depth biography of Yates, "A Tragic Honesty: The Life and Work of Richard Yates" (2003).

*Yates was portrayed in an episode of "" as "Alton Benes", Elaine's taciturn and hard-driving father who has George and Jerry scared of him. Yates' daughter, Monica, once dated , the show's executive producer.
*In the movie "" the protagonist cites Yates as one of his favorite authors and adds that when he died all his books were out of print.
*In 's "", Lee () thanks Elliott (Michael Caine) for lending her "", which she says was great.
*Richard Yates was godfather to the veteran character actor John Lacy.
*Singer 's 1992 album title, "Eleven Kinds of Loneliness", was borrowed from Yates' 1962 collection of short stories.
*In "" Frankie Dunn () is seen reading a book by Yates.
*'s second novel, "", is named after Yates.