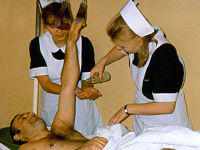 Nurses wearing a standard uniform consisting of a dress, apron and cap. 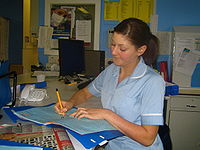 A British staff nurse in a 1980s style dress. 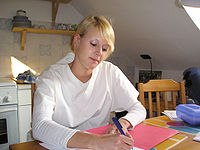 A German nurse in scrubs.

A nurse uniform is attire worn by nurses for hygiene and identification. The traditional nurse uniform consists of a dress, apron and cap. It has existed in many variants, but the basic style has remained recognizable.

The first nurse uniforms were derived from the nun's habit. Before the 19th century, nuns took care of sick and injured people so it was obvious that trained lay nurses might copy the nun's habit as they have adopted ranks like "Sister". One of Florence Nightingale's first students (Miss VanRensselaer) designed the original uniform for the students at Miss Nightingale's school of nursing. Before the 1940s minor changes occurred in the uniform. The clothing consisted of a mainly blue outfit. Hospitals were free to determine the style of the nurse uniform, including the nurse's cap which exists in many variants.[1]

In Britain, the national uniform (or simply "national") was designed with the advent of the National Health Service (NHS) in 1948, and the Newcastle dress.[clarification needed] From the 1960s open necks began to appear. In the 1970s, white disposable paper caps replaced cotton ones; in the 1980s, plastic aprons displaced the traditional ones and outerwear began to disappear. From the 1990s, scrubs became popular in Britain, having first appeared in the USA; however, a majority of nurses in Britain continue to wear dresses, as in many other countries.

Historically, a typical nurse uniform consisted of a dress, pinafore apron and nurse's cap. In some hospitals, however, student nurses also wore a nursing pin, or the pinafore apron may have been replaced by a cobbler style apron. This type of nurse's dress continues to be worn in many countries.

Since the late 1980s, there has been a move towards alternative designs of nursing uniforms in some countries. Newer style nurse's uniform in the United Kingdom consists of either: [2][3][4]

Male nurses wear a white tunic with epaulettes in the colour of their grade.

A "scrub dress" is a simpler type of uniform, and is sometimes worn in operating rooms. For outdoor clothing the nurse has a red jacket over the indoor Nurse uniform. If a nurse is seen outside in his or her uniform, this is a reprimandable offence and the nurse may be subjected to a review.[citation needed]

Traditional uniforms remain common in the Third World, but in Western Europe and North America, so-called "scrubs" or tunics have become more popular.

Beginning in the 1990s, and until the present time, the traditional nurse uniforms have been replaced with the "new" scrub dress in some countries. Most hospitals in the USA and Europe argue that the scrub uniform is easier to clean than the old nurse uniforms. The nurses who wear the uniforms are divided into two camps:

In many parts of the world, nurses continue to wear a white uniform consisting of a dress and cap. The traditional white uniform for male nursing staff is now going out of fashion, excepting for student nurses. A tunic of either the dental surgeon style or a v neck with a collar is very often used. The colours vary with grade, area of work, and hospital; however, the male equivalent of sister (that is, charge nurse) tend to be shades of blue or dark green: often, this is the only colour to be recognised by the public as signifying a person in authority.