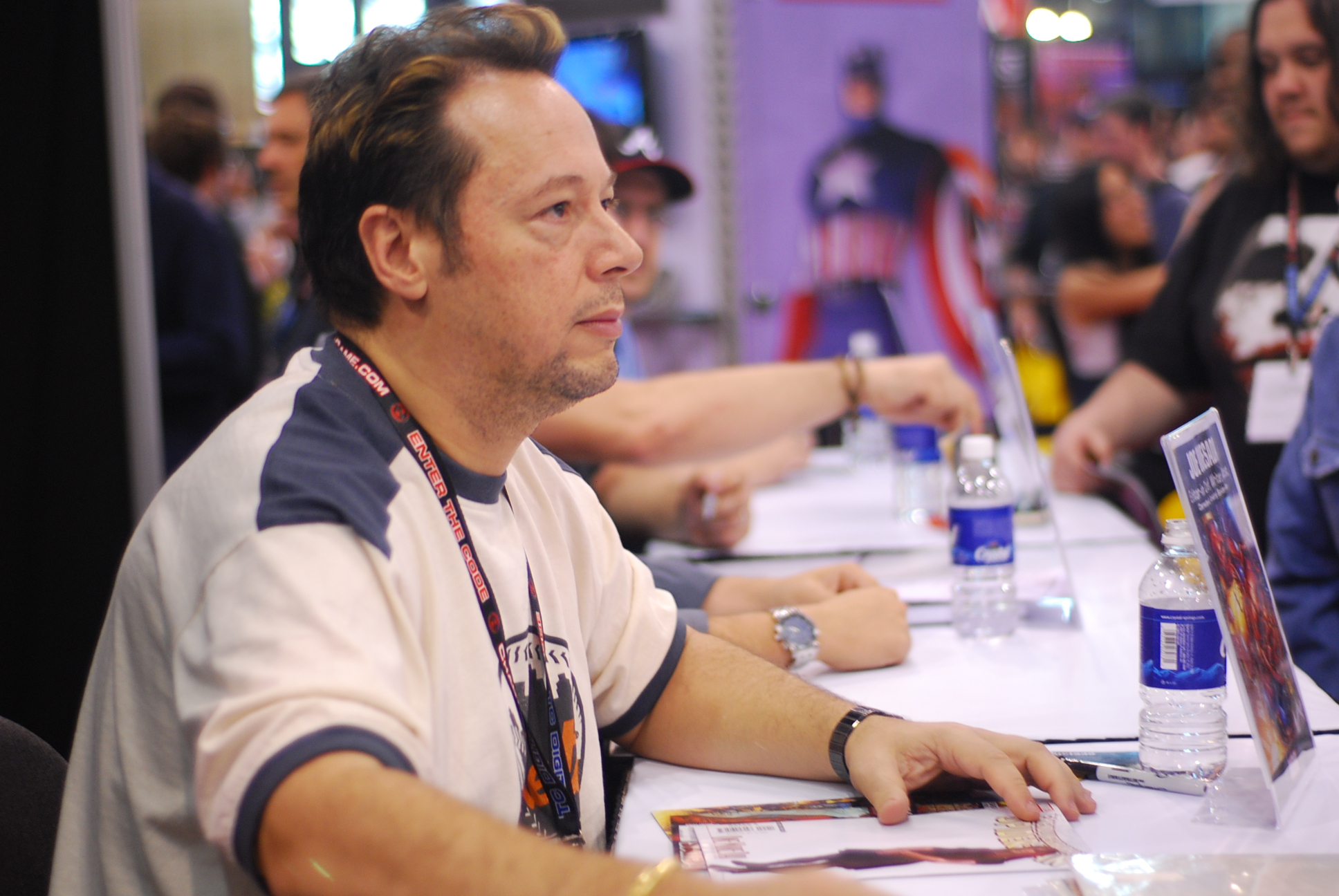 Joseph "Joe" Quesada (born ), is an American editor, writer and artist. He is currently the of .

Quesada was born in to -born parents. He studied at the , where he received a BFA in illustration in 1984. He started out as an artist in the early 1990s. His first widely distributed works were for where he penciled and plotted "", "", and others. His art was heavily influenced by Japanese manga, evidenced by large, watery eyes, long, flowing hair, and unnatural body proportions. Several of his page compositions reflect the style of . Later, he formed his own publishing company, , and created Ash, a with s.

In 1998, Event Comics was contracted to do several books for , dubbed "". As editor of Marvel Knights, Quesada encouraged experimentation and used his contacts in the indie comics world to bring in new creators such as , , , , and . Quesada also illustrated a well-received "Daredevil" story written by cult film director . Joe Quesada became of in 2000. He also sits on the executive board of comic book charity .

Quesada became Editor-in-chief at the same time that succeeded to the presidency of the company. The relationship culminated in the establishment of the Ultimate line of Marvel titles, which were aimed at teenagers, took place outside of the restrictive continuity of the . Jemas separated from the company after some time.

Quesada, however, was retained as editor-in-chief after Jemas's departure. With heading up Marvel's licensing division, Quesada focused on hiring new people and matching them with compatible titles, characters, and other creators. Examples of this among writers include on "", on "" and on "", "Daredevil", and "Avengers". His tenure has seen many worn-out titles rise once again to prominence in the sales charts, due to creative team changes, changes in creative and editorial direction, and relaunches, the most successful as of August 2006 being "New Avengers".

Quesada imposed a moratorium on the comic-book practice of creatively bringing back a character thought to be dead. In an interview on January 28th, 2008, Quesada explained his thoughts behind this policy. [http://www.comicbookresources.com/?page=article&id=12395; explained in an interview at CBR.] He also banned the use of editorial footnotes in comic books early in his tenure, though like the case with comic book deaths, this ban has since become relaxed.

Quesada has also banned Marvel characters from smoking, including Wolverine, Gambit, The Thing, and . This stems from his own father's death from lung cancer and his feeling that these characters, whom kids look up to, should not be seen smoking. [In the miniseries "NYX", written by Quesada, the protagonist, Kiden, does smoke.]

Joe Quesada's predecessor as Marvel editor in chief, , canceled and restarted all of Marvel's titles that were not either -related or at fewer than 100 issues already. This was an effort to shore up sagging sales with a new #1 issue for each of Marvel's popular titles, issued at a time shortly after the bust of the comic book collecting industry, and when Marvel was in the throes of bankruptcy. Quesada reversed this policy first by showing the "old", combined issue numbers beside the "new" numbers on covers (the difference between the two issue numbers shown on the cover would always be the number of issues that the series had before Harras restarted it), and then definitively restoring the "old" numbers for "Fantastic Four", "Amazing Spider-Man" and "Avengers" when they each passed the 500 mark. [In the case of "Avengers", this was short-lived; at writer Brian Michael Bendis's request, the book was later restarted as "New Avengers"]

Joe Quesada has been involved in the creation of three successful imprints:
* , aimed at older readers (before his tenure as editor-in-chief)
* MAX, aimed at adult readers, with
* Ultimate, aimed at teen readers, with Brian Michael Bendis and

Under Joe Quesada's guidance, Marvel Comics became an aggressive publisher of trade paperbacks, changing Marvel's marketing of them from a quiet aftermarket to a primary means of content delivery. Before Quesada's time, Marvel comic book collections were sporadic, releasing only tried-and-true stories from ages past and presented in such a manner to hide that they were ever monthly comics, without any clear indication of the individual titles or issue numbers. Under Quesada, Marvel publishes more trade paperbacks as an alternative to the monthly series they reprint, getting comic book collections into mainstream bookstores as well as specialty comics shops, often releasing weeks after the final collected issue, and as complete as the monthly issues, covering every issue of popular titles and released with volume numbers on the spine. This allows greater ease for casual readers to collect.

Even though Quesada's policy of complete and well-presented trade paperbacks was one of the central pillars that brought Marvel back from the brink of bankruptcy following the disastrous years of the late 1990s, critics charge that trade paperbacks cannibalize monthly comic book sales, because readers may opt to forego monthly series in order to wait for the cheaper collections, not realizing that monthly sales are an indicator to publishers of interest in such collections. [ [http://peterdavid.malibulist.com/archives/000870.html David, Peter; "WHAT'CHA WANNA KNOW?", , ; Writer Peter David expressed this sentiment in a question-and-answer thread on his blog, in response to an October 21, 2003 5:45 a.m. post.] ]

When confronted with a backlash by some fans due to his decision to dictate a controversial of Peter Parker's marriage to in the "" storyline, Quesada participated in a series of interviews on the subject to address the issue of the marriage, comparing it to real life marriages. He also promoted and praised the title "" for continuing to provide fans with a stable marriage and an expanded family. [ [http://www.comicbookresources.com/?page=article&id=12246; Interview 3 of 5 at CBR.] ]

At Megacon 2008, Quesada received the Sun Award for his achievements in the industry, he also announced that he was pulling "New Joe Fridays" from 's forums, and redirecting them to a account.

His talents were also called upon in the Kevin Smith film "" where he is credited as an artist for the opening sequence featuring fictional comic covers.