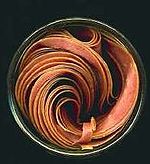 Chipped beef is thinly sliced or pressed salted and dried beef. Some makers smoke the dried beef for more flavor. The modern product consists of small, thin, flexible leaves of partially dried beef, generally sold compressed together in jars or flat in plastic packets. The processed meat producer Hormel once described it as "an air-dried product that is similar to bresaola, but not as tasty."[1]

Chipped beef is served in many diners and restaurants in the United States as a breakfast item. Creamed chipped beef is standard fare on many such diner menus, especially in the Mid-Atlantic and Northeast, but has become harder to find in chain restaurants that serve breakfast; among the restaurants still offering chipped beef on toast are Golden Corral and Silver Diner. IHOP no longer offers this on their menus, having substituted sausage gravy, and the same is true for Cracker Barrel restaurants. It is also available from companies such as Stouffer's in a frozen form which can be put on top of separately-prepared toast; It is typically quite salty, for instance, Stouffer's creamed chipped beef contains 590mg sodium per 5.5 ounces (160 g) serving.[2] The mixture was also, at one point, available from both Freezer Queen and Banquet as "hot sandwich toppers"; as of late 2007, Freezer Queen no longer makes this product, and the Banquet variety is rarely found. Finally, both the Esskay Meat Company of Baltimore and Knauss Dried Beef Company make a refrigerated version of creamed chipped beef which can be easily microwaved. The meat itself is also available for purchase under the Knauss, Carson's and Alderfer Brand names. 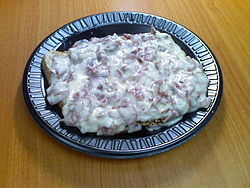 Chipped beef on toast (or creamed chipped beef on toast) is a culinary dish comprising a white sauce and rehydrated slivers of dried beef, served on toasted bread. Hormel recommends flavoring the dish with Worcestershire sauce and dried parsley. In military slang it is commonly referred to by the dysphemism "Shit On a Shingle" (SOS)—or more politely, "Stew On a Shingle" or "Same Old Stuff". Chipped beef is also often served on English muffins, biscuits, home fries, and in casseroles.

Wentworth and Flexner cite no origin, but note that "shingle" for slice of toast has had "some use since 1935" in the U.S. Army, mostly in the expression "shit on a shingle," and that the latter had "wide World War II Army use."[3]

At the end of May, the men of Easy packed up their barracks bags and … [took] a stop-and-go train ride to Sturgis, Kentucky. At the depot Red Cross girls had coffee and doughnuts for them, the last bit of comfort they would know for a month. They marched out to the countryside and pitched up tents, dug straggle trenches for latrines, and ate the Army's favorite meal for troops in the field, creamed chipped beef on toast, universally known as SOS, or Shit on a Shingle.[5]

In a 2004 story, Chuck Palahniuk talks about deprecated language in "the new and politically corrected Navy" where he says that in official theory, but not in practice:

the dark-blue coveralls crewmen wear while on patrol are no longer called "poopie suits." Crewmen who serve on the mess deck are no longer "mess cranks." Sauerbraten is not "donkey dick." Ravioli isn't "pillows of death." Creamed chipped beef on toast isn't "shit on a shingle."[6]

In The Bob Newhart Show episode entitled "Emily Hits the Ceiling,"[7] Mrs. Hartley and her friends plan to establish a summer camp for children; high on the list of planning priorities is establishing nicknames for the staff — the swim coach will be "Flipper," the nurse will be "Band-Aid." When colleague Craig reveals "Shingle" as the would-be camp cook's nickname, Emily says she does not get it. "We plan to go through a lot of chipped beef," he says. She says she still does not get it. "You have to have been in the Army," says Bob.

The Golden Girls episode "Bed Time Story" also referred to chipped beef. It was not liked when Rose cooked it. Dorothy voluteered to try it and the lights went out due to a power outage from a storm. Dorothy pretended as though she had eaten the chipped beef and the episode ends with Sophia adding spices and eating what Dorothy dumped off her plate into Sophia's purse.

In the film Peggy Sue Got Married, Peggy's sister, Nancy, asks "What's for dinner?", to which her mother replies, "Creamed chipped beef on toast with rutabagas; your father's favorite."