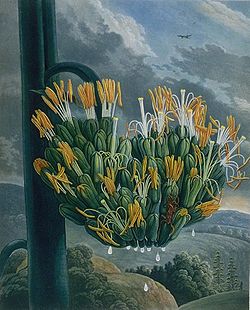 Agave americana, commonly known as the century plant, maguey, or American aloe (although it is in a different family from the Aloe),[2] is an agave originally from Mexico but cultivated worldwide as an ornamental plant. It has since naturalised in many regions and grows wild in Europe, South Africa, India, and Australia.[3]

The misnamed century plant typically lives only 10 to 30 years. It has a spreading rosette (about 4 m/13 ft wide) of gray-green leaves up to 2 m (6.6 ft) long, each with a spiny margin and a heavy spike at the tip that can pierce to the bone.

When it flowers, the spike with a cyme of big yellow flowers may reach up to 8 m (26 ft) in height. Its common name likely derives from its semelparous nature of flowering only once at the end of its long life. The plant dies after flowering, but produces suckers or adventitious shoots from the base, which continue its growth.

Agave americana was one of the many species described by Carl Linnaeus in the 1753 edition of Species Plantarum, with the binomial name that we still use today.

Subspecies and varieties of Agave americana include:

If the flower stem is cut without flowering, a sweet liquid called agua miel ("honey water") gathers in the heart of the plant. This may be fermented to produce the drink called pulque. The leaves also yield fibers, known as pita, which are suitable for making rope, matting, coarse cloth and are used for embroidery of leather in a technique known as piteado. Both pulque and maguey fibre were important to the economy of pre-Columbian Mexico.

Mezcal and tequila are different from pulque, they are distilled spirits. In the region of Tequila, agaves are called mezcales, and the high-alcohol product of their distillation is called mezcal. Tequila is made from Agave tequilana, comonly called "blue agave". Mezcal may contain the mezcal worm, which pulque and tequila do not.

Agave nectar, also called agave syrup, is marketed as a natural sugar substitute with a low glycemic index that is due to its high fructose content.

The plant figures in the coat of arms of Don Diego de Mendoza, a Native American governor of the village of Ajacuba, Hidalgo state.[6] The sap is quite acidic and can be quite painful if it comes in contact with the skin. It can form small blisters.

""Agave americana is cultivated as an ornamental plant for the large dramatic form of mature plants - for modernist, xeriscape|drought tolerant]], and 'desert style cactus gardens' - among many planted settings [7] The plants can be evocative of 18th-19th century Spanish colonial and Mexican provincial eras in the Southwestern United States, California, and xeric Mexico.