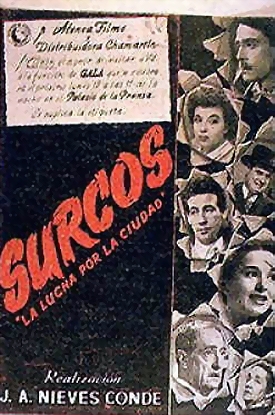 The film tells of an unsettling portrait of postwar Madrid when dictator was in power.

"Surcos" follows the struggles of a Spanish family as it emigrates from the country to circa 1950.

"Surcos" is considered one of the very few - if not the only - Spanish neo-realist films from the era when the style was being created and popularized in . The picture only escaped censorship because José María García Escudero, Spain's Chief of Cinematography, was progressive enough to value the film for its artistic merit. [Brennan, Sandra. amg name| id=2:104528|name=José Antonio Nieves-Conde.]

The film dealt with issues virtually unseen during Franco's rule, including rural immigration into the cities, poverty, prostitution, unemployment, and class conflicts. "Surcos" is a view of the contradictions found in Franco's regime. The Catholic Church considered the film "deeply dangerous," yet political observers labeled the drama of "national interest." The film was not released until its controversial ending was removed. [ [http://pragda.com/museum-modern-art-new-york-spain.php Pragda] . Spanish Film Club, 302 Bedford Avenue #136 Brooklyn, NY 11211, USA. Last accessed: , .]