Charles "Chas" Samuel Addams[2] (January 7, 1912 – September 29, 1988) was an American cartoonist known for his particularly black humor and macabre characters. Some of the recurring characters, who became known as The Addams Family, became the basis for two live-action television series, two animated TV series, three motion pictures, and a Broadway musical.

Charles Samuel Addams was born in Westfield, New Jersey, the son of Grace M. (née Spears) and Charles Huy Addams, a piano-company executive who had studied to be an architect.[3] He was "known as something of a rascal around the neighborhood" and "there was always a little group of boys at his house, doing things," as childhood friends recalled.[4] Addams was distantly related to U.S. presidents John Adams and John Quincy Adams, despite the different spellings of their last names,[4] and was a first cousin twice removed to Jane Addams, the noted social reformer.[5]:21

His nickname was "Chill", given to him by his friends.[5]:30 A house on Elm Street, and another on Dudley Avenue that police once caught him breaking into, are said to be the inspiration for the Addams Family mansion in his cartoons (though one site points to a three-way resemblance among the Addams Family mansion, the house in Alfred Hitchcock's Psycho and the Victorian building depicted in Edward Hopper's "House by the Railroad").[6] College Hall, the oldest building on the current campus of the University of Pennsylvania, where Addams studied, was also an inspiration for the mansion[7] He was fond of visiting the Presbyterian Cemetery on Mountain Avenue.[8] One friend said of him, "His sense of humor was a little different from everybody else's." He was also artistically inclined, "drawing with a happy vengeance" according to a biographer.[4]

His father encouraged him to draw,[3] and Addams did cartoons for the Westfield High School student literary magazine, Weathervane.[8] He attended Colgate University in 1929 and 1930, and the University of Pennsylvania, where a fine-arts building on campus is named for him, in 1930 and 1931. In front of the building is a sculpture of the silhouettes of Addams Family characters.[8] He then studied at the Grand Central School of Art in New York City in 1931 and 1932.[3][8]

In 1932 he joined the layout department of True Detective magazine, where he had to retouch photos of corpses that appeared in the magazine's stories to remove the blood from them. Addams complained that "A lot of those corpses were more interesting the way they were."[9]

His first drawing in The New Yorker ran on February 6, 1932 (a sketch of a window washer), and his cartoons ran regularly in the magazine from 1938, when he drew the first instance of what came to be called the Addams Family,[4] until his death. He was a freelancer throughout that time.[4]

During World War II, Addams served at the Signal Corps Photographic Center in New York, where he made animated training films for the Army. In late 1942, he met his first wife, Barbara Jean Day, who purportedly resembled the cartoon Morticia Addams.[4] The marriage ended eight years later, after Addams, who hated small children, refused to adopt one.[4] She later married fellow New Yorker colleague John Hersey, author of Hiroshima (book).[5]:106

He married his second wife, Barbara Barb (Estelle B. Barb), in 1954. A practicing lawyer, she "combined Morticia-like looks with diabolical legal scheming," by which she wound up controlling the "Addams Family" television and movie franchises and persuaded her husband to give away other legal rights.[4] At one point, she got her husband to take out a $100,000 insurance policy. Addams consulted a lawyer on the sly, who later humorously wrote, "I told him the last time I had word of such a move was in a picture called Double Indemnity starring Barbara Stanwyck, which I called to his attention." In the movie, Stanwyck's character plotted her husband's murder.[4] No one has accused Barbara Barb Addams of attempting the same. They divorced in 1956.[5]:136

The Addams Family television series began after David Levy, a television producer, approached Addams with an offer to create it with a little help from the humorist. All Addams had to do was give his characters names and more characteristics for the actors to use in portrayals. The series ran on ABC for two seasons, from 1964 to 1966.[8]

Addams was "sociable and debonair," and described by a biographer as "A well-dressed, courtly man with silvery back-combed hair and a gentle manner, he bore no resemblance to a fiend." Figuratively a ladykiller, Addams squired celebrities such as Greta Garbo, Joan Fontaine, and Jacqueline Kennedy on social occasions.[4]

Addams died September 29, 1988, at St. Clare's Hospital and Health Center in New York City, having suffered a heart attack while still in his car after parking it. An ambulance took him from his apartment to the hospital, where he died in the emergency room.[3] As he had requested, a wake was held rather than a funeral; he had wished to be remembered as a "good cartoonist". He was cremated and his ashes were buried in the pet cemetery of his estate "The Swamp".[5]:318

His cartoons regularly appeared in The New Yorker, and he also created a syndicated comic strip, Out of This World, which ran in 1956. There are many collections of his work, including Drawn and Quartered (1942) and Monster Rally (1950), the latter with a foreword by John O'Hara. Typical of Addams's work, one cartoon shows two men standing in a room labeled "Patent Attorney." One is pointing a bizarre gun out the window toward the street and saying, "Death ray, fiddlesticks! Why, it doesn't even slow them up!"

Dear Dead Days (1959) is not a collection of his cartoons (although it reprints a few from previous collections); it is a scrapbook-like compendium of vintage images (and occasional pieces of text) that appealed to Addams's sense of the grotesque, including Victorian woodcuts, vintage medicine-show advertisements, and a boyhood photograph of Francesco Lentini, who had three legs.

Addams drew more than 1,300 cartoons over the course of his life. Those that didn't appear in The New Yorker were often in Collier's and TV Guide.[8] In 1961, Addams received, from the Mystery Writers of America, a Special Edgar Award for his body of work. His cartoons appeared in books, calendars, and other merchandising. Singer-guitarist Dean Gitter's 1957 recording Ghost Ballads (Riverside, RLP 12-636), folk songs with supernatural themes, was packaged with album art by Addams showing a haunted house.

In 1946 Addams met science-fiction writer Ray Bradbury after having drawn an illustration for Mademoiselle magazine's publication of Bradbury's short story "Homecoming", the first in a series of tales chronicling a family of Illinois vampires named the Elliotts. The pair became friends, and planned to collaborate on a book of the Elliott Family's complete history with Bradbury writing and Addams providing the illustrations, but it never materialized. Bradbury's stories about the "Elliott Family" were finally anthologized in From the Dust Returned in October 2001, with a connecting narrative and an explanation of his work with Addams, and Addams' 1946 Mademoiselle illustration used for the book's cover jacket. Although Addams' own characters were well-established by the time of their initial encounter, in a 2001 interview Bradbury states that "(Addams) went his way and created the Addams Family and I went my own way and created my family in this book." [11]

Janet Maslin, in a review of an Addams biography for The New York Times, wrote, "Addams's persona sounds cooked up for the benefit of feature writers ... was at least partly a character contrived for the public eye," noting that one outré publicity photo showed the humorist wearing a suit of armor at home, "but the shelves behind him hold books about painting and antiques, as well as a novel by John Updike."[4]

In Alfred Hitchcock's North by Northwest, Cary Grant references Charles Addams in the auction scene. Discovering Eve with Mr. Vandamm and Leonard, he says, "The three of you together. Now that's a picture only Charles Addams could draw." The filmmaker was a friend of Addams', and owned two pieces of original Addams art.[12] Addams is also mentioned as "Chas Addams" in Edward Eager's fantasy novel Knight's Castle. 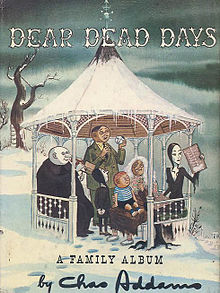 Dear Dead Days, with The Addams Family on the cover.

Books of Addams's drawings or illustrated by him[13]