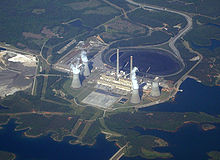 Robert W Scherer Power Plant is a coal-fired power plant at Juliette, Georgia, just north of Macon, Georgia. The plant has four units, each producing 880 megawatts. It has two 1,001-foot (305 m) chimneys, the first built in 1982 and the second in 1986. Plant Scherer is the fifth largest electric generating plant in the United States.[1]

The plant's location is along the flight path of many commercial airline flights originating from or terminating at Hartsfield-Jackson Airport in Atlanta, and is a prominent feature on the landscape, easily visible during daylight flights.

The coal used at the Scherer plant comes from Wyoming's Powder River Basin, and is delivered by BNSF from the mine to Memphis, Tennessee. From there, it is taken to the plant by Norfolk Southern in unit trains of up to 124 cars. Currently, at least three and as many as five trains a day are unloaded at Scherer. The trains use an air-dump system and are unloaded from the bottom of the cars while passing over the unloading trestle. They do not stop while unloading, and are usually unloaded in around 90 minutes.

According to Natural History magazine, as of 2006[update] Plant Scherer is the largest single point-source for carbon dioxide emissions in the United States.[3] It was also ranked the 20th in the world in terms of carbon dioxide emissions by the Center for Global Development on its list of global power plants in November 2007. It was the only power plant in the United States that was listed in the world's top 25 Carbon Dioxide producers.[4]