Economic globalization comprises the globalization of production, markets, competition, technology, and corporations and industries.[1] While economic globalization has been occurring for the last several hundred years (since the emergence of trans-national trade), it has begun to occur at an increased rate over the last 20–30 years.[3] This recent boom has been largely accounted by developed economies integrating with less developed economies, by means of foreign direct investment, the reduction of trade barriers, and in many cases cross border immigration.

International commodity markets, labor markets, and capital markets make up the economy and define economic globalization.[4] Beginning as early as 4000 BC, people were trading livestock, tools, and other items as a means of money. People residing in Sumer, an early civilization in Mesopotamia, came up with a token system that was seen as one of the first forms of commodity money.[5] Labor markets consist of workers, employers, wages, income, supply, and demand. Labor markets have been around as long as commodity markets. Labor markets grew out of commodity markets because labor was needed to grow the crops and tend to the livestock. The growth of commodity and labor markets grew into a capital market where companies and governments handle longstanding funds.[6] The process of this blending of markets in the economy took thousands of years to become what it is today.

By the early 1900s, it was rare to come across a town that was not influenced by foreign markets—whether it be in labor, prices, or any other policy of business.[7] With advances in ship building technology and the inventions of the railroad and telephone, communication with other parts of the country and world was readily available. Towns were no longer limited to what they alone could produce and what the next two towns over would trade with them. People everywhere had the accessibility and resources to obtain goods from the other side of the world. However, these great advances in economic globalization were disrupted by World War I.[8] Most of the global economic powers constructed protectionist economic policies and introduced trade barriers that slowed economic growth to the eventual point of stagnation which can be seen as a precurser to the Great Depression in the late 1920s.[9] This caused a slowing of world-wide trade and even led to other countries introducing immigration caps.[8] Globalization of the economy didn’t fully resume until the 1970s.[10] Today, advances in technology and computer networks, both as a way of sending and receiving information, have led to a worldwide globalization of the economy.[11]

According to China's prominent economist Gao Shanquan, economic globalization is an irreversible trend due to the fact that the world markets are in great need of science and information technologies. With the growing demands of science and technology, Shanquan states that with world markets take on an "increasing cross-border division of labor" that works its way down to every facet of globalized markets from both developed and developing nations.[12] 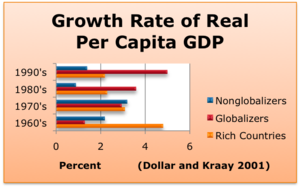 Despite many analysts' concerns about the inequality gap between developed and developing nations, there is no evidence to suggest that inequality increases as international trade increases. Rather, growth benefits of economic globalization are widely shared. While several globalizers have seen an increase in inequality, most notably China, this increase in inequality is a result of domestic liberalization, restrictions on internal migration, and agricultural policies, rather than a result of international trade.[15]

Economic globalization also has helped to decrease poverty around the world. Poverty has been reduced as evidenced by a 5.4 percent annual growth in income for the poorest fifth of the population of Malaysia. Even in China, where inequality continues to be a problem, the poorest fifth of the population saw a 3.8 percent annual growth in income. In several countries, those living below the dollar-per-day poverty threshold declined. In China, the rate declined from 20 to 15 percent and in Bangladesh the rate dropped from 43 to 36 percent.[15]

The final positive effect to be mentioned is the narrowing gap between the rich and the poor. Evidence suggests that the growth of globalizers, in relation to rich countries, suggests that globalizers are narrowing the per capita income gap between the rich and the globalizing nations. China, India, and Bangladesh, who were among the poorest countries in the world twenty years ago, have greatly influenced the narrowing of worldwide inequality due to their economic expansion.[15]

Several movements, such as the Fair Trade movement and the Anti-sweatshop movement, have worked towards promoting a more socially just global economy. The Fair Trade movement has played a significant role in alleviating exploitation due to economic globalization. For example, Fair Trade sales account for 1.6 billion US dollars each year.[22] The Fair Trade movement works towards improving trade, development and production for disadvantages producers. Furthermore, the movement works to raise consumer awareness of exploitation of developing countries. Fair Trade works under the motto of “trade, not aid”, to improve the quality of life for farmers and merchants by participating in direct sales, providing better prices and supporting the community.[23]

Economic globalization may have various strong impacts on different world cultures. Populations may mimic the international flow of capital and labor markets in the form of immigration and the merger of cultures. Foreign resources and economic measures may impact different native cultures and may cause assimilation of a native people.[24] Researchers are now studying the effects of economic globalization on the youth in various world populations such as Arab, South American, South East-Asian, Caribbean, and African populations. As these populations are exposed to the English language, Computers, western music, and North American culture, changes are being noted in shrinking family size, immigration to larger cities, more casual dating practices, and gender roles are transformed.

Yu Xintian wrote in a cultural impact study that there were two contrary trends in culture due to economic globalization.[25] Xintian argues that culture and industry not only flows from the west while effecting people, but he says there is also a cultural nationalization or an effect of localization that wishes to promote and protect individual cultures. He also points out that economic globalization began after WWII, where as internationalization began over a century ago and is something completely different.[26]

George Ritzer wrote about the McDonaldization of society and how fast food businesses spread throughout the United States and the rest of the world, forcing world populations to adopt fast food culture.[27] In this book, Ritzer also writes about how other businesses have copied the McDonalds Corportation's business model for expansion and influence. In 2006, 233 of 280 or well over half of the new McDonalds opended were overseas. In 2007, Japan had 2,828 McDonalds locations and serves as just one example of the globalized effect of international corportaions. The Body Shop, a British ecologically conscious cosmetic company, represents the process of McDonaldization working in all directions.[28] Various countries export their own versions of McDonaldization but have the same influences in standardizing world culture.

Global media news companies export information through news, radio, and internet. This creates a mostly one-way flow of information, and exposure of mostly western products and values. Companies like CNN, Reuters, and the BBC dominate the global airwaves while having a particular western point of view. Other media news companies such as Al Jazeera may offer a different point of view, but have a far smaller audience and thus effect fewer people in influence.[29]