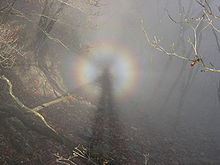 Brocken spectre. This is not actually on Brocken, but was taken in the Tanzawa Mountains in Japan; despite the name, the phenomenon is not unique to Brocken and can occur in any misty mountain region.

Night Brocken Spectre created by high lights of a car 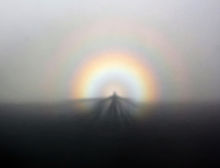 Solar glory, Spectre of the Brocken

A Brocken spectre (German Brockengespenst), also called Brocken bow, mountain spectre or glockenspectre is the apparently enormous and magnified shadow of an observer, cast upon the upper surfaces of clouds opposite the sun. The phenomenon can appear on any misty mountainside or cloud bank, or even from an aeroplane, but the frequent fogs and low-altitude accessibility of the Brocken, a peak in the Harz Mountains in Germany, have created a local legend from which the phenomenon draws its name. The Brocken spectre was observed and described by Johann Silberschlag in 1780, and has since been recorded often in literature about the region. However it can be seen in any mountain region.

The "spectre" appears when the sun shines from behind a climber who is looking down from a ridge or peak into mist or fog. The light projects the climber's shadow forward through the mist, often in an odd triangular shape due to perspective. The apparent magnification of size of the shadow is an optical illusion that occurs when the observer judges his shadow on relatively nearby clouds to be at the same distance as faraway land objects seen through gaps in the clouds, or when there are no reference points at all by which to judge its size. The shadow also falls on water droplets of varying distances from the eye, confusing depth perception. The ghost can appear to move (sometimes quite suddenly) because of the movement of the cloud layer and variations in density within the cloud.

The head of the figure is often surrounded by the glowing halo-like rings of a glory, rings of coloured light that appear directly opposite the sun when sunlight is reflected by a cloud of uniformly-sized water droplets. The effect is caused by the diffraction of visible light.

References in Popular Culture and the Arts

The Brocken Specter is a key trope in Paul Beatty's The White Boy Shuffle (1996), in which a character, Nicholas Scoby, declares that his dream, (he specifically calls it a "Dream and a half, really,") is to see his glory through a Brocken Specter (69).

...I had a dream which both frightened and encouraged me. It was night in some unknown place, and I was making slow and painful headway against a mighty wind. Dense fog was flying along everywhere. I had my hands cupped around a tiny light which threatened to go out at any moment... Suddenly I had the feeling that something was coming up behind me. I looked back, and saw a gigantic black figure following me... When I awoke I realized at once that the figure was a "specter of the Brocken," my own shadow on the swirling mists, brought into being by the little light I was carrying.[1]