Coffin ship is the name given to any boat that has been overinsured and is therefore worth more to its owners sunk than afloat. These were hazardous places to work in the days before effective maritime safety regulation. They were generally eliminated in the 1870s with the success of reforms championed by British M.P. Samuel Plimsoll. 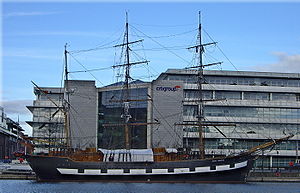 The "good ship" Jeanie Johnston, which sailed during the Great Hunger when coffin ships were common. No one ever died on the "good ship"

The term has also been used to refer to the ships that carried Irish immigrants escaping the Great Irish Famine as well as displaced Highlanders due to the Highland Clearances.[citation needed] These ships, crowded and disease ridden, with poor access to food and water, resulted in the deaths of many people as they crossed the Atlantic. Owners of coffin ships provided as little food, water, and living space as was legally possible – if they obeyed the law at all.

While coffin ships were the cheapest way to cross the Atlantic, mortality rates of 30% aboard the coffin ships were common.[1] It was said that sharks could be seen following the ships, because so many bodies were thrown overboard.[2][3][4]

Legislation to protect emigrant passengers, the Passenger Vessels Act, was first enacted in Britain in 1803 and continued to evolve in the following decades. A revised Act in 1828, for example, marked the first time that the British government took an active interest in emigration matters. Within a few years, regulations were in force to determine the maximum number of passengers that a ship could carry, and to ensure that sufficient food and water be provided for the voyage.

But the legislation was not always enforceable, and unscrupulous shipowners and shipmasters found ways to circumvent the law. In addition, ships sailing from non-British ports were not subject to the legislation. As a consequence, thousands of emigrants experienced a miserable and often dangerous journey. By 1867, regulations were more effective, thus providing people with the promise of a safe, if not comfortable, voyage.[5]

The National Famine Monument at the base of Croagh Patrick in Murrisk, County Mayo, Ireland depicts a coffin ship with skeletons and bones as rigging. Sculpted by John Behan, it is Ireland's largest bronze sculpture. The "Coffin Ship" was unveiled by then President of Ireland Mary Robinson in 1997 to mark the 150th anniversary of the Irish Famine.

In the Pogues song "Thousands Are Sailing", the ghost of an Irish immigrant laments, "...on a coffin ship I came / And I never even got so far that they could change my name."

Additionally, the Irish metal bands Cruachan and Primordial both have songs entitled "The Coffin Ships". Primordial's version was released on their 2005 album The Gathering Wilderness, whilst Cruachan's (unrelated) song was written for their 2007 album, The Morrigan's Call. The Australian/Irish band Clann Zú also makes mention of coffin ships in the song "Black Coats and Bandages".

Irish poet Eavan Boland mentions the coffin ships in her poem "In a Bad Light" from the collection In a Time of Violence, and in her memoir Object Lessons: The Life of the Woman and the Poet in Our Time.

The 1900 Dutch play Op hoop van zegen by the Socialist Herman Heijermans depicts a ruthless shipowner in a small Dutch village sending an unsound fishing boat out into a stormy sea - with the result that it is lost with all hands while the owner pockets the insurance money. The play is considered a classic of Dutch theatre and literature, and was adapted to film four times.

The Death Ship (German title: Das Totenschiff) is a novel by the pseudonymous author known as B. Traven which deals with sailors working on a ship which the owners want to sink.

Flogging Molly, a popular Irish band with punk tendencies, uses the term "coffin ship" in their song "You Won't Make a Fool Out of Me" from the album Float. The quote is as follows: "But green is the heart of your greed That much I can tell you may think you're the captain of me But I'm your coffin ship from hell"